Currently we astrologers wait with baited breath for Pluto to turn direct on 9th September 2008 for the last steps upon its journey through Sagittarius. For the past 13 years, Pluto has soldiered through the land of the centaur, exposing our ideals and beliefs and laying waste to the ground many have been built on. Pluto rules fear and in Sagittarius he has seen us obsessively fearing other’s religions and cultures and (hopefully) encouraging us to transform these fears into understanding. Where Pluto creates destruction, like a forest fire he leaves the land ripe for regeneration. I certainly pray that the havoc we humans have wreaked upon one another in recent years in the name of religion is something we can learn from. As Pluto moves into Capricorn, perhaps it is that during this period we will see the institutions that support outmoded belief systems crumble from within in order that a new structure with better foundations be eventually built. Pluto rules secrets and lies and those that are buried under the very foundations of our established institutions may well be brought to light in the years to come. Like Chinese whispers we have told each other stories ear to ear and the tale has changed with each telling. Pluto will refuse to whisper. His booming voice may well surprise the hell out of us – literally. Pluto says “If you’ve been living in a dreamworld, it’s time to wake up and smell the coffee” (organic and fair-traded please!).

I’m not a politician or an economist by any stretch of the imagination but it seems significant to me that the current credit crunch and falling house prices are occurring now. Whilst Pluto has been in idealistic Sagittarius, house prices have gone through the roof. Dreams of living abroad have seen us marching off to find cheap homes in new countries in order to make a ‘solid’ investment. It’s interesting that as the credit crunch has now really begun to bite, Pluto is moving slowly into Capricorn and will certainly be preparing to give us a kick in the backside and a large dose of reality come the beginning of the new year. As ruler of the underworld, Pluto has a connection to oil and fuel prices are currently beginning to dominate the news.

The positive side of all this is that whilst Pluto is busy tearing down what has been built over the last few years, what will remain should be honest and true. Pluto typically strips everything away and Capricorn’s ruler Saturn rules over the skeleton and teeth. It’s going to be a time of getting back to basics and looking at how the structure of our society is functioning. Pluto is about power and Capricorn about authority. Those in power may be seriously called into question. Conversely we may experience the effects of those who use power corruptly. (I would argue that we already are!). Instead of being ‘spun’ by the media, people may take a more serious attitude to the stories being fed to them and demand (Pluto) a more practical viewpoint and action (Capricorn). There also may be less of an emphasis on the future (Sagittarius) and more of a focus on the ‘now’ for the wisdom of Pluto reminds us that what we do now will affect our future. Time falls under the domain of Saturn and Capricorn so Pluto may remind us in no uncertain terms that time may be running out to make the changes necessary to save our planet from destruction by our own hands. 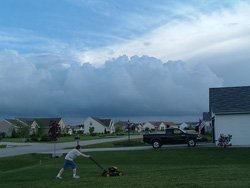 Right now Pluto is stationary on the 28th degree of Sagittarius. I’ve recently experienced a renewed interest in the Sabian symbols and  therefore couldn’t resist exploring the Sabian symbol currently being given weight by Pluto.

At this point, Pluto is asking us to take a close look at our relationship with the physical earth. The fat boy is a symbol of being out of touch with one’s own body. Mowing the lawn is a symbol of humankind’s attempt to control Mother Nature. Heedless that weeds can grow through concrete, we force nature to live with us instead of adapt to live with it. We complain about pigeons, rats and magpies yet dump our rubbish for them to eat. When we obsessively seek to control the outside world, the inner world falls into chaos. This to me is the message of the Fat Boy. Right now Pluto is asking us to look at what we are trying to control in our lives and what is the belief driving that. Are those beliefs working for good or ill?

On a personal level this question will set us up for Pluto moving into Capricorn. Right now Pluto is giving weight to this degree of the zodiac and questioning: –

Look to what you believe in. Does it still serve you?
What are you trying to control?
What must you let go of in order to be true to yourself?
What have you put your faith into?
Is the structure in your life working?

Looking at these questions I can certainly see the impending trine that Pluto is moving towards with my natal sun and the separating trine from Jupiter!

Pluto can be harsh when he wants to be but his energy is powerfully transformative. Harshness comes when we resist the process and resist change. Change is something that is with us in every moment of every day. Nothing ever stays still; even the stars above us are gradually changing their positions over billions of years. Of course some that we look at now have already died and been reborn. The more we seek to hold onto what we have, the more it slips through our fingers. Change is the only constant: this is the message of Pluto in Capricorn. Mow the lawn if you must but know that Mother nature is giggling in the background.