Home Tarot How I Came to Read Tarot 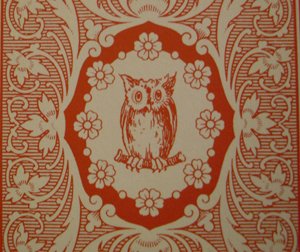 I’ve been thinking about my Grandmother a lot recently. She passed away back in 1987 and for some years after she made her presence felt. Then one day she came to me in a dream and said she was moving on, that there were no words to describe where she was going and I watched her pass into another dimension. Every now and then since that time I’d felt a very subtle presence but the sense was she had other things to do.

Recently however I’ve found myself talking about her more often and a week ago there was a large ‘spark’ in my living room late in the evening. She always used to come gathered in light, spooking my old cat (she never did get on with the feline species!) and offering comfort or advice gently impressed upon my thoughts.

It didn’t feel like a warning, just a comforting reminder. I dug through some old things stored away in boxes and found a poem she had written out by hand that she loved, an old brass bell evoking the smell of brasso and happy memories of helping her clean the brass and silver ornaments. And I found a picture – one that captured a day that marked a turning point in my life. One that I should never have put away.

My Grandmother died when I was 19. Around a year later I visited a psychic fair with my Mother. My Mother didn’t believe in ‘that kind of thing’ and yet held a conflicting thought that it was somehow all connected to ‘evil’. She wasn’t a religious person yet had a deep suspician of my growing interest in all things magical. So it was strange or perhaps understandable that on that day she decided to see a medium. The loss of her Mother had perhaps sparked a willingness to open up.

I spotted a woman straight away – elderly with fierce black hair and penetrating eyes. I was immediately drawn to her. My Mother went to sit with her and I wandered around the rest of the fair, astonished that my Mother had requested a reading. She said nothing about it afterwards but looked shocked and walked away. It was my turn.

The medium took my hands and placed them on her crystal ball. She asked me “Who is ‘M'” (saying the full first name) and told me he would be important in my life. This person has now been my best friend for 20 years. We’d known each other a few months by then.

She then smiled at me and calmly said “You will do my job, oh and you must do your music”. My eyes opened wider. Whilst I had a profound interest in all things magical, my goal at that time was to work for the BBC even though music and writing were my passions. I didn’t know what to think yet the truth of what she was saying struck deep into my soul. In truth I had spent most of my university years studying witchcraft rather than the English and Socialogy degree I was supposed to be studying! In those days I sang to myself quietly, never letting anyone hear me; not until I met ‘M’ whose ease at playing infront of another gave me the confidence to come out of my shell.

My hands were under the table by this point and she asked to see the ring I was playing with on my finger. It was my great-grandmother’s wedding ring, worn by my Grandmother and passed down to me. I took it off and gave it to her. I felt the air change, the crackle of spirit in the air.

She knew I sensed it but said nothing.

“There’s a photograph” she said slowly. “A photo taken on a day in Wales. You must always have this photo on display. She watches over you”.

I bit my lip. I knew exactly the photo she was talking about. It had been taken when I was around 14 years old. Nana had taken me on a day trip to Betws-y-Coed and I’d marvelled at being in another country with a whole different language!

The medium frowned then, struggling with something that was unclear.

“I see something else. It’s connected to an owl but I don’t know what it is. It’s something about that day.”

It didn’t make any sense to me. Whilst I remembered our day trip, the details of the day itself were fuzzy. There had been 6 intervening years and many other days out. But I accepted the information. I could relate to the image of the owl. Birds had become messengers to me as they had been to my Grandmother. I stored away the words for future reference. The medium gave me a small glass blue stone and asked me to keep it. Through several moves and 20 years I have managed to keep this stone with me.

Fast forward a couple of years. By this time I had purchased a new set of tarot cards, continued to keep my dream diary and was walking the path of the witch. I was also lost, lonely and seriously depressed. Childhood issues had come to smack me right in the face and I suffered a severe breakdown at the age of 21 as soon as I left university. Having found my singing voice, I got through by busking on the streets of Manchester. I was so poor that I was seriously grateful when people gave me food. My confidence and self-esteem were pretty much on the floor. The light of my life at that time aside from my friend ‘M’ was my dog Luka who went everywhere with me, including busking.

One particularly grey day, a man came over to me and insisted I move. Now I was used to being moved by the police on occassion but this guy wasn’t in uniform and wasn’t very polite either!

Rattled, I refused to move until he shoved his CID badge infront of my nose and told me in no uncertain terms to go away! I went.

Pretty much sick of everything I walked straight to the local job centre and within seconds saw a job. ‘Tarot Readers Wanted’. Twenty minutes later I walked into a job interview complete with guitar and dog! Unphased, the interviewer asked me to read the cards for him. I still remember staring down at the unfamiliar Tarot of the Cat People deck and thinking “I can’t do this!” and suddenly I opened my mouth and said what I could see. Within another 10 minutes I had a full time job.

It was a tarot line of course, the experience of which I will talk more of in another post but I want to bring you back to the fierce medium and the clouded picture of the owl.

Perhaps in honour of the lady who had foreseen my future, I took a wooden owl to work with me on my first day as a kind of talisman. Within a week of working at the Tarot line, I developed a serious crush on one of the readers. Some time later we came to have a brief love affair. He nick-named me ‘owl’ after my talisman. Just before we got together he suddenly saw my face and at the same time heard the call of an owl. The spirit of the bird was truly with me by then.

He had a gift for me one day. I smiled as I took it, a small box wrapped in tissue paper.

“I saw these and thought of you” he said.

Inside was a box of fortune telling cards. Madame Lenormand said the box.

Suddenly everything came flooding back to me.

Somehow in the midst of time I had forgotten the present she had bought me that day. I was catapulted back to the moment I saw the cards in amongst the Welsh dragons and dolls in a tiny souvenir shop . She bought them for me although professed to not really know why I would want them. I played with them for a while, perhaps a few months or so then forgot about them. I never did find out what happened to them.

I took the cards out of the box and every image came flooding back to me: my quiet attempts at reading my future. My hopes and fears. The picture of the ship on the ocean that over time had become a picture in a book I’d once read. There they were again, in my hands. I smiled and blinked back tears.

“I can’t believe you bought me these” I said to him.

And there on the back of every card was an owl.