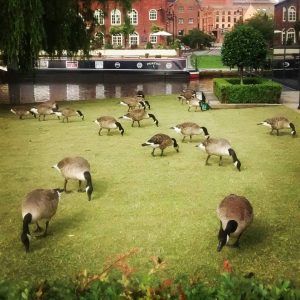 I thought I’d tell you a story of something that happened to me a few weeks ago. Birds have for many years been messengers for me and I’ve had the oddest of experiences in the past which no doubt I will share with you in time. This is just one of those strange occurrences…

I was walking home from town. I live only a 10 minute walk away from a city centre in England so whilst wild animals do make their home here, it is somewhat unusual to see much beyond the usual magpies and pigeons. I love to walk, my mind wanders and I enter a dream-like state but that day I can’t really remember thinking of anything much beyond what I was going to make for tea when I got home. The main road beside me was busy, roadworks were noisy and the grey street looked pretty much the same as everyday.

A strange insistent sound crept into my thoughts, intermittent and getting louder. A man was walking towards me up the street, still some way away. The sound got louder and my mind finally recognised it.

I turned to look behind me and there gracefully flying towards me came two large geese with long black necks and dark brown plumage. They flew slowly and low and called as they came. I swear they had their eyes on me. I stopped dead in the street, staring at the geese flying straight towards me. As they reached me they were so low I could have reached up my hand and touched their feathers. Above my head they honked loudly seeming almost to stop in the air and then immediately turned and flew in a wide circle up and away, back towards the way they’d came from.

By this point the man in the street had reached me and his face looked surprised and slightly spooked. He looked to the birds and then back at me. I swear he’d watched the film Carrie!

Yes occasionally I’ve heard geese flying over in the city but they’ve always been the traditional white goose that many of us are used to. The different breed seemed important and the surreal nature of the event, witnessed by someone else made me instinctively aware that this was synchronicity at work.

I ran through my general associations with geese which mostly came from my days growing up in the countryside. Mostly I considered them animals of protection – they make good guard dogs! The goose is sacred to the Roman Goddess Juno who was married to Jupiter. There’s Mother Goose, ‘what’s good for the goose is good for the gander’ and of course the fairy story of the goose who laid golden eggs. Geese also mate for life and are connected to loyalty but there was something I knew I was missing.

I discovered that ‘my’ geese were Canadian Geese so a read some about their nature and patterns.

Something I read struck me: geese will never leave a sick or injured bird behind. They will always send one bird back to stay with the fallen until they die or fly again. They show great compassion as well as loyalty. Without going into personal details, this message came home to me – a previous intuition validated. It was a confirmation. A friend also pointed out that as I look after another, spirit looks after me.

The strangest of things can happen in the most mundane of places or at the most unexpected of times. It is in these quiet moments that the universe can communicate and the ordinary movement of two geese flying can become an extraordinary moment that tells me all things are as they should be and not only is the universe communicating but it is listening too.