Home Astrology Forecasts Beltane – The Fires of the Bull 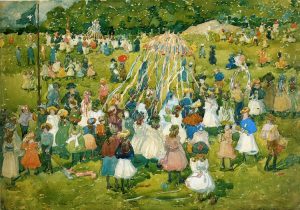 The apple and cherry trees are heavy with blossom. Whilst the air still contains a chill, the Sun is warm. I leave my coat at home more often these days and wait for my freckles to appear. I’ve been planting seeds under a Taurus Moon and tending to seedlings that have already appeared. As a Taurean of course this is my time of year and it should be no surprise that I’m growing salad and spring onions (plants I can eat) and marigolds and calendula (because they ward off pests are are therefore functional). I also grow cornflowers because the deep, soft blue seems to speak to me probably because the colour resonates with the throat chakra which in turn is ruled by Taurus. I’m starting to see projects blossom that I put work into earlier in the year. I notice couples kissing, butterflies, male pigeons strutting their soft pink plumage, a blackbird singing his summer song at dusk. All around me the Earth has come back to life and you can see it in the twinkling eyes of strangers drinking coffee outside in the mid-afternoon glow. Under the tender caress of the growing sunlight, the Earth shivers in delight and adorns herself in verdant green and in rainbows of petals.

On April 30, those of Pagan persuasion celebrate Beltane (also spelt Beltaine). At May Eve we honour the bel-fire; the lucky flame and in turn we are honouring the glorious Sun in his burgeoning warmth. Beltane is one of the cross quarter day festivals. Whilst traditionally we celebrate on April 30/May 1, astrologically Beltane occurs when the Sun hits 15 degrees of Taurus. Beltane is the midpoint festival between Spring Equinox (0 degrees Aries) and Summer Solstice (0 degrees Cancer). This year the Sun reaches astrological Beltane at 13:25 (BST) on May 5, 2022. If you look at the eight Pagan festivals throughout the year, you can see each takes a flavour from the astrological sign under which they fall. Note that the connection between sign and season relates to the Northern Hemisphere as this is where western astrology developed.

Taurus is an earth sign ruled by Venus. At this time of year the Earth is like a blushing maiden in the Northern hemisphere, decked in white and pink and a beautiful sight to the Sun who reaches out his long arms of light to embrace her. We crown the Queen of May in the village festival and watch the intricate dance around the phallic maypole. Taurus delights in the act of love.

Taurus loves to get down and dirty whether it’s in the sweet-smelling fertile soil or languishing with a lover. Beltane is a festival of pleasure and a time to remember your connection to the Earth. It’s a time to value your body and remember you are a product of creation and in turn you can create! The associations with sex at Beltane come from the idea of sympathetic magic. People would go off to the woods to make love to re-enact the bringing together of the Lord and Lady (The Sun and the Earth) which gives birth to summer and brings the promise of a bountiful harvest.

Fire in honour to the Sun is also part of the Beltane rites. In olden times cattle were driven through two fires to protect them as they were then sent to Summer pastures. In some places it was said to prevent the fairy folk stealing the milk. Young couples would bless their union by jumping the Bel-fire and travellers would jump the fire before embarking on a long journey. Fire is cleansing. For a modern day twist you could cleanse with sage or lavender or  jump over a lit candle (be careful, I take no responsibility for burnt long skirts and carpet!).

The merry month of May was named after the Goddess Maia who appears in both Greek and Roman mythology. In the Greek myths she was the oldest and most beautiful of the Seven Sisters who we have come to know as the Pleiades. The Pleiades lie in the constellation of Taurus. Maia was the daughter of Atlas and mother to Hermes who invented magic and writing amongst his many other talents. Therefore she is sometimes referred to as the Grandmother of Magic. Maia was also recognised by the Romans as the Goddess of Spring. In Roman myth she gave birth to Mercury via Jupiter. The name Maia means ‘great one’, ‘Mother’ or ‘midwife’. I find it interesting that in Portuguese the word for more is mais and the word for bigger is maior. Perhaps it’s just coincidence but then languages are connected. In Latin ‘maiores’ can also relate to ‘ancestors’, those who are greater.

And yes, as I come back to update this article thirteen years after I originally published it (!), I now know there is also an asteroid Maja – number 66, named after Maia. Take a look at where she is in your chart to find an essence of the spring maid, a place where you need to be playful, dance, create, experience delight. There will be more I know as I study her more deeply but for now, these are the things that spring to mind – pun intended!

Beltane is a time to celebrate the greatness of the Earth Mother and her union with the Sun. In my own chart, Beltane (15 degrees Taurus) falls in my 10th house. Perhaps in this lifetime, I am given the task of bringing a creative element to my vocation. There is a need for me to bring love to others and also find pleasure in my professional life – to love my work. This only serves to add some further confirmation to the Venus ruled 10th house and Venus conjunct MC in my chart. I aspire to express love! It can be useful to bring together your Beltane celebration with your astrological knowledge and focus on the area of life (house) in which your natal Beltane degree falls. What can you bring together now in that part of your life? What is being created? Where is the pleasure? What value do you give and receive?

Ideally get out into the countryside or at least a local park for the day and see the wonder of life all around you. Take your lover for a romantic walk (or stay in!) or treat yourself to a massage. Eat good food full of vitality and allow yourself a little indulgence too. It’s a perfect time to put away old winter clothes and buy or create new summer ones. Put on some music and dance or sing the Summer in. Venus loves both. Buy flowers or plant some seeds or take up a paintbrush and express yourself in glorious colour with wild abandon! May all your seeds bear fruit!

If you would like to read about the chart for astrological Beltane this year, click here to join my Patreon.