“Jupiter and Uranus meet every fourteen years. When they do, revolution and innovation  join forces with restless exploration and the quest for knowledge.The result is always exciting, educational and unpredictable. Or is it ?” 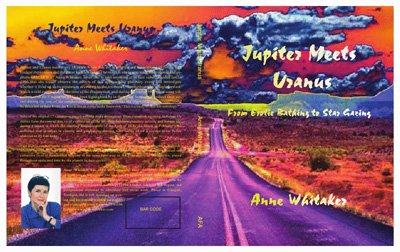 Centred around the Jupiter-Uranus conjunction of 1997, Anne has meticulously gathered evidence of the manifestations of this contact on both global and personal levels. By observing worldwide events and working with a team of individuals who volunteered their own charts and lives, traditional interpretations of this conjunction are put to the test.

Anne Whitaker has been a practising astrologer since 1983 and holds a Diploma from the Centre for Psychological Astrology. She is also a gifted writer. As a regular reader of Anne’s blog, I find her writing style insightful and accessible and she has a wealth of wisdom and experience to share. Her book has been very well received by well known names in the astrological world.

“ I have read your book – and enjoyed it very much. It is truly a fine piece of work and packed with so much information…”  Juliet Sharman-Burke, administrator of the Centre for Psychological Astrology (London), author of a number of books on the Tarot, and co-author (with Liz Greene) of “The Mythic Tarot”, “The Mythic Journey ” and “The Astrologer, the Counsellor and the Priest”

“Colourful, insightful and painstakingly researched, there is simply no other study of its kind available.” Frank Clifford of Flare Books(UK), and Principal of the London School of Astrology

With endorsements such as these and the vivid cover which to me captures the very essence of  Jupiter-Uranus conjunction I am very much looking forward to adding this to my bookshelf. A full review will follow in the next few weeks.