I read “Jupiter Meets Uranus” in one sitting. Anne Whitaker’s writing style is so engaging, her research so fascinating, that a lot of the time the book reads more like a novel: a page turner of the astrology world.

I have to say that I’ve never been hugely interested in mundane astrology – much like I have never been one to watch the news or engage in any kind of political thought whatesoever. At school I loathed the history of the industrial revolution and the interminable time spent on ‘Peat Bog Man’. What we learned seemed out of context and I felt no relation to it. Perhaps it is my Aquarian Moon and my overwhelming 9th house that pushes me relentlessly to look to the future rather than engage with the past.

So it was with these thoughts in mind when scanning the content of the book that I felt I would probably find the personal experiences of the the author’s research subjects more interesting than the collective experience. I was wrong. Both were fascinating. Anne Whitaker achieved for me what my poor history teachers at school never managed: to show history in context of its cycles and give me a sense of meaning and belonging to the great over-arching stories that manifest over centuries in our collective experience. Where before there had only been boring facts and figures, now there were archetypal stories being played out on a grand scale, synchronicites beyond explanation. 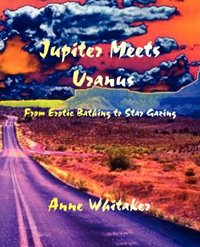 The book covers the history, myths and legends behind each planet giving the reader a wonderfully full picture of the energy of each. She then moves into generally exploring the cycles of the collective planets before moving into a more concentrated overview of the Jupiter-Uranus conjunctions. A meticulously researched section on the mundane happenings of when Jupiter and Uranus touched on the ‘hotspot’ in Aquarius kept me completely enthralled and also reminded me of long gone headlines that had managed to stick in my mind. For example – whatever did happen to the Raelians and their supposed cloned children? The connections that Anne found during her time of research were fascinating and sometimes staggering; almost beyond belief yet there in black and white. It certainly stimulated the desire in me to look more closely at mundane astrology.

The often sparsely edited answers from Anne’s research subjects found me strangely touched. Here they laid out their lives in their own words, from death and disaster to love and goals achieved. From heartache to heart’s desire, I felt moved by many of the insights and feelings expressed. One in particular who described much of his experiences through dreams captured my attention. I think I felt moved because it is not often we stop to think about our own lives and look through a long-view lens. Reading the unfolding stories of those who had responded to the author’s questionnaires over a period of time made me think a lot about my own story, the over arc that bridges what can seem like a time of devastation to a time of completelness. It is easy to forget, lost in the details of daily life, that there is a bigger story happening.

After a close look at the effects of Jupiter conjunct Uranus during 1997, the author then moves on the explore this in connection with the greater cycle of Neptune as the mysterious planet activated the hotstop point between 1999 – 2002

This caught my attention as it related strongly to a difficult period that happened in my own life at the time. Whilst my Moon sits just outside the hotspot of 4 – 7 degrees Aquarius (at 8 degrees) part of me strongly recognised that I too had been touched by the Jupiter Uranus conjunction and the later Neptune activation. My Mother died of a brain tumour during this time as Neptune hovered near my Descendant (6 degress Aquarius) making ready to move into the 7th house. Neptune by the way rules my 8th house.

The actual Jupiter-Uranus conjunction of 1997 occured in my 6th house within 1 degree of my descendant. I have no diary entries to recall specifics, only dream diaries. My dreams that year were vivid and elaborate and seemed split into two camps of either intensely spiritual dreams where I met Gods and Goddess (Isis and Osiris a lot it seemed!) or other spiritual beings. Or they were dreams of violence and danger, a feeling of suffocation and often a terrible fear of losing my animals (note that the 6th house rules pets as well as health, sickness and daily life).

Perusing my dream journal of that year, a couple of things jumped out at me. On the 26th January, a few short weeks before the conjunction became exact, I had an odd dream where the earth had been taken over by reptilian aliens who transformed humans. In the dream I said “we have to co-join with Uranus before anything happens”. This is quite amazing to me since during that year I wasn’t actively studying astrology! A follow up ‘aliens taking over dream’ occurred on the 23rd February. The exact moment of conjunction was on the 16th Feb. During May that year I dreamed of an electrical fire and a lightening bolt killing a man and in the September I dreamed of a white horse which lead me to write ‘today I discovered Jupiter is connected to the symbol of the white horse’. Deep down some part of me sensed the powerful conjunction as it triggered my Asc/Desc axis.

Reading Jupiter Meets Uranus has left me with many tantalising questions. The author doesn’t spoon-feed the reader. She presents the charts of her subjects and their words and leaves it up to us to look further into it. Woven into her writing are quotes ranging from Shakespeare to Milton and some excellent recommendations for further reading. Certainly this book has given me a thirst for research (pleasing Virgo on the cusp of my 2nd house!) and shown how much potential there is for further research into planetary configurations and cycles.

Anne Whitaker is a talented writer who stimulates the imagination of the reader whilst given them a wealth of information. You will be astonished by synchronicity and amazed at the astrological connections between for example Dolly the Sheep and Mary Shelley or the discovery of America and the Moon landing. I look forward to reading more from her in the future.