It may seem strange for me as an astrologer to pay homage to an astronomer: even more so to one who certainly wasn’t that interested in astrology. That said, I do believe Sagan was open-minded enough to think that just because it hadn’t been ‘proved’ didn’t mean it was rubbish. This was afterall the man who wrote Contact (one of my favourite movies!) and was a strong proponant of the search for alien life. Through his enthusiastic support, the SETI project became respected in the scientific community.

Carl Sagan would have been 75 today and I have a deep respect for him. In a curious twist of fate, he is one of the key figures in my life that drew me to explore the stars and eventually to become an astrologer. 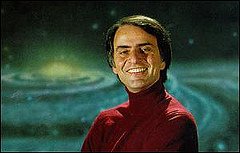 The series Cosmos blew my mind open to the extraordinary universe. Allowed to stay up late one night a week to watch this innovative series, my parents would be lulled into sleep by Carl’s beautiful calming voice. I on the other hand would sit leaning forward, straining to catch every word and understand every concept as he took us on a journey to the stars. I would retire to bed thinking of the enormity of it all, wonder what would become of me if I fell into a black hole, wonder what the universe was expanding into…

Even now when I hear the first bars of the Cosmos theme tune I get butterflies in my stomach; the echo of the sheer excitement and anticipation I would feel.

I may be an astrologer working intuitively, exploring all that is mystical but Carl Sagan too was a visionary. An extraordinary man, he was willing to change the face of his discipline, to fly in the face of convention. Amongst the billions upon billions of stars, he shines brightly both in my memory and in history.

You can watch Cosmos for free at Cosmo Learning
A variety of video’s can also be found on You Tube. Just search for ‘Carl Sagan’.