Having finished my work for the day yesterday, I decided to amuse myself with casting a horary chart entitled “Will Manchester City Win?” For those of you outside the UK, the city of Manchester is split into two factions when it comes to football – you are either RED (Manchester United) or BLUE (Manchester) City. Yesterday evening was a clash between the two teams, fighting it out for a place in the Carling Cup Final.

I hasten to add that I am neither a Red or Blue. I have friends and colleagues in both camps who are avid and passionate supporters but my footie interest has never extended that far. Most people are surprised to discover the this hippy type, astrology loving, tarot reading, dream-walking lady has any interest at all in football. But sit me in front of an international match in which Portugal are playing and you’ll find that I can shout at the referee with the best of them

International football is my secret thrill that I occassionally indulge in and I’m a sore loser; in my defence I have got Mars in the 10th together with a healthy does of Aries in my chart!

I have flirted with horary astrology. Coming from a background in tarot, I am fascinated with the divinatory aspect of astrology. To me, everything is connected and the right question asked at the right time will yield a relevant chart. Whilst I have spent a little time over the years reading horary rules, I have not yet studied this in depth, preferring instead to simply work with the symbolism of the chart to see what is suggested.

I had no vested interest in the results of this match, nothing but a genuine curiosity to see whether astrology could connect with the sporting world. To my surprise, a quick look on the internet yielded some interesting articles on sport’s astrology which I have included below. It’s true that you learn something new everyday!

Anyway, I cast my chart at 6pm (and 47 seconds if you wish to take a look yourself). Locality Manchester, UK.  I had already decided that Manchester City would be shown by the Ascendant and Manchester United by the Descendant as it was Manchester City I was initially enquiring about. Take a look at the chart yourself… 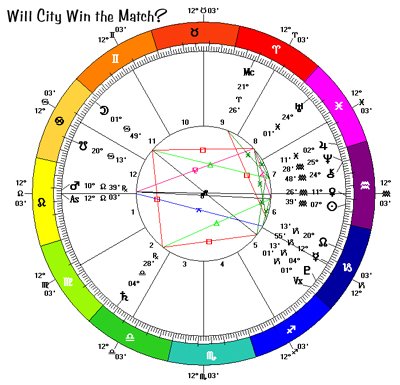 My first thought was wow – Mars (The Red Planet) is conjunct the Ascendant. Red is Rising. That in itself made me think that was a cosmic pointer hinting at victory for the Reds. But as Mars was on the side of the Blues I felt as though this wasn’t going to be an easy match by any means. They had a fight on their hands.

Next I looked at the chart as a whole. Notice the preponderance of planets in the Western hemisphere. The ‘weight’ is with the opposition. More importantly, the Sun (ruler of the Ascendant and therefore of Man City) is also placed on the western side of the chart opposing the Ascendant and Mars. Joy (Jupiter) is also significantly placed with the opposing team in the 7th house.

I looked then at the Moon. What is immediately obvious is that the Moon is strong in her own sign in Cancer. Admittedly she is under stress with the squares to Uranus and Saturn but she is ‘at home’ in Cancer. Cancer also is the sign of the zodiac that rules ‘home’. So the ‘home team’ again have the emphasis.

By this point I was seriously feeling that Manchester United really had the stars in their favour. The Midheaven (the highest point of the chart) is situated in fiery Aries, ruled by Mars. Whilst I noted that Mars is currently retrograde I felt that this did not seem to detract from the overall message the Red was in the air and on the up.

Looking further, malefic Pluto is brooding in the 5th house of gambling and games, not a good position for City and grumpy Saturn is stuck in the 2nd house suggesting that survival is at stake.

Lastly I simply stared at the chart, seeing three planets in the 7th house of the opposing team and one planet on the Ascendant. 3 – 1 I thought to myself, to United. The three red goals also seemed to be written into the 3 squares between the Moon and Uranus, the Moon and Saturn and Saturn and Pluto.

Looking to the series of short notes I made when I read the chart, the only main error I could see was that I had wondered if a goal may come from United via a penalty or free kick because of the confusing presence of Neptune but this did not manifest.

I cast and interpreted the chart well before the game started. I kept my thoughts to myself however because on the one hand this was a completely new practice for me so I wasn’t sure how well it would work, and two because I didn’t want to scare my Blue friends 🙂

I am sad for the Blues and happy for the Reds. I have no allegience so I can commiserate or celebrate with either. But I am certainly fascinated to find the wonderful synchronicity between the cosmos and the beautiful game. Sport’s astrology isn’t a professional branch that I particulary want to follow but it has made an interesting exercise.

If any of you have any further thoughts on this chart or your experiments with sports astrology, I’d love to hear them.

In the meantime, here are some useful links: