When I began to meditate on this in preparation for this post, all I could see in my imagination was Tigger bouncing around and singing :-

Mercury in Sagittarius is a breath of expansive fresh air after the serious fixed thinking generated by his transit through Scorpio. In this sign, Mercury encourages us to shoot for our dreams; create a vision of the future. He urges us to broaden our horizons and take ourselves higher than we have before.

In opposition to Gemini however, Mercury is in his sign of detriment meaning that he has difficulty functioning. A planet in detriment isn’t necessarily weak. Speaking as someone with Venus in detriment in Aries, I find that the energy of the planet can be very strong – so much so that it can be ‘detrimental’ to itself!

Whilst Gemini seeks out information, Sagittarius considers the meaning behind all and is far more concerned with the Big Picture. Mercury in Sagittarius can struggle with putting together what he has discovered; important facts can be missed. In transit through Sagittarius, Mercury encourages us to listen to the world. The richness of variety in world languages is beautiful and inspiring but it can also lead to a babble of voices that make no sense. Remember the story of Babel. Too much creative mental input can be as problematic as not enough.

In Sagittarius, Mercury becomes the storyteller, weaving words and spinning dreams. There is a philosophical edge behind every chapter, even a moral maze. The mind can become caught up in the drama or entangled in ‘truths’. Occasionally Mercury in Sagittarius forgets that their truth may not be everyone else’s truth. Thinking can be rushed and there can be a tendency to speak before thinking. This can lead to a classic Sagittarian trait of ‘tactlessness’.

Transiting Sagittarius, Mercury gives us the opportunity to share what we have learned with others and recognise the wisdom we have encountered along the journey through life. It is an excellent time to begin a course of study, take a trip to far away destination or explore texts that help to change your beliefs.

This transit stimulates creativity in the mind and if you are a writer, there can be no better time to brainstorm ideas. Just make a notes of whatever comes to mind and later when Mercury moves into Capricorn, you can start to build upon them. 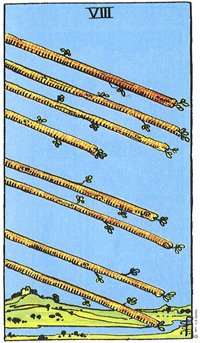 In the tarot, Mercury in Sagittarius relates to the 8 of Wands. For me, this card often appears to signify the internet. I adore the web and love the vast wealth of information available within in but also it can be overwhelming with so many paths of interest to follow. Typically when this card appears, it indicates that life is about the speed up; communication is coming in. There are often rapid developments in a short period of time.

In the Rider Waite deck, eight wands leap across the card. Each wand is a branch with green shoots representing the beginnings of creative ideas. Notice however that all but the lowest wand are in the sky. The lowest wand touches the river flowing through the landscape showing that perhaps it is only one idea that really moves us and we must go with that which appeals to us emotionally and intuitively. The wands fly through the air but what goes up must come down. Whilst enthusiasm is wonderful and inspiring, eventually we come down to earth with a bump and can only work with those ideas that are possible to manifest. If all eight wands landed in the same place and took root, eventually they would stunt each other’s growth. Again there is the sense that we must use some discrimination and weed out those ideas and projects that may choke others that have more potential.

Whether viewed through the lens of astrology or tarot, Mercury in Sagittarius brings us a sense of movement, a taste of inspiration and a longing for adventure. Oh and the wonderful enthusiasm of Tigger!