In part one of this series I looked at why an accurate birth time is necessary, what constitutes the time of birth and how to find out your time of birth.

In this post I am going to begin to explore what you can find out even if you don’t know your time of birth. Many people feel put off by the weighted emphasis on the time of birth and feel that without knowing it, they cannot explore their astrology at all. This isn’t the case. Whilst we do lose some important information and methods of prediction, there is still a great deal you can discover.

I am going to use the chart of Prince William’s bride-to-be Kate Middleton as an example because her time of birth is unknown.

The first thing to do is to cast two birth charts which cover the possible times you were born – an early chart from the earliest possible time you may have been born and a late chart for the latest time you may have been born. For example, if you have been told you were born “sometime between midday and 4pm” then you would create a chart for midday on your day of birth and a chart for 4pm. If you have no idea whether it was even day or night, then you would need to create a chart for midnight on the date of birth and another for midnight the following day so that you have the full 24 hours covered. The majority of people however do tend to have some idea whether it morning, afternoon or evening.

If you don’t have your own astrological software, you can create your charts for free at Astrodienst

As no one publicly knows whether Kate Middleton was born at night or in the day, I have cast a chart for midnight of the day of birth and midnight 24 hours later.

You can click on each of the thumbnails below to bring up a bigger image. 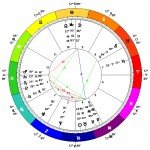 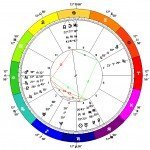 For the time being we will ignore the Ascendant and Midheaven because these are dependant on knowing the time of birth. All we are looking at right now is where the planets are positioned.

In the first early chart, the planets are in the following positions:-

In the second late chart the planets are in the following positions:-

All you need to do is compare the planetary positions between each chart, checking to see if the planets have changed sign or direction.

The Sun moves around one degree per day so it is very likely you will be able to discover your Sun sign. As we see with Kate Middleton, in both the early and late chart, the Sun is situated in Capricorn.

I am one of the few ‘unlucky’ ones born right on the cusp. Until aged about 18, I believed I was an Aries; afterall, the newspaper column stated that Aries ran to the 21st April and I was born on the 20th. My Grandmother even bought me a beautiful silver Aries pendant which I still have. It wasn’t until I saw an astrologer and gave my time of birth that I found out I am actually a Taurean. If, like me, you discover your Sun could be one of two signs then for time being, you will need to put that aside. What we are focusing on here is information you can find out from your chart.

The fastest moving object in the chart is the Moon. On average she travels 13 degrees per day. Due to the speed of her movement, it is quite possible that you will find that your Moon may have moved from one sign to another in your early and late chart. If this is the case, again this will have to be put aside to come back to later. That said, reducing the options from twelve to a possible two signs is still going to give you a clearer idea of your energetic make-up.

In Kate Middleton’s chart however we can see that the Moon is definitely in Cancer.

Mercury’s motion can vary. Sometimes he moves very quickly, occasionally moving faster than the Sun. At other times he slows right down as he moves towards his retrograde motion. It is important to note whether the direction of any of the planets has changed between your early and late charts.

Aside from planets turning retrograde or direct and changing signs, from Venus outwards you will find that the position changes so little that you will be able to know their placements. The further out in the solar system we move, the slower the planetary movement becomes.

So – what does this tell us so far about Kate?

Sun in Capricorn – Life purpose to achieve, to create a stable foundation, to reach the pinnacle, to climb the mountain, to feel worthy, to be a realist, to uphold tradition.

Moon in Cancer – emotionally very nurturing, may have a hard shell on the outside but soft inside, needs home comforts and emotional security, may find it difficult to break habits, emotionally shrewd, will defend those they see as family, has a long memory, may experience mood swings.

Mercury in Aquarius – Mentally agile, likes to think outside of the box, may experience flashes of intuition, enjoys debating, may be obstinate, likes to know a wide circle of people, occasionally may like to shock others through the things they say or the way they think.

Venus in Aquarius – a lover of the people, may dislike to be romantically tied down, values independence, may be detached when it comes to love, friendly to all, partners need to be a friend as well as a lover, needs intellectual rapport in a relationship.

Mars in Libra – Fights for justice, defends equal rights, works hard for peace, indecisive about action, passive aggressive, the ability to mediate and to compromise.

Jupiter in Scorpio – Has faith in dark times, a desire to explore and understand the unknown or taboo, uncompromising beliefs, a desire to accumulate power, good understanding of business and a flair for dealing with money, the joy of sex, searching for passion, possibly deeply religious or philosophical, the search for truth.

Uranus in Sagittarius – Intellectual freedom, the freedom to travel and explore the world, unusual dreams, revolutionary reformer of education.

Neptune in Sagittarius – wishing for a peaceful world, big dreams, sensitive to the beliefs of others, enjoys the refined company of those who have travelled the world.

Pluto in Libra – Born into a generation who will redefine relationships, change the course of justice, understand the power of diplomacy, enforce fairness.

North Node in Cancer – A karmic pull to family, creating a secure foundation, a need to shift from professional development to personal development, the movement towards being emotionally open and sensitive to the needs of others, a shift from ambition to the simplicity of family life, the need to be emotionally fulfilled.

Elemental and Modal Balance
As we know the signs that all Kate’s planets are placed, this means that we can also look at the elemental and modal balances in her chart.

The elemental and modal balance is worked out from the sign positions of the Sun, Moon, Mercury, Venus, Mars, Jupiter and Saturn. Normally you would use the Ascendant and MC as well but even with the information you have, you can start to get a picture of whether a certain element or mode is lacking or strong in a chart.

In Kate’s chart she has

Already we can see some interesting patterns above. Just by using the planets positions alone we can see that Kate has a strong airy nature but has no fire planets. We can also see that whilst she has strong cardinal and fixed qualities, mutable is missing. It is possible that her Ascendant or MC can help to make up for the missing fire/mutability but there is still a sense that this is someone who has an airy-watery nature who thrives on communication and making connections (strong air). She may be quite intuitive and feel that the world is generally a caring place but at times she may lack faith in herself. She may also find it difficult to display warmth and enthusiasm.

The cardinal strength in her chart gives her some self-starter motivation that would perhaps otherwise be lacking without fire but the motivation here tends to come from the mental rather than emotional plane. This lady knows what she thinks and what she wants but she may find it hard to shift her position if necessary (lack of mutability). That said, she may outwardly display otherwise in order to keep the peace as human relations are important to her.

Planetary Dignity
You can also look at the dignity of the planets in their sign positions. Planets are better placed in some signs than others. For Kate Middleton we can see that her Moon is very strong because it rules the sign Cancer, Mars is in detriment and doesn’t function well in Libra but Saturn is exalted in Libra. Note that when looking at the dignity of planets you only use the 7 traditional planets (the Sun through to Saturn).

So now we know that Kate is most likely to be strongly governed by her feelings (Moon) and may be drawn to build an empire through  relationships (Sun ruler Saturn in Libra). But Mars in Libra suggests that perhaps she compromises her desires in order to keep the peace.

So already we have gleaned quite a lot of useful information, and all from a chart without a time of birth.

In the next part I will look at the aspects in a time unknown chart, continuing to use Kate Middleton’s chart as an example.