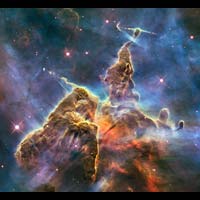 An eclipse of the Sun is a paradox. In darkness we see that which is usually hidden. What is normally invisible comes to light. Things that we take for granted show themselves to be important players in the cosmic round. Eclipses of the Sun take us back to the primal self, figures on the hillside trembling at unexpected darkness and the silence of the birds. Eclipses show us the perfect symmetry of our universe.

When I think of an eclipse, I think of invisible ink. It’s like watching a thriller where the detective is looking for clues and suddenly a UV light reveals messages scrawled from the victim across the wall. Eclipses show us something that was there all along but we haven’t seen before.

The Sun and Moon in the eclipse chart are conjunct asteroid Eros. Eros was the son of Aphrodite. He is the god of passionate love, equipped with arrows which he lets fly on unsuspecting humans, causing them to fall in love. Eros represents heady new love, when one is all-consumed by thoughts of the other. The blissful state of love that is the generator of the greatest stories, poems and songs. Love that is unbreakable, love beyond death.

Goddess Aphrodite was jealous of the human Psyche, whose beauty was worshipped far and wide. Aphrodite sent her son Eros to shoot Psyche with one of his magical arrows to cause her to fall in love with a vile creature. But Eros instead fell in love with Psyche. He would come to her in the dark to make love to her and Psyche was delighted with her new found husband.

But Psyche was forbidden to turn on the light so she never saw that her husband was handsome Eros. All was well for a time but then Psyche’s sisters, jealous of her new life, set the seeds of doubt in her mind. They suggested her lover was a horrible demon and insisted she must turn on the light and kill him. Eventually Psyche gave in and turned on the light, struck out at her lover and then saw who he really was. Injured and upset, Eros went away and Psyche was desolate.

Eventually, after many trials set by Aphrodite, Eros and Psyche were re-united and had a child called Pleasure.

So the eclipse chart raises the story of Eros and Psyche. Both the eclipse and the myth talk of bringing things to light, of seeing through the dark and knowing the truth. The eclipse in Capricorn and square Saturn suggests that we must deal with the reality, that we cannot remain blinded by our passions. They will be tested (Saturn) to see if the foundations are strong, to see if we can truly build upon them, to see if they are real. Both Capricorn and ruler Saturn are interested in what is lasting and enduring. Often the heady passion of the early days of love can fade to dismal disappointment or bleak reality. This eclipse is about seeing if what we love and pursue is actually worth our time and effort.

The eclipse sits on the Sabian symbol

The theme of longevity is again echoed in this symbol. The eclipse in Capricorn requests that we focus on the long-term and invest in the future.

Contained within the eclipse chart is the last conjunction of Jupiter and Uranus in this current cycle. The conjunction becomes exact less than an hour after the eclipse. Uranus is the awakener. Jupiter is the traditional ruler of Pisces and oversees the collective unconscious – the sea of dreams. Jupiter and Uranus conjunct is like suddenly being awakened from a deep sleep, the dream still vivid and now remembered consciously. Again there is the sense of a light being switched on in the dark. We can no longer remain enraptured by the magical world of dreams. It is not enough to dream, now we must make it reality.

Venus, Goddess of love, squares Neptune. Here is the fanciful delusion, the rose coloured spectacles, the glossing over all faults, the refusal to see the truth. Yet also here is the fight to love beyond all things, the challenge to look beyond the romance and move towards unconditional love. Venus creates a flowing trine to Uranus. She too, wants to wake up and shake off the dream of Neptune so that she can clearly see what is valuable.

But what does this all mean for us?

On a mundane level, this solar eclipse suggests we need to be looking to our future en masse and to build something that is worthwhile and meaningful. We need to shed the glamour of infatuation with that which is unreal and inconsequential, and look towards seeing the world with the piercing clarity of Uranus. Saturn will not let us dwell in the comfort of the dark. Eros cannot remain a secret forever.

Remember that Capricorn is symbolised by the goat who playfully leaps to the top of the mountain to be king of the castle. The goat-foot God is not devoid of passion, rather he is earthy, sexual and fertile; enjoying the fruits of his labours with gusty abandon.

In your own chart, look to which house the eclipse falls in for a clue to where you need to open your eyes and see the truth. The issues of this house need to be faced in order to invest in your own future.

For me personally, the eclipse takes place in the 6th house. Having been inundated with minor health problems last year, this eclipse is asking me to start concentrating on my health and my daily routines. Saturn in my third house shows I need to think realistically, face the practicalities. Whilst it may be difficult (Saturn square the eclipse), it isn’t impossible. I need to get an eye test, to face the fact I possibly have arthritis in my hip (oh the pleasures of getting older!) and start making some changes in my day to day life so I can work more effectively and look after myself better. I need to get clear on what I am dealing with, face the trials (of Psyche) so that I too can wave from the top of the mountain. I may stumble a few times on the way up what with this dodgy hip and all but it must be done. Eros is calling, and I want to see his true face.