The media has hit upon a story – Ophiuchus is the 13th constellation. You are not the sign you thought you were – cue shock horror! It’s an old story made new, repeatedly turning up like a bad penny every few years. The old argument raises its head like a snake about to strike – spitting at astrologers from all angles. And we  respond, protecting our knowledge, our understanding, our history. We curl poised, ready to strike back – point out that we understand  precession, that we practice Western astrology, that this has all be discussed before, 2000 years ago. The astronomers hit back, laughing at our ineptitude, ridiculing faith, belief and our academic studies. 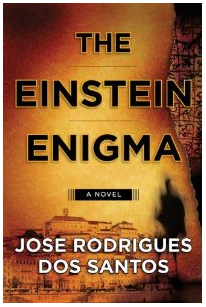 During this furore I have been reading the Einstein Enigma by José Rodrigues Dos Santos. José is an award winning journalist specialising in war reporting and a familiar face seen on Portuguese television.

I read it initially because of my fascination with Portugal but within a few pages discovered this novel was going to to take me deeper into my questions about life, the universe and everything.

Inevitably it gave me pause for thought, time to reflect upon why I practice astrology and the argument that rages between us and science.

The novel is both a espionage thriller and an exploration to find proof of God through science. If you think it can’t be done – read the novel! Ranging through philosophy, quantum physics, mathematics, history and religion, José weaves together what science has discovered with what religious texts across the world have stated for thousands of years. The resulting work is so profound I haven’t been able to stop thinking about it.

What stuck with me most is José’s description of reductionism and semantics, touched on below in his short video about the novel. In the book he points out that reductionism (science) explores the world of fact. The universe is composed of planets and stars, galaxies, black holes, dark matter. It is atoms and molecules and electromagnetic energy. It is weighed and measured, tested, photographed and re-created in a laboratory.

Imagine a song. Any song you love. You could study this song in many ways. You could measure the sound waves, look at pitch and the timbre of the vocals, you could quantify the resonance of the bass and so on. You could even look at the electrical conductors on the guitarist’s pick-up or explore why the microphone seems to bring out certain frequency ranges. But with all the scientific exploration of acoustics, it still wouldn’t help you understand the meaning of the song. Dissected, the song has no resonance on an emotional or spiritual level. The scientific study of the instruments used doesn’t tell you if this is a love song that means something to you.

And this brings me to astrology.

The Einstein Enigma finds unity between science and spirituality; essentially we are all trying to explain the same thing from different points of view. There is no separation, we are just two electrons dancing on opposite poles of the universe.

Astrology is like listening to the great song of the cosmos, we sense it, we see patterns. We hear a verse and a chorus and a refrain. Astrology is the semantic study of the universe. Certainly we borrow from astronomy and science and maths. We plot our charts using complex calculations. Sometimes planetary meaning is derived in part from the physical characteristics of a planet concerned (think Uranus spinning on his side!).

To me, the clue to the meaning of everything is hidden within the universe itself, encoded into every fibre of matter that exists. Astrology is just one way of attempting to understand the pattern, to make sense of something that is possibly too vast to grasp – or so simple that we refuse to see it?

It is interesting that Ophiuchus is the serpent-bearer and the 13th sign – both incorporating symbols which have been demonised in the last 2000 years. The serpent is temptation, the number 13 representative of evil. It is betrayal, it is death. And yet in many cultures the serpent is revered as an emblem of healing, fertility and wisdom. In the West, where the serpent is most maligned, we still see it used as a symbol for medicine in the rod of Asclepius, a lingering reminder of the high regard the serpent once had.

In the midst of this argument between astronomers and astrologers lies a fundamental truth – that we are all looking at the same thing but exploring it in different ways. We are simply trying to understand. The problem comes when we fight each other over our discoveries, when we seek to put each other down, when we betray each other. Of course I cannot help reacting when I read another ‘reason why astrology is rubbish’. My emotional self is wounded and irritated. And yet it goes deeper than that. It strikes at the heart of humanity itself.

The Einstein Enigma shows there is a possibility for science and spirituality to walk hand in hand. Astrologers and astronomers could join together, weave our collective bodies around a rod of understanding and bring about true unity and healing. Who knows, between us we could finally understand the mystery of the universe and its song. Perhaps the 13th sign is simply that – a sign that change is possible.

Afterall, we all come from the stars.

For an explanation of why there is no 13th sign as far as astrology is concerned, check out this excellent article by my colleague Wendy Guy over at Evolving Door Astrology