In the midst of the horrific events in Japan, another news story caught my eye. As Japan battles to prevent a nuclear disaster following the earthquake which was so powerful it shifted the axis of the earth, Britain is now considering whether to use a controversial fertility treatment that involves splitting the nucleus of a human  egg – an interesting parallel. On the large scale we have the issue of nuclear power and its inherent dangers. On the microscopic scale we have a similar analogy of splitting the most fundamental human biology – playing with the ‘power plant’ of an embryo. The theme is of creation and destruction, a Lilith story if ever there was  one.

This story isn’t new but it’s resurfacing a few hours before the earthquake is synchronistic. I couldn’t shake a sense that somehow they are connected so I decided to investigate further.

This new fertility treatment is called ‘ooplasmic transfer’. It has been designed to overcome the issue of inherited medical disorders being passed down through the  mother’s line.

Without getting too technical, basically the nucleus of an egg from a mother who is at risk of passing on an inherited disease is extracted. The nucleus of the egg doesn’t contain the mitochondrial DNA which carries disease. The donor mother’s egg is stripped of most of it’s DNA aside from the mitochondria. The nucleus of the original Mother’s egg is placed within the donor Mother’s protective shell. This combined embryo is then placed back in the original mother to come to term as normal.

The Lilith theme screams out at me.

In Genesis, there are two creation stories of woman:-
Chap 1. Verse 27: So God created man in his own image, in the image of God created he him;  male and female created he them.
Chap 2. Verse 22: And the rib, which the LORD God had taken from man, made he  a woman, and brought her unto the man.

Looking back at Jewish mythology, woman was formed once in the form of Lilith and then again in the form of Eve. From the (Christian) beginning, there is a suggestion of two mothers. Lilith of course refused to bow down to Adam’s authority, left the garden of Eden and ran off to procreate with demons. The children of Lilith were then destroyed by God for her refusal to return to the Garden. Out of vengeance, Lilith then vowed to kill the children of mankind.

These stories are corruptions, based on the ascent of patriarchy but their mythology lives on, archetypes play out.

So perhaps Lilith is the battery, the power plant that is feeding what is happening currently on a  wider level. In the March Cosmic Tides I noticed that there was a great deal of  activity around Lilith – her connection to the Aries point, conjunctions with Scheat, Uranus, Jupiter and Mars. Amazingly, the moment Uranus entered Aries, Lilith  (true) was on the Sabian symbol

“A Serpent Coiling Near A Man And A Woman”

It makes me think of how we have been tempted to pursue the knowledge of the Gods –  the power to create, the power to destroy. Both now rise up, hissing to get my attention. Uranus wakes us up to what we have invented.

This morning I read a fantastic article by Eric Francis entitled One Day in the Nuclear Age. In his article, Eric included the chart for “the first self-sustaining atomic reaction” which he named the Nuclear Axis chart. I felt compelled to compare the Nuclear Axis chart to the chart of the publication of an article heralding the ‘three parent’ fertility technique and it’s successful research in the UK. The article was published shortly before the New Moon in April 2010 and entitled  “Pronuclear transfer in human embryos to prevent transmission of mitochondrial DNA  disease“. I cast the chart at noon because I don’t know the exact time the article was published. I shall hereafter refer to this chart as the Pro Nuclear Chart (yes the title of the article is very symbolic!). 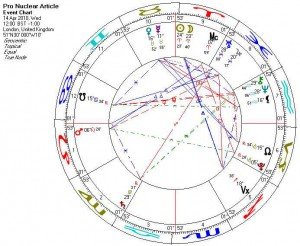 The Sabian for the upcoming New Moon in that chart was:-

How interesting considering I am comparing the macrocosm and microcosm of ‘nuclear’ power. 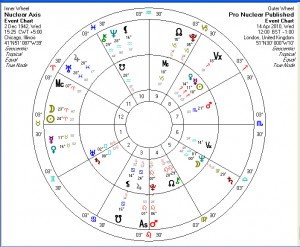 The connections between the two charts are quite astounding and no wonder that my intuition prompted me to compare the two. Firstly the Sun and Moon of the Pro Nuclear chart are hidden away in the Nuclear Axis 12th house. It is like man and woman are hidden from view as science takes over the process of creation. The presence of the lights in the house of self-undoing doesn’t escape my notice.

Pro Nuclear Mars is conjunct Nuclear Axis Pluto – the power of these two together certainly can be explosive. The Ascendant of the Pro Nuclear Chart is also conjunct Pluto of the Nuclear Axis. There is a sense of battling death by creating life. Note that the Sabian symbol for the Pro Nuclear Ascendant is “An Epidemic Of Mumps”. With Pluto in the 6th house along with the North node, there are powerful health considerations for the future at stake here.

Of course this is why the technology developed in the first place, to try to
overcome them. But Mother nature has a way of re-balancing and testing. If you look at the Pro Nuclear chart alone you’ll see Lilith in the 7th house (the house of open enemies) along with Chiron and Neptune. A seemingly magical healing which uses the creative power of Lilith is now out in the open. Don’t forget though that the 7th house is also the house of open enemies. Lilith’s presence here may be a warning.

Saturn in the Pro Nuclear chart is conjunct the Moon and Neptune in the 5th house of the Nuclear Axis chart. Just reading the three together made me think of making the dream (Neptune) of children (5th house and the Moon) a reality (Saturn). 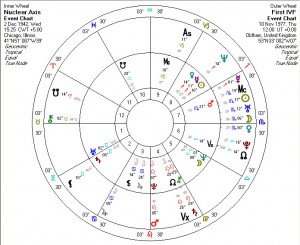 Lilith in the IVF chart is conjunct Saturn in the Nuclear Axis, her energy
restricted, delayed – having to submit to the rules of patriarchal authority. In the IVF chart, the lights are separated by Uranus, incredibly symbolic of the process of technology fertilising the child outside of the womb – man and woman divided.

The ‘three parent technique’ has already produced around 15 children in privately funded procedures. Whilst Britain waits for the go-ahead, science has already moved ahead.

I have Lilith conjunct my Sun (within 8 seconds of arc) and the two are square my moon. I cannot imagine what it is like to want to have children. Don’t get me wrong, the children in my life are most precious to me and I feel extraordinary blessed to know them – but I knew right from being a child myself that I never wanted to breed.

That said, I feel incredible compassion for couples who want to have children and can’t. It feels incredibly unfair that my healthy body has no desire to reproduce yet so many loving couples are unable. But I profess to a sense of disturbance at the new technologies becoming available, dabbling in nature, genetically modified children, designer children, Frankenstein’s children. There are overtones bigger than we can possibly imagine. Just as our discovery of nuclear power changed the face of the planet, so might the discovery of splitting the nucleus. As we dabble with the power plant of embryonic cells, the technology might just blow up in our faces.

When I look at the Pro Nuclear chart (and the name are the article itself is highly relevant!), I see how the potential is there to cure disease with Pluto and the Node in the 6th house. I am not anti-science and who am I to look into the eyes of a woman who wants to have a child and tell her she can’t.

But Lilith in the house of open enemies in the Pro Nuclear chart and her connection to the South Node of the Nuclear Axis chart disturbs me. Because Lilith has a way of taking revenge when we take from her what is natural. Lilith is not the anti-mother – we created that through our fall from matriarchy and mother earth. Lilith is the battery, the life force: passionately producing life in whatever way she can. Try to force her into submission, strip her of what is rightfully hers and she’ll rise up and create hell.

Lilith lies alongside Jupiter in the 3rd house of the Nuclear Axis chart. On the one hand she leads me to think of that old saying “A little knowledge is a dangerous thing”. Yet on the other hand she may be there to say, I can teach you everything I know. Love your neighbour, she may be an angel in disguise.

One Day in the Nuclear Age

New fertility technique to be assessed by regulator