The design of this blog is based on the Portuguese discoveries: the brave maritime explorations that took place during the 14th and 15th centuries and resulted in the discovery of Africa, Asia and Brazil. It established trade routes that made Portugal prosperous and powerful through obtaining sought after items such as Indian spices.  The logo you see above is a 14th Century Portuguese compass rose.

So when I saw a brief news story about a man who had decided to sale
single-handed from America to Portugal in a little boat called ‘Cuddy’ I knew I had to take a closer look.

Greg Frucci is an architect turned actor and film maker and has just passed his 50th birthday. He fell in love with Lisbon on a business trip some time ago. Upon his return to the states, a chance conversation sparked the idea that Greg should sail his little boat to Portugal. Provided the weather is right, Greg sets sail tomorrow under the light of a full Moon. His journey will be done in three legs as he first crosses to Bermuda then to the Açores then on to Lisbon. This is a dangerous journey and one will tax him physically and mentally. With cameras set up on the boat, the entire trip will be filmed and made into a feature to be released next year.

The overall premise of the movie is “an inspiring film about a 50 year old man’s quest for peace within himself and the world he lives in.”

Neptune rules the ocean, sailing, acting, film, photography and peace. Already we can see how Greg is embodying the Neptunian cosmic tide. If you check out his website, you’ll notice that he includes poetry – another domain of Neptune. The whole project is entitled “Changing Course” and will include philosophical ponderings upon life: Jupiter themes (Jupiter co-rules Pisces with Neptune).

“The Material continues to drift away…” says Greg in his latest post. Neptune seems to speak through him.

Greg kindly provided me with his birth details so that I could explore the
astrological connections to this inspirational challenge which has really captured my heart. I have included his chart below (click to enlarge). 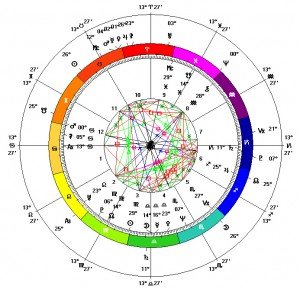 With the Sun on the IC, it is as though Greg is lit up from within. On his website he speaks fondly of the influence his father had upon him and how he introduced Greg to sailing. The Sabian symbol for his MC  is

“A Majestic Rock Formation  Resembling A Face Is Idealized By A Boy Who Takes It As His Ideal Of Greatness, And As He Grows Up, Begins To Look Like It.”

His father was in the Marine Corps.

Notice too that the MC is in the final degree of Pisces in the 9th – we could say that Greg is drawn towards a spiritual journey across the ocean! The MC is strengthened by ruler Jupiter in its own sign. Jupiter of course rules long journeys, Sagittarius is needing to expand the mind. In the 6th house, this journey is about connecting mind, body and spirit, possibly about bringing the spiritual into daily life.

Neptune by transit is due to make a last pass to Chiron in the 8th house. This has the potential to be a deeply healing journey.

The progressed Moon will make a conjunction to Uranus as Greg begins his voyage –  perhaps representing the emotional isolation of such a journey but also the enormous sense of freedom and space. As the progressed Moon has eased towards this point, Greg has sold and given away most of his possessions both to fund the journey and also to let go of the past.

By transit, Uranus the Awakener has recently passed over the MC and opposed his Sun-IC conjunction. Here is another indicator that absolute freedom is necessary for him to discover his life’s purpose.

The voyage is set to begin under a lovely Jupiter trine Jupiter. The Aries stellium adds heat to the idea – he’s all fired up and ready to go!. The transiting North Node is still conjunct natal Jupiter acting as a pointer to long distance travel. This adventure has a karmic feel. With the natal South Node in Pisces it is as though there is already a powerful connection to the ocean, spirituality and the collective unconcious.  During this voyage he may discover parts of himself that had been forgotten.

By progression, Greg’s Mercury is retrograde and will make a conjunction to progressed Neptune next year – right around the time he hopes the film will be released. As the conjunction takes place in Scorpio in his natal 4th house, we can anticipate this film to explore such themes as the concept of ones home and roots, uncovering the truth of oneself, seeing beyond the veil and psychological enquiry. One could say that it will be a deep (Scorpio) message (Mercury) of peace (Neptune).

During this year Saturn by transit will conjunct his natal moon in the 4th perhaps giving him the opportunity to set down roots.

I know when I first read about this voyage it triggered in me saudade – the Portuguese word that beautifully expresses the concept of yearning, longing, missing, nostalgia and hope all rolled into one. All Neptunian words. For Greg too this is about finding a sense of place, perhaps somewhere to call home. He said of Lisbon,

“While in Lisbon, Portugal, a feeling of calm surrounded my soul supported by what  is real” – a lovely manifestation of Neptune in the 4th combined with Saturn on the  Descendent.

This project touches my heart in a way I find difficult to express but it so wonderfully captures the energy of Neptune in Pisces I wanted to share it with you. In fact it doesn’t just touch my heart, it touches my soul – alma in Portuguese.

Here is a man who is utterly willing to let go of everything to follow a vision, who trusts the tide, who is venturing into the great unconscious with heart and mind open. It is not without its dangers and this too he is willing to face in order to find peace within and without. “Changing Course” may speak to all of us on a collective level.  Please do watch the video and listen to the backing song he chooses 🙂

Boa Viagem [have a good trip] Greg. May the stars light your way.