Home Astrology and World Events The Astrology of the Manchester Riots

I’ve just been watching a program about honey ants in the Arizona Desert. As I watch them work together for the benefit of all, I find myself wondering why a nest of ants can do so easily what we as humans find so hard.

I posted the cosmic tides for August on August 1st. I wrote:

Between the 9th – 13th August we seem to enter a cosmic stormy period as Mars in Cancer goes on a slow boil. It begins innocently enough with a trine to Chiron. Sometimes you must fight for those who cannot defend themselves. Later however, Mars moves into a simmering square with Uranus. This is a challenging aspect and patience may be severely tested. With Mars in Cancer, there’s a sense of being backed into a corner defending what’s yours with all your might. Security issues may come into the foreground during this time, boundary lines may feel like they are being torn away. When Mars and Uranus square, rules can create tensions, especially those that feel out of date. If you feel frustrated, the best way to use this energy is to look to where you feel held back. Find ways to gain new freedom but endeavour to do it without causing disruption to others.

Only today have I noticed that the square between Mars and Uranus perfected at 5.33pm yesterday. The first coordinated strike of violence in Manchester hit at 5.30pm.

My mind is spinning. I have a part time day job in the city centre of Manchester; one that leaves me time to write and practice astrology. I live within walking distance.

Yesterday afternoon I left work early as a friend was coming for dinner and I needed to shop for food. Outside the office I can only describe the air as ‘malevolent’. At this point there were only rumours, no police, a few ‘undesirables’ on the streets. There was nothing to suggest what was coming but many of us (psychic or not) could feel it.

I walked home uneasy. My friend was delayed as he left his workplace in Salford. The riots by then were in full swing. When he did arrive, we could only stare at the television and then at Youtube footage in shocked silence; watching as 100 youths trashed the street I work on. We listened to the constant wail of sirens and the buzz of the police helicopters endlessly circling above. I worried about opening the office early in the morning. I wondered if we would have doors to open!

I hate that I feel flashes of anger, despair and yes even violence towards
those who have committed these crimes. I hate that I can’t just simply reach out to them and make them understand. I hate that their eyes are dull, like the essential spark has been put out; or that sometimes you can see the ‘feral’ gleam that reminds me of a fox contemplating a hen.

But I let the feelings come because I need to work through them, need to allow myself to feel the shock and the outrage in order to become clear again. In between these tidal waves of feeling come soothing rains – the sight of Sikhs protecting their temples, the people who volunteered to clean the streets.

Racked with these feelings, I turned to what I know and understand – astrology. 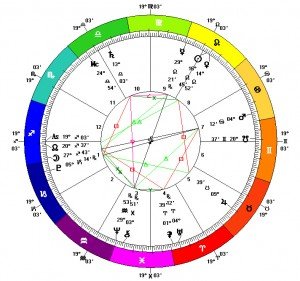 Looking at the chart cast for 5.30pm yesterday we can see clearly that Mars is already in position, squared up to Uranus and within one degree of an opposition to Pluto. Mars is in its fall in Cancer. The government has granted the use of water canons if necessary to defend against unruly crowds. The symbolism is not lost on me!

Pluto and Mars are in opposition across the 1st-7th axis speaking of a deep violent rage, forced change and issues of power and control. The Moon [the people] is widely conjunct Pluto – we are at war with ourselves. This is a watershed moment for the public on mass. A moment of transformation. A moment of destruction. I instantly noted the ominous transiting node conjunct the Asc-Desc axis which I have always found to denote a feeling of ‘life or death’.

Mars sits of the Sabian

At A Railroad Crossing, An Automobile is Wrecked By A Train

Straight away we see that someone hasn’t followed the signs. With this Sabian we don’t know if the ‘stop’ sign has stopped working or if the driver of the car is out of control. Either way there is a sense of danger, a clash of things coming from different directions, a failure to heed warnings that result in catastrophe. Mars traditionally in the 7th can indicate conflict with others.

I notice Mercury retrograde on an anaretic degree. The Sabian is ‘an unsealed letter‘. There is a hidden message at play. Opposite Mercury is Neptune in the 3rd house. Communications are distorted, lies are told, we cannot rely on the media. Neptune and Chiron in the 3rd can indicate a breakdown, a dissolution of communication resulting in wounds. Read another way it could be said that wounds are being communicated in an underhand way. The sextile to Pluto however may suggest that despite the negativity, some opportunity for positive change may come.

Black Moon Lilith whispers in the ear of Uranus in the 4th house. This is the house of our land, our home. Square Mars and the Moon, Lilith’s resentment erupts, throws us into chaos. She sits on the Sabian “A Comedian Reveals Human Nature“. There is little to laugh about yet topical jokes have been flying in the past few days. We laugh else we would cry. We laugh to relieve the tension. We laugh because we recognise some truth in what is being said and sometimes truth is hard to face. The situation is anything but comical yet the black humour of Lilith appeals to the darkness within the perpetrators. She perhaps reaches them in ways the light can’t.

The Nodes across the Sagittarius-Gemini axis suggest that this is about exploring what we believe and what we say. In one way the Sagittarius Ascendant may have exacerbated the exuberance of those who rampaged, ‘bigging them up’. Jupiter in the 5th as ruler exaggerates ‘play’ and can sometimes indicate taking a gamble. Jupiter in Taurus can sometimes manifest as simple greed.

The Sun is conjunct Venus in Leo in the 8th house of the chart, square Jupiter. The wealth of others, debt, money, who owns what and how – all these issues are highlighted. The Sun’s placements and connections suggest ‘every man for himself’, ego-trips abound. There is no denying that these riots are based on greed, the opportunity to have something, to snatch and stash. But yet there are pointed arguments raised about bankers who given themselves huge bonuses and politicians who claim vast expenses, the constant mishandling of the public’s money. These and a myriad of other stories speak of an insidious corruption that sneaks through the halls of power. Whilst I think few of these youngsters would cite these as reasons, they are reasons nonetheless.

There are reasons behind what happened. They are NOT excuses. The utter failure of our economic system is not an excuse to hurt another to violate a business or put terror in people’s hearts. But it perhaps goes some way to explain why this is happening. Our society is intrinsically based on the haves and the have-nots. Our political structures are divisive instead of unifying. The growing financial pressures upon us are enormous. We live everyday surrounded by what we are supposed to have and tempting images of what we should strive for. Our creativity and freedom is crushed either by lack of time, lack of money or both. These issues boil beneath the surface of the typical British ‘stiff upper lip’.

Most likely we will never get straight answers from those who committed these crimes. But we only need to look at the state of our society as a whole to understand. The North Node conjunct the Ascendant in Sagittarius suggests to me that we must look clearly at what we believe in. We MUST seek to understand and find meaning in all this. We need to educate ourselves.

In order to make it through this, in order to make sense of it all, we must begin to see the bigger picture. We must seek the truth. Mars, Uranus and Pluto have gathered together to show us where as a society we have missed the warning signs. Now we must pick up the pieces.

Wishing peace to my country – and to all.