Home Astrology and World Events The Chart of Portugal – Revolutions

Portugal has taken an economic battering recently and they aren’t out of the woods yet but the country has an rich and illustrious history. As one of the oldest nations of Europe, Portugal once enjoyed great prosperity and political power during the Age of Discovery. Whilst there is beautiful architecture, there is nothing ostentatious about this country. There is a quiet humility within its people as well as pride for their land, culture and language.

The chart of Portugal is in itself a complex issue. Allow me to point you in the direction of a fantastic article by Helena Avelar and Luís Ribeiro “Searching for the Horoscope of Portugal” for further explanation.

For the purposes of this post, I have used the Revolution of 1974 chart. Known as the Carnation Revolution, this peaceful military coup marked the country’s change from being ruled by dictatorship to democracy. The timing of the chart comes from the moment a song called Grândola Vila Morena was played on the radio. This banned revolutionary song, marked the beginning of the coup.

The 4th house cusp is Pisces with ruler Neptune in the 12th. This to me captures the spirit of the Portuguese people, moved by music which speaks to their soul. It also evokes the concept of peace.

The Sagittarius Ascendant is perhaps reminiscent of Portugal’s Discoveries – the period of time when Vasco de Gama set sail across the ocean to India thereby establishing trade links with Asia. One of Portugal’s most famous monuments commemorates this.

During this year there has been great unrest in Portugal due to the austerity measures set in place to offset the country’s debt problems. In March, around a quarter of a million young people took to the streets to make their feelings known about the lack of jobs. True to their past, music was inspiration for the people through a song by Deolinda and another by Homens da Luta who went on to represent Portugal in the Eurovision Song Contest.

Meanwhile the Portuguese Prime Minister José Sócrates made a shock resignation after parliament rejected his proposed austerity measures to save Portugal from a bailout. He remained in office as caretaker until June 21st 2011.

Friends living in Portugal say times are hard, food and utilities are rising in price and property prices are falling. Young people are moving abroad to find work. But being sent Google News Alerts everyday, I also notice positive stories that don’t always make our British news. Nothing is black and white. Portugal tourism is up with record numbers visiting this year. 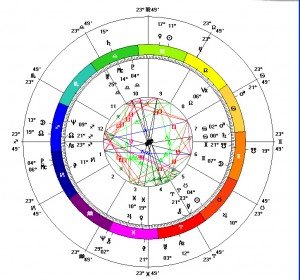 Casting the chart for Portugal I immediately noticed that the transiting North Node had recently made a conjunction to Ascendant. Whenever I see this aspect, whether in the chart of individual, event or country, I know something massively important is going on. The Nodes tend to pull you onto the path so to speak. The energy is very protective but also very strong. Sometimes it can show up as life or death situations.

The exact conjunction of the transiting North Node to the natal Ascendant occurred on June 10th. The Portuguese elections were held on the 5th June and José Sócrates left office on the 21st. The North Node marks evolution and development. There’s a feeling that fate has a hand in the proceedings. On the 16th July, Portugal had its nodal return, further emphasising that this is a period of development despite outwardly being a time of trial.

Meanwhile, Saturn, ruler of austerity has been transiting Pluto in the natal 10th house and then the MC. The 10th house signifies the government, the MC, the country’s reputation.

The rumblings of unrest began in January 2010  when a leading Portuguese newspaper criticised the government for over-spending. At this point
Saturn stationed retrograde on Pluto (just a few minutes from an exact conjunction).

Rob Hand’s Planets in Transit is geared towards the individual’s experience of astrological transits but his interpretation of Saturn conjunct Pluto is eerily reminiscent of Portugal’s economic climate.

“On a material level, this transit often causes financial problems or other kinds of shortages. Sometimes government or other officials will impose heavy burdens that greatly restrict your freedom of movement”

This aspect perfected on the 6th September 2010, just a few days after a huge long running sexual abuse case against children was brought to a close and those convicted, jailed. It involved a former ambassador and TV presenter. The authorities (Saturn), brought justice (Libra) for those who were sexually abused (Pluto).

Saturn marched forwards then to conjunct the MC on the 1st December, marking an announcement of the “worst December in history in terms of tourism“

The second Saturn-MC hit occurred on the 25th March 2011 – remember the protests against cuts mentioned above?

The last hit happened on the 26th August 2011. Now I see headlines talking about recovery.

Saturn is currently moving towards Uranus. The battle between freedom and restrictions, may be a furious one. Portugal may need to be patient during this transit, embrace constructive change that happens over a course of time.

But patience may be a challenge with Uranus squaring Mars in the 7th from the 4th house. There is palpable unrest. By progression, Mars is just about to form a square to Uranus reinforcing a rather explosive energy.

It’s interesting that the Finance Minister picked 2013 as a date for recovery. After Saturn’s opposition to the Sun (representing head’s of state and government), there come a raft of supportive aspects throughout the entire year which suggest promising growth provided resources are carefully used. Whilst Saturn opposite the Sun might indicate further government heads will roll, these positive transits seem to indicate a trend towards stability. Saturn trine Jupiter, Jupiter conjunct Saturn, Pluto sextile Jupiter, Jupiter sextile Sun – these are just some of them. The only niggle I feel is Jupiter opposite Neptune and square Venus which can manifest as over-confidence brought on by an unrealistic visions of the future.

I don’t live in Portugal so I cannot comment on whether the austerity measures are good or bad in the long term. Neither do I have much political knowledge. I cannot comment on the faults and virtues of the chosen leaders. I don’t feel it’s my place to do so. Underneath it all, I feel there is enough money in the world for everyone and it is only our current economic set-up that keep the rich-poor divide.

But the astrology is fascinating and regardless of political agenda suggests that Portugal will recover from this devastating economic crisis.

As an outsider, I recognise that I look at Portugal through a lover’s eyes. Mention Portugal to me and I think of the special light in Lisbon, a beautiful language, people I love, music and poetry – coffee by the river Tejo. There are of course imperfections and I cannot dismiss the real hardship that many people are experiencing. But like any great love relationship, I shall be there in sickness and in health. Força Portugal! Be strong. The starry wheel turns, the planets revolve and restoration will come.