ASTRONOMY
Asteroid Iris was discovered by English astronomer J.R Hind on August 13th 1847. She was the 7th asteroid to be discovered. Iris is the fourth brightest object in the asteroid belt after Vesta, Ceres and Pallas (Wikipedia). Her orbit is 3.68 years and her designated symbol is a semi-circle (rainbow) with an interior star.

MYTHOLOGY
In mythology, Iris is sometimes seen as the Goddess of the rainbow and at other times she is referred to as a personification of the rainbow. Either way, her connection to the glorious arch of heaven is her most prevailing myth.

Born of Thaumus (God of the Wonders of the Sea) and the air nymph Electra, Iris is comfortable in both elements. Her sisters were the Harpies, the evil storm spirits who tormented poor blind King Phineus. Loving Iris however struck a deal with the Argonauts who were pursuing the Harpies ensuring that Phineus would be tormented no more in exchange for letting her sisters live.

Iris is often depicted carrying a caduceus (like Mercury). The caduceus is an instrument connected to the bringing together of opposites and equilibrium – essentially a form of healing. Upon her feet she wears winged sandals and great golden wings carry her through the air. Iris carries a ewer of water which she uses to either water the clouds (to bring rain) or to carry water from the river Styx.

Zeus bade Iris to bring water from the River Styx to the court of the Gods. Each God had to swear an oath over the water to tell the truth. If they lied, the water would put them to sleep. In this way then, Iris is also connected to the concept of truth.

Iris can travel the length and breadth of the Earth at blinding speed and, perhaps due to her heritage, moves between air and water effortlessly. With her speed and skill, she is an ideal messenger Goddess, carrying messages from God to God and heaven to humankind. A rainbow shows the path she takes from heaven to Earth. As a divine messenger, her purpose is to unite – even the etymology of her name refers back to the words for ‘I join’.

The rainbow is an enduring symbol. Most identify it as connected to the concept of peace and hope. This comes from the Biblical story of Noah when after the flood, God sent a rainbow as proof of his promise that he would not deluge the Earth again.

In folklore we associate a rainbow with a pot of gold which lies at the mysterious rainbow’s end. I remember as a child running down to the bottom of the field near our house one day when I saw the end of a rainbow, convinced I would find the pot of gold! Of course I couldn’t understand how the end of the rainbow suddenly seemed to move any time I got near it! To chase rainbows means that you are following an unrealistic dream that can never materialise. You can see this vividly represented in the traditional Rider Waite tarot card, the 7 of Cups.

So essentially Iris is connected to the concepts of peace, hope, truth and unity.

Asteroid Iris was the seventh asteroid to be discovered – hence her number. We talk of the seven colours of the rainbow, the seven chakras (each corresponding to a different colour). We have the seven days of the week, the seven traditional planets, the seven sisters, the seven seas, the seven wonders of the world and not to mention the seven deadly sins! Number 7 is considered the luckiest number and there is endless discussion about its significance in the Bible code. There is a sense that it is in some way a primal number with spiritual significance.

ASTROLOGY
Where Iris sits in the birth chart shows where you must retain hope, where you need to be truthful and where you search for unity and healing. She also warns where you are inclined to fool yourself.

Whilst researching asteroid Iris on the net, I discovered the first reference to her in the Monthly Notices of the Royal Astronomical Society. Whilst her true discovery chart would be taken from the 13th August 1847, I was also curious to see the chart of what I call the ‘first reference’ listed in the monthly notices.

Casting the chart for the time given 9.02am Greenwich 14th August 1847, the chart offers some quite fascinating connections to Iris. 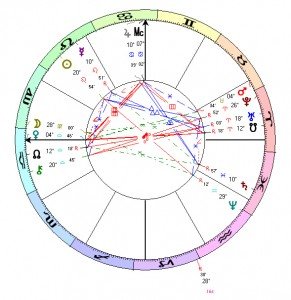 Firstly Iris is found at 28 Capricorn suggesting the manifestation of hope. The Ascendant Sabian is “A Man Watches His Ideals Taking A Concrete Form Before His Inner Vision“.

Iris sits on the Sabian “A Woman Reading Tea Leaves” which alludes to her magical connection; one who knows the will of the Gods.

Most fascinating is that the North Node lays on “Children Blowing Soap Bubbles”.  Remember the pretty iridescent rainbow colours in soap bubbles? These of course, however beautiful, will *POP* at some point, much like the disappearing rainbow and pot of gold. The theme is reiterated in the Sun in Leo in the 11th house opposite Neptune which warns against confusing illusions with true dreams from the heart. Find the gold within. Perhaps this opposition also alludes to the some references in literature that Iris was the wife of Morpheus – God of Dreams.

Jupiter conjunct the MC in the 10th connects to the concept of truth (traditional ruler of the courts of Justice). As the great benefic, the appearance of a rainbow shows that after the storm, peace reins.

Libra rising reiterates truth, fairness and the idea of unity/balance conjunct Venus shyly sitting with the Moon in the 12th house. We are only allowed to glimpse the true beauty of Iris. Sometimes we have to sacrifice what we feel for the greater good. We must remember beauty is within.

Saturn, ruler of Iris, sits in the 6th house of service trine Jupiter, reminding
us that Iris is in service to the Gods. In Pisces, hers is a spiritual duty.

I have a very deep and personal connection to the rainbow Goddess which began almost seven years ago. Rainbows kept appearing to me left right and centre, people talking about them, seeing the real thing, cards being given to me, children giving me rainbow toys. Everywhere was rainbows. It related to the most beautiful time of my life which eventually faded leaving only hope in my heart. Looking back at my own chart, I discovered that I was experiencing an Iris return. At the following return, not only did my dreams replay the previous experience but on the exact day of  the return I also dreamed of drawing with brilliant coloured pencils. To this day,
rainbows symbolise that time of my life and the person concerned and the universe will show me them when I need to remember that hope must always live in the heart.

Iris reminds us that we cannot truly exist without hope, nor without truth. It is a  fine line we walk between the two – between illusion and reality, between truth and lies.

If you are interested in knowing more about Iris, Marina over at Darkstar Astrology has also recently written an excellent post about her which includes an analysis of the discovery chart.