Home Tarot Ghost in the Deck – Spirit Communication through the Tarot

I remember my grandmother told me a tale. During the beginning of the war, Grandad was cycling home from work, very late at night. It was blackout and living in the countryside, the roads were pitch black. Up ahead was a crossroads. Normally he would have crossed straight over taking the quickest route home but as he approached, he saw something.

In the middle of the road was a man. He stood with one hand raised pointing to the other road; the long way home. The man stared intently at him but said nothing. Grandad was disturbed enough by the encounter to quickly change direction and take the long way home.

The next morning, on the front page of the local newspaper was the man Grandad had seen. He had died in an accident – two hours before Grandad saw him. He had been riding a bike too.

Ghost stories were rife in my family when I was young. My Father read Paranormal Magazine and Stephen King stories and had a few tales of his own to tell. But whenever I talked of seeing or hearing things from the other side, he would pronounce it all a load of rubbish. I guess he didn’t like his daughter knowing things she shouldn’t! My Mother also agreed it was rubbish but then would switch to how she was afraid of ghosts and the tarot was evil. I never did reconcile that argument. After my Grandmother died, I found out that she had spoken to Grandad on many occasions as he’d appeared to her regularly. I knew Nana saw things. She talked of it, often in uncomfortable tones, knowing of things to come – even her own passing.

After my Mother died, I felt Grandad come for her spirit. At her funeral she left a waft of her perfume in the room. By then, all the family knew I was into ‘that spooky stuff’ and chose to leave not long after my Mother’s visit. Too close for comfort I guess.

I remember glasses leaping up in the air at my paternal grandmother’s house, just before news that her sister had died. Everyone screamed. I remember travelling on a train back to my parents after a visit to London and a white owl smashing into the window beside me. When I got home, I was informed my great-aunt had died.

When I was little I saw them but as I grew older my sight shifted to clairaudience but every now and then I see them, mostly as light moving where light shouldn’t be.

Communication tends to come through words that seem to be pressed into my ear, or in pictures in my mind. But the tarot has become a primary means to communication.

It was probably my natural inclination towards mediumship that meant my cards soon found a way to tell me when spirit had a message. When I was thrown into the deep end on a psychic line 20 odd years ago, I was using the Arthurian deck by Caitlin and John Matthews. It was the Judgement Card that first jumped out at me. 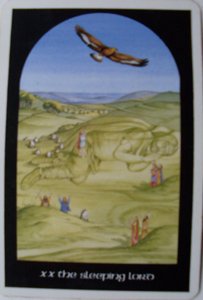 As you can see, the picture shows King Arthur sleeping. The story goes that The Once and Future King will one day be resurrected and return when England needs him. This card naturally seemed to show a connection to the concept of life after death.  Now in any pack I use, Judgement will always come up to show connection to spirit. It’s easy to see this in the traditional Rider Waite pack as well with the bodies arising from their graves and also in the Mythic Tarot. Some packs are not quite so literal.

Sometimes when a client comes for a reading, someone from the other side has already been trying to get their attention. Often when Judgement turns up in the spread, the client has had the feeling that someone has been watching over their shoulder so to speak. They may have seen or smelt something unusual, heard their name called or felt someone in the room when they were alone. They may have found an item belonging to the deceased person in an unusual place or for some reason the name of the deceased seems to be all around them – playing out through synchronicity.

Like any other information of a sensitive nature, it is important to broach the subject of spirit communication gently with the client – especially if they have been recently bereaved.

I’ve noticed some little variations to the message with card combinations which you may perhaps find useful.

Judgement + Ace of Wands. Direct communication which normally involves physically seeing, hearing or sensing the deceased. This may have occurred to the client recently or (if you also practice mediumship), the spirit may come through if you open up).

Judgement + 8 of Wands – There is a message from a spirit within the cards. This tends to be more subtle. It’s as though the message has been passed through the ether and is currently just waiting to be delivered. Most often I don’t see or sense the spirit in question. It’s just about the message.

Judgement + Ace of Wands + 9 of Swords – Nightmares or bad dreams about someone who is deceased. This may or may not include spirit communication through the dream.

Judgement + Ace of Wands + Devil – A haunting. The Devil in this instance tends to signify a presence that doesn’t have a good feeling. It doesn’t necessarily mean the spirit is ‘bad’ but the people who witness it are frightened by it.

Judgement + 10 of Cups – A house haunted by a spirit, but usually a friendly Casper – a resident ghost. I saw this combination once when a client was considering moving to a house but suspected it was haunted. For me by the way, the 10 of cups usually comes up to indicate the concept of ‘home’ as well as other more traditional meanings.

Judgement + 9 of Pentacles – The spirit of a pet. This comes originally from my Arthurian Tarot showing a circle of animals on Stone 9. The 9 of Pentacles is also however connected to the sign Virgo and the 6th house in astrology which is traditionally associated with small animals. You may find a different card shows up depending on the imagery of your deck.

If during a reading a question comes up about a deceased person but Judgement hasn’t shown up in the spread, I will first go through the remaining pile of cards to see which cards surround Judgement. These may indicate an answer to the query. Alternatively, if nothing comes from that, I place the Judgement card as a significator and ask for more information.

Do you have a card that symbolises a ghost in your deck?