There are some rather startling correlations to the current financial climate in this month’s Full Moon.

The Full Moon is conjunct fixed star Rucha and opposite asteroid Europa. The lights do not make any other planetary aspects and therefore seems to emphasise the star and asteroid connections. Fixed star Rucha is found in the constellation Cassiopeia. Rucha derives from an Arabic word meaning ‘the knee’.

Now Cassiopeia was a bit of a minx and declared herself more beautiful than the Nereids (sea Goddesses). Her vanity and arrogance were her downfall as Poseidon promptly strapped her into a chair and cast her into the sky where half of the time she is positioned upside down to teach her a lesson.

The constellation of Cassiopeia in general (according to Ptololmy) ‘is said to  give haughtiness, boastfulness and exaggerated pride‘. Rucha to me reminds that every now and then one must bend to someone else. The knee is connected to humility on a symbolic level. Ptolemy also said that Cassiopeia has the nature of Venus and Saturn which catches my eye as rulers of money (Venus) and austerity (Saturn).

So the Full Moon is connected to the concept of pride coming before a fall and the need to perhaps go on one’s bended knee before someone else. Perhaps begging for mercy or in modern terms, cash!

The Moon is also opposite Europa where she is conjunct the Sun. Whilst there is more to Europa than just her name, right now it is her name that screams across the media – the financial crisis in Europe with the Euro. Both words are taken from her name.

The Moon sits of the Sabian symbol

“A New Continent Rising Out Of The Ocean”

Good grief! Could we have anything more symbolic? What is happening now in Europe could literally change the face of this continent. Will Greece leave the Euro? Will the Euro collapse entirely? Who knows? But Mother earth seems to echo the story told in the heavens. When I listen to the news talking of trillions of pounds, the economists babbling and the politicians snaking through every question it does become ‘all Greek to me’. They are speaking a language I don’t understand because none of it makes any sense. Someone hit a button and reset all that debt to zero. This money doesn’t actually exist.

Venus, ruler of the Full Moon is conjunct Mercury in Sagittarius. There’s big talk happening in the world. Everyone has a different vision of the future. The movement (Mercury) of money (Venus) between countries (Sagittarius) is being pulled into line with the cosmic pattern (the North Node). It’s time to think global.

Meanwhile a grand trine between Mars, Pluto and Jupiter indicates vast quantities of wealth on the move. It’s also all about power and maintaining ones defences. But Mars is opposite Neptune. It’s all a smoke screen. There’s so much waste, so much being lost and with Neptune in play, deception is also a factor.  Don’t forget that Mars rules the Sun conjunct Europa. This isn’t about ONE country. It’s about Europe as whole. 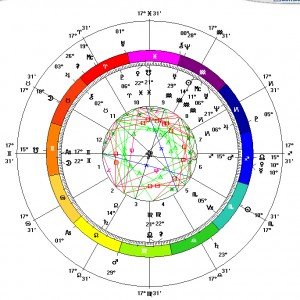 I had a little look at the chart of the introduction of the Euro. The Full Moon in the 8th house highlights the crisis connected to debt – an 8th house issue.

At the moment of the Full Moon, the transiting North Node is exactly conjunct the Greek natal Mars conjunct the Greek Descendant. The Greek Prime Minister certainly put the cat amongst the pigeons last week and now the consequences of that spontaneous action (Mars in Sagittarius) are perhaps about to be made known. Note too the transiting nodal axis across the Ascendant – Descendant, signifying a ‘life or death’ feel to the country’s current affairs. 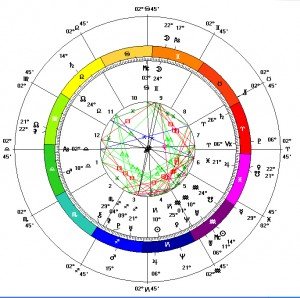 Comparing the chart of Greece to the Euro chart I note the rather striking conjunction between the Pluto of Greece to the Euro’s Vertex – as if Greece has a fated part to play in the transformation (or even end) of the Euro. I also notice the Greek Venus-south node conjunction conjunct the Euro’s Jupiter. Perhaps Greece will need to leave the Euro in order for the Euro to grow. There’s a karmic element at play. Another way of looking at this however is that perhaps Greece will serve to highlight the mistakes, the old patterns of every country that have prevented the Euro’s true growth and an economic cohesion in Europe.  Perhaps (like Chiron in the 8th) Greece will become a debt scapegoat. I also notice (not shown here) that in the Euro chart, the progressed Moon will be conjunct progressed Pluto indicating death/change/transformation at the Full Moon.

The Full Moon sits in Greece’s 12th house, The focus is on change behind the scenes. What is happening now affects the deep past collective memory of the people. The Sun sits in the 6th house highlighting how decisions made now will directly affect the workers (as well as health) of the country. It is also the house of trade unions. Strikes and protests are already in full swing and most likely will grow in intensity.

I’m looking back at the Sabian. A new continent rising out of the ocean – Hmmm. Is it possible that something positive will be born from the deluge of debt, the ocean of wastefulness, the tears of many nations struggling to just live their ordinary lives?

Marc Edmund Jones says of this degree
“When positive the degree is a revolutionary potentiality by which each individual is enabled to remodal the entire face of the universe, and when negative, a genius for futile turmoil and persistent upset.”

This Full Moon, resolve to take a long hard look at your incomings and outgoings. Where can you save more, where you can spend less. Be clear on what you need to invest in and where money is frittered away.

Taurus at its most basic level is about physical survival as well as earthly pleasures. In today’s society this tends to mean having a financial basis which meets your current level of need (survival) as well as want (pleasure).

Essentially the Taurus-Scorpio axis in astrology is about how we share our
resources. This Full Moon suggests that we all need to take responsibility for our own debts, savings and attitudes to money. We don’t need to follow the horrendous example set to us by the powers that be. Instead, we the people can vote with our hearts for we are ALL the heart of Europe. It is up to us to become conscious of the new world we are manifesting together. Let the politicians bicker about whose fault it is. We can simply write ourselves a new script.