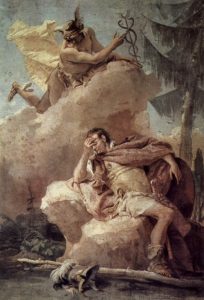 Erin Sullivan compares the cycle of Mercury with the story of Prometheus and his brother Epimetheus. When Mercury turns tail, it’s during the Epimethean phase.

Epimetheus was the rather hapless brother of Prometheus. Despite warnings from Prometheus, Epimetheus decided that Pandora would make a rather fine wife even though she was a gift from bad ol’ Zeus.

Zeus gift-wrapped Pandora and sent her to Earth escorted by Hermes (the Greek name for Mercury). On the way, Hermes couldn’t resist playing a trick. He gave Pandora an ornate box and then whispered in her ear that she couldn’t open it. She resisted for as long as she could but poor Pandora couldn’t contain her curiosity. She peeked into the box and let loose all the devils and demons that plague humankind. All that was left in the box was hope.

Can you imagine the look on Epimetheus’s face?

I imagine it was pretty much a reflection of what happens when Mercury turns retrograde. Suddenly we seem beset by demons and devils. They put their fingers in all kinds of pies, screw up communications, trash transport plans, cast doubt and uncertainty where there was once sureness and conviction.

We come to expect difficulties, anticipate problems and even fear Mercury retrograde. We tell each other not to sign contracts, not to post anything important and back up work. Big decisions are best put off…but why?

Because all the details that Mercury provides us with need a context. Mercury is a go-between, flying between the Gods and humankind. He is the only one who is allowed passage to and from Hades. Mercury is in the singular position to know both the light of God and the depths of Hell. In other words, he connects our spirit to our shadow, the conscious to the unconscious. It is Mercury who transports a dream to our waking mind. It is Mercury who is behind the devils that plague our thoughts.

It is not enough for us to know, we must understand. Only by connecting dark and light; the little picture and the big picture, can we really learn. Paradoxically, sometimes we can only keep moving by standing still. When the outer journey stops, we move to an inner journey; one where Mercury trips us through the shadowlands so that you might know your demons a little better. Because when you know your demons and realise they aren’t so bad after all or, you have banished them in the style of the Good Witch of the North, then you can truly look forward. Mercury retrograde has a way of clearing your mind so that you can fill the gaps with a positive outlook – hope.

When your post doesn’t arrive, when you miss your train, when the deadline passes but the project still isn’t done, Mercury is also reminding you to become aware of cosmic time. The time we live by is human made. This is why we experience leap years where we ‘catch up’ with the Sun. Our modern lives in the western world have become starkly alienated from natural cycles. We forgo sleep to get up early for work. We stay up late to fill every hour possible before we have to go back to work! For many of us, there’s no time to think – it’s one deadline after another.

Look to the house where Mercury stations retrograde. This is the area of life which currently needs a review, contemplation and rumination. It’s the part of life where, like Epimetheus, you look back to see where you might have done things differently had you had the knowledge you have now. Mercury is asking you to make time for reflection – and if you don’t, he may decide to make the time for you!

On May 21, 2022, Mercury will conjunct the Sun. This inferior conjunction marks the beginning of the Promethean phase. In the well known story, Prometheus stole fire from Zeus and gave it to humankind. The discovery of fire was a major turning point in our evolutionary history. When Mercury is conjunct the Sun, it is like Prometheus stealing fire. It also marks the beginning of a new Mercury cycle.

At the inferior conjunction when Mercury is retrograde, we often can experience a sudden sense of urgency. You might feel all fired up and ready to go but something, someone or circumstance still seems to hold you back. In giving you fire, Mercury is giving you a vision of the future. Prometheus means ‘foresight’. Sometimes people can experience frustration because they can clearly see where they want to go but they are still at a standstill. The point is that in order to get from A. to B. you need to know where A is first.

After the solar conjunction, Mercury will begin to rise before the Sun, becoming a morning star. It’s rather like Mercury is in boy scout mode, foraging for information, gathering resources and pulling together plans which are fit for purpose (the Sun).

Between the inferior conjunction to the Sun and the station direct, it is best to keep the inner fire burning by gathering what you need for your next adventure. Look to the house where the solar conjunction occurs and take note of any planets or points it aspects. These aspects can perhaps be considered fuel for the fire.

On June 3, 2022, Mercury will finally turn direct at 26°Ta05′. and you can start to make headway with your plans but be prepared for glitches. Mercury has been over this ground already and you too may need to go over stuff one more time before you begin to feel like you’re moving forward. Mercury will fully emerge from the shadows on June 19, 2022 when he passes the point he reached before this retrograde cycle.

The Promethean Mercury will keep you in forward flight until July 16, 2022 when the superior conjunction of the Sun and Mercury takes place. Mercury is the other side of the Sun, farthest away from us on Mother Earth. By this point, our plans inspired at the inferior conjunction back in April have gone as far as they can go. Once again we must return to the Epimethean phase where we begin to reflect upon our successes and failures. As evening star, Mercury is now in the dark, looking back on a hard day’s work (so to speak). This continues as Mercury moves to his greatest eastern elongation and finally halts you in your tracks at the station retrograde.

And so the cycle begins again.

The key to the Mercury retrograde is to allow him to do his work. Let yourself slow down in the area of life indicated on your natal chart. Become aware of what blocks you, the thoughts that plague you. Let you mind wander deep into uncharted territory. Face your fears. Connect with your deep intuitive self. Let yourself be filled with fire, inspired by a vision of what could be. Hold it in the forefront of your mind. Above all, have hope because whilst Mercury likes to play the joker card sometimes, if you play by his rules, he will leave you smiling.