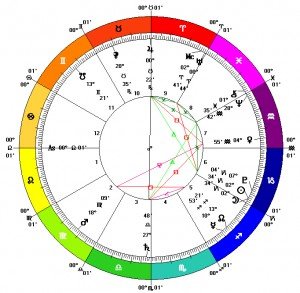 The New Moon is conjunct Pluto, square Uranus, trine Jupiter and sextile the Chiron-Neptune conjunction. Ruler Saturn is still working his way through Capricorn and in a waning opposition to Jupiter.

The outside world continues the push-me, pull-you, expansion and contraction feel of the opposition.  As I type this, I remember my Father showing me how to break a piece of wire by bending it forwards and backwards over and over again until it snapped. There seems to be brittle tension in the square to Uranus, a sense of wanting out of the rat race, out of the constant march of money, out from the banks and the corporations, sales and lies. Perhaps it’s wanting out from bills, tax forms, insurances and dental checks!

I wrote in my weekly cosmic tides that the square to Uranus seems to pose the question: –

“Are you doing the same thing over and over and expecting a different result?”

The New Moon in Capricorn raises issues about old traditions, conventional outlooks and building oneself a nice little retirement nest egg. Capricorn tends to sacrifice the now for the possible pleasure (or rather security) of the future. Pluto conjunct the New Moon could be experienced like a great pressure weighing you down; the pressure of responsibilities that need to be attended to. But it doesn’t have to be like this. Pluto, can also show you a way to shuck off the shackles and the underlying tension from the square to Uranus may just give you enough rebellious spirit to say ‘to hell with this’! Yes, very Pluto…

But it’s not about walking away from responsibilities. Friends, family, partners, employers and clients, the relationships you’ve built are important. This Moon is about looking at your ability to respond. Are you carrying your duties on your back, weighed down, negative, feeling put upon, chained, restrained, hiding your light for fear of letting someone down, letting someone in or letting them go?

Uranus stimulates, irritates you until something has to change. Pluto will simply sit on top of you until you release something. It may be an attitude, a duty that was never really yours to begin with, a way of being that no longer serves your long-term goals. Saturn opposite Jupiter is about finding the balance (emphasised even more with Saturn in Libra!), slow expansion, keeping your sense of humour when things around you look dismal. It’s about seeing the good in the bad, ying and yang, allowing time to see things blossom.

The New Moon is trine Jupiter. Unlike Saturn, Jupiter is large and limitless, spreading his big arms and embracing everything at once. Jupiter says you need to have faith in yourself, believe in yourself – believe there is enough for everyone. Life is limitless. Jupiter transiting Taurus is about allowing things to unfold organically, getting in touch with your physical needs, allowing yourself to enjoy the moment every now and then. It’s also about recognising opportunities and tuning into cycles.

The New Moon chart fixes the waning square between Venus and Saturn creating a t-square between Saturn, Jupiter and Venus. With Venus in Aquarius at the apex, Venus is the key to understanding between the Jupiter and Saturn opposition. Venus is certainly challenged here – wanting love and finding it hard to come by, wanting to both spend and save at once. She desires much (Jupiter) but probably can’t afford it (Saturn!).

But Venus is in Aquarius wants everyone to just lighten up! So what if your partner is grumpy or you can’t afford the latest new bling! Venus in Aquarius is happy just doing something different, reaching out to her fellow humans, stirring things up a little to get the party going. It’s about being surprised when you like a new band who play a style of music you never usually listen to or enjoying the company of someone you never would have anticipated clicking with. Venus says, if all this Saturn and Jupiter stuff is getting on your nerves, go out and play! Discover something new!

The Sabian Symbol for this New Moon is

“A Human Soul, In Its Eagerness For New Experiences, Seeks Embodiment”

Staring at the New Moon chart, I sense the power of the Pluto conjunction. Small but incredibly dense in structure, he weighs into you, forces you within, deep down inside to that pinprick of light – your essential spark.

That spark once travelled to Earth, aware of the lessons it needed to learn in this new life. The spark flew, compelled by flesh – the experience, wonder and joy of being alive.

Deep inside, this joy lives on. It is the part of you that is free and unencumbered: the part of you that knows this is an illusion we have built for ourselves (the new Moon is sextile Neptune-Chiron). Much of our pain is caused by feeling fixed within a different reality. But reality is malleable dependent on your mood and perceptions. Your essential spark is connected to something as old as the universe and is as brilliant as the brightest star. It was there in the beginning and it will be there in the end. It’s shining – right now!

This New Moon is like intense light within darkness. It may not sit easily with you, but it has the potential to change you, stripping away all that as been holding you back ready for new mountains to climb in 2012.