This powerful Full Moon is a live wire. Firstly, the Moon is in her ruling sign. As a Cardinal sign, Cancer is as feisty as it is emotional and quite often this Moon can trigger your defence systems. Emotional walls are thrown up or come tumbling down. Cancer is the sign of Mother. Mother can be the soft warm skin you curl up against to cry your heart out or the warrior clad superwoman who faces down anyone and anything that threatens her child.

The sextile to Mars is a helpful hint suggesting that during this highly emotive time, you are being given the opportunity to understand the way you defend yourself. Rather than crumbling at the least little thing (Moon sesquiquadrate Chiron in Pisces), Mars is there to remind you that it is ok to assert yourself. It is ok to protect yourself and those you love. Sometimes you have to.

Tension exists in the chart between Mercury and Uranus which perfect to a square shortly before the Full Moon. Mercury sits on fixed star Alnasl situated at the sharp point of the arrow in Sagittarius. News that strikes at the heart perhaps. Normally I don’t think too much about the houses when I cast a lunation chart but in this case, my eye is caught by Uranus sitting on the cusp of the 4th house with the square to Mercury just on the ascendant from the 12th. This chart was cast for London, UK. There’s an unsettled feeling. Mum might be on the warpath.

The Moon herself sits on fixed star Wasat situated between the twins of Gemini. The star is listed by Robson as “Of the nature of Saturn. Connected with chemicals, poisons and gas. Violence, malevolence, destructiveness as a first principal.”

Mars is conjunct fixed star Denebola in Leo the lion’s tail. In my mind’s eye I see my old cat, eyes slit and tail wagging menacingly, letting me know that he’s p*ssed and ready to attack if I so much as dared to look at him. Mars conjunct Denebola according to Robson is “Bitter, vindictive, cruel, unpopular, loss of position and public disgrace. 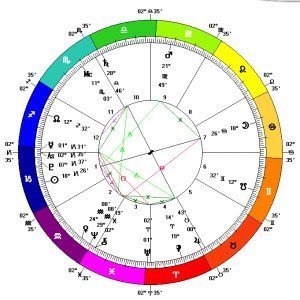 Whilst the Moon is in a positive aspect to Mars, the sextile is one which we need to actively take advantage of. Otherwise this Martian influence could simply become a cat fight with bitter disputes about who did what to whom.

I look at the chart and think of being shaken at the very foundations, of eruptions, of some shocking news. But whatever it is, it’s better out than in (Mercury trine Jupiter). Mercury is also perfecting a sextile to Chiron. It’s like the piercing point of the arrow is lancing a wound that needs to be cleansed. It’s not the time to fall apart. Black Moon Lilith (true) and grumpy Eris are travelling together in Aries and both turn direct around the Full Moon. Both are square the Moon. It’s about dealing with the fall-out. Neither of these ladies are going to back down or back off. Both will be sharpening their nails with a gleam in their eye.

This is a Full Moon with claws. With helpful aspects to Mars, you have the courage to face what you need to face. It’s about remaining strong in the face of opposition without resorting to name calling and cat fights. It’s about being hard on the outside but remaining soft on the inside. Being assertive doesn’t mean you have to play tough and snap your pincers at anyone who comes near. It’s about learning to distinguish between real and perceived threats, standing your ground, standing up for what your believe in and value. Like the archetypal Mother figure, it’s about protecting from a deep and vibrant place of love.