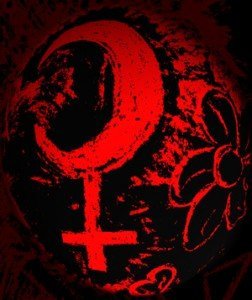 Mean or True – which do you use? This is one of those discussions between astrologers where everyone has an preference and opinion. Perhaps I should amend the word ‘everyone’ considering not every astrologer uses Black Moon Lilith. She is a contentious issue in some circles but despite some misgivings, she isn’t going away.

I’m not going to pretend for a second that I understood initially why I made my choice of which Black Moon to use. It was purely based on my association with the words ‘true’ and ‘mean’. Mean is just…well…nasty! “True is the truth” quipped my mind so I plumped for that version.

But as I got to know Lilith and her essence got to know me, I started to toy with the mean version. I’m an astrologer after all and it’s important to figure out what works for each of us in practice. But Lilith turned mean. She didn’t want to play. She shouted me down. So before she truly kicked my backside, I reverted back to the True. Astrologers such as Marina at Darkstar Astrology and Kelley Hunter however have elegantly combined the use of both True and Mean Lilith.

But what exactly are we talking about when we talk about Mean and True Lilith?

I decided to go back and find out exactly what it was all about.

There is a subtle disagreement about what Lilith actually is in the chart. She is described as either the apogee of the Moon or the second focus of earth – huh?

Ok, so let’s start at the beginning.

The Moon travels around the Earth.

The Earth-Moon system travels around the Sun. 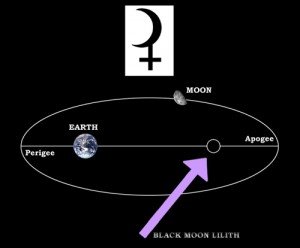 The orbit of the Moon around the earth is an elliptical shape rather than a perfect circle. This means that there isn’t one central point around which the Moon revolves, there are in fact two. One is inside the earth and the other – well the other is what we call Lilith. Astronomers however would call this other point the second focus. I struggled to get my head around this until I saw a picture of how to draw an ellipse which reminded me of my scary art teacher at school who used to throw various objects at you if you didn’t listen but I digress…

Check out this image here then come back…

The foci are centres of gravity. Lilith in this context has weight yet she is also invisible. Already we have a sense of her – a ghost in the system that affects us even though we can’t see her. It’s funny, in mythology, Lilith is repulsed by iron. The core of the earth is mostly iron. When I look at the two foci, I think of Earth on one side, Lilith on the other like two magnets facing north to north.

Let’s go back to the Moon’s elliptical orbit around the Earth. If you check out my image above, you can see that the elliptical orbit will at one point put the Moon at the farthest point away from Earth that she can be. At the other end of the spectrum, she is at her closest to Earth. The furthest point away is the ‘apogee’, the nearest point is ‘perigee’. We see this in action with so called ‘supermoons‘ like that which occurred in March 2011. Supermoons are when the Full Moon coincides with the lunar perigee. At these times, the Full Moon looks super big!

Looking closely, you can see that from Earth’s point of view the second focus and the moon’s apogee are in the same sector of space, at the same degree in the zodiac as each other. So really when astrologers say Lilith is the second focus or Lilith is the apogee of the Moon, both are right. Personally, I take both points into account in the symbolism.

The thing is, astronomers and therefore astrologers have a hell of a time calculating the actual path of the Moon. The ellipse itself isn’t the clear straight line you see on my diagram. It’s wiggly like it was drawn with a seriously bad hangover. A combination of space factors such as the gravitational pull of the Sun tug at the Moon so that she wobbles around us.

So what has all this to do with mean and true Lilith?

Because astronomers can’t calculate precisely where the Moon is moving next, they use complex calculations to get a general idea of her current orbit. The mean orbit simply smoothes out all the potential wiggles in the line by working everything out on average. Once this mean orbit is plotted, the Moon’s apogee (or rather Lilith) can also be calculated.

True Lilith is calculated a little differently. In this case, the possible orbit is based on the moon’s current trajectory. The apogee/Lilith is calculated for that moment. In the next moment, that position may change. It makes me think of pulling a tarot card which predicts the future given the current situation. Change the present and you change the future. Lilith has this prophetic sense to her. A primal call deeply connected to the simple essence of being – and non-being. She is a wild card.

Mean Lilith never retrogrades whereas True Lilith leaps backwards and forwards through the zodiac seeming to echo her flight from the Garden of Paradise. Her eccentric course seems to say “I will go where I please – the hell with you!”. This wild motion to me seems more representative of Lilith’s energy. By re-visiting points or planets in the chart, she seems to be insisting we listen to her. By repetition, she makes her presence known.

True Lilith is technically called the ‘osculating apogee’. I’d not come across the word ‘osculating’ before so, ever the English student I looked up the meaning. It’s derived from the Latin word meaning ‘to kiss‘. Whilst I was there, I also looked up the etymology of ‘apogee‘ – it means ‘away from Earth’.

But what is most fascinating is this – Lilith is only truly defined when she is either exactly conjunct the Moon or exactly opposite the Moon. At all other times she is simply a potential who may or may not be really there. But when she is conjunct and opposite the Moon, that’s when we see her. The Moon brings her to life – or perhaps like a ghost, the Moon provides the psychic lens by which we can see her. I think there is far more study to do on this. Does Lilith conjunct or opposite the Moon in the birth chart manifest more acutely? In these positions is she given a voice like a spirit speaking through a medium? I have noticed some very stark manifestations in charts of clients who have True Lilith conjunct the Moon. More on that to come in the future.

I adore Lilith – both her darkness and light. I have seen her in my dreams. She has been the night hag sitting on my chest choking me, a beautiful seductress pulling me to her breasts, an ancient witch showing me shelf upon shelf of occult tomes. She was there in my Father’s fist connecting with my head. She was there in my absolute refusal to submit. True Lilith is conjunct my Sun. I have touched that black murderous rage, felt invisible, experienced her absolute sense of connection. I remember floating in space, vast and beautiful hearing her whisper songs of the stars. And I see her looking back at me sometimes in the mirror – and then with a cackle she’s gone.

To find Mean and True Lilith in your chart at Astro.com
Create your Chart here

If you want to find True Lilith in your chart, type in h13 in ‘additional objects under Free Horoscopes – Horoscope Chart Drawings – Extended Chart Selection