I remember reading about someone who decided to run a marathon. He talked about needing to just concentrate on your own race and not think about anyone else. It’s something that’s bothered me recently. At times I’m hard on myself, criticising everything from my lack of focus to failure to meet my deadlines (by these I mean impossible deadlines set by myself!). Sure yes I can write 20 posts, a novel and an album in a month – no problem! I get carried away by the tide, floating peacefully to the magical ‘other side’ where life is inevitably full of flowers made of candy, handsome princes and fairy tale happy endings. If I can just do all of this then everything will be perfect I purr to myself. Until I come up for air and the cold light of day laughs hysterically at me.

I love to read inspirational stories of people who have changed their lives, motivational books and quotes. I get lost on the net reading about people who have written novels, marvel at other astrologer’s work, get inspired by artist’s paintings and musician’s song’s. The breadth and depth of human creativity never ceases to astonish me. And often I’m at the same time berating myself for not getting on with my own creative projects. Sometimes, with a Aries stellium, I get a little caught up in the ‘race’ to get to where I want to be, and consequently my head dips, I breathe water through my nose and then I burst hiccupping through the surface wondering what the hell went wrong and why is everyone ahead of me?

The opposite Sabian where the Sun sits is A Master Instructing His Disciple – note that the word ‘disciple’ is singular not plural. Here is a one on one encounter – the Disciple sits at the feet of the Master and absorbs what he needs to learn. He’s not worrying about whether the Master’s other disciples are more spiritual or more enlightened than he is. Spirituality is a journey, an unfolding that we can only do at our own pace. The Master is such because he recognises the stage that the Disciple is at – sees the bigger picture. No doubt he once swam in an ocean of confusion but he has learned to go with the flow. 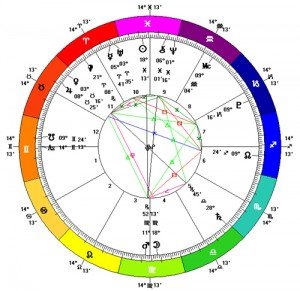 The Full Moon is conjunct Mars and sesquiquadrate Venus. With Mars retrograde it feels like a tense alignment. It reminds me of salmon swimming upstream, sperm battling to the egg. There’s a sense of struggling against the tide. And sometimes we have to in order to put things right, to change. Sometimes you need to break habits in order to achieve your dreams. Sometimes you need to use your willpower, fight against inertia, re-evaluate what is important and what isn’t in order to use your day productively, to keep moving forward.

Mercury, ruler of this Full Moon, is about to turn retrograde. Whilst not yet stationary, the Winged Messenger is slowing down and agitated by Uranus. I’m reminded of an old song by Danielle Dax ‘Fizzing Human Bomb‘. The two together are wired and with the Moon conjunct Mars, it feels antsy. Mercury and Uranus are also square to Pluto. Whilst the Uranus-Pluto square isn’t yet exact, its effects in the wider world are becoming more and more obvious. Things are breaking down and it feels more than a little chaotic out there. I’m noticing that in the chart cast for London, the Moon sits in the 4th house – it feels like there’s trouble brewing at home.

There’s an escape route found in Mercury’s trine to muse of dance Terpsichore – move your body to work off any excess energy, dance out your anger. Mercury is also trine the North Node in Sagittarius, indicating it’s important to keep in mind your future vision. Where do you want to get to? Never mind anyone else.

I decided to pick a tarot card for this full Moon. I use the Celestial Tarot when working with astrology. I didn’t even get as far as shuffling the pack fully before Mars (The Tower) threw himself out of the pack. The red warrior is fiercely wielding his sword, smashing through a wall, bricks are flying. His energy in this chart is especially strong which makes sense with the Full Moon occurring in the sign where Mars is currently retrograde. As Mars is retrograde, I’m thinking of reverse meanings for the Tower which tend to focus on trying to avoid the inevitable, avoiding change. It’s also forewarned is forearmed.

This Full Moon brings to light irritations that impede you, habits that halt your progress (or surreptitiously work against your primary goals). It shows you where you may need to discipline yourself, where you may need to be humble. It is also about taking practical steps to do what needs to be done. The house in which the Full Moon occurs in your natal chart will show you which area of life to work on. It’s time to focus on your own journey, kick out dissenting voices inside and out. Embrace the changes that are afoot because they are coming ready or not. This Full Moon may show you a strength you didn’t know you had.