Shadows and Morals
A Lunar eclipse occurs when the Earth passes between the Moon and the Sun casting a shadow across the face of the Moon and blocking out her reflected light. The Moon in astrology is connected to our emotions. Symbolically, the eclipse can symbolise seeing our own shadow – our weak spots and those instincts we deem too ‘dark’ to consciously accept in ourselves. Our shadow is what we can project onto another, often a partner but sometimes also friends, colleagues and strangers.

A man who is unconscious of himself acts in a blind, instinctive way and is in addition fooled by all the illusions that arise when he sees everything that he is not conscious of in himself coming to meet him from outside as projections upon his neighbour.
Carl Jung – Essay The Philosphical tree

The Lunar Eclipse occurs in Sagittarius, the sign of higher knowledge and visioning. Sagittarius is half man, half horse and represents the fine balance between animal instinct and human morality. Our laws, morals and religious instruction have developed over time in an attempt to allow us to live together as a group. Whilst with all our problems and wars there is much to contest here about how successful this has been (!), essentially that is the idea – that we need some kind of cohesive agreement between right and wrong.

It is our ability to philosophise, to find meaning in the universe and to educate ourselves that perhaps differentiate us from the rest of the animal kingdom. Yet when we look at these rules we find many are bent and broken according to ones own philosophy. For example, most of us would live by ‘thou shalt not kill’ whether Christian or otherwise yet countries and communities wage war on each other – sometimes in the name of ‘God’.

And so sometimes we war within ourselves, fighting our instincts especially when we feel someone has transgressed or invaded our territory. We each have our own personal rules about what it right and wrong, our hidden terrors, our basest emotions and private instincts. Typically, it is sex, fear and death (covered by the previous sign Scorpio) that slide into our shadow – those illusive, overwhelming, embedded fears that lick at the base of the spine.

When it comes to living together as a community – whether a household, a village, city, country or world as a whole, we somehow have to learn to give and take. We can’t just bash someone over the head because we don’t like them. We have to compromise, try and get along, tame anger, challenge fear and find a moral code that we can live by.

Enter Chaos
The eclipse sits opposite the asteroid Chaos which is conjunct the Sun. It’s like we are being shown a glimpse of what we could descend into if our fragile laws become any more twisted and broken. But there’s something deeper here: Chaos is the darkness that lurks in the darkest corners of our minds. It’s what we most fear – inner chaos where all our demons come out to play; fears that defile the avenues of the mind, twist memories, taint love, steal hope.

Chaos is what happens when the rules are broken en masse, when riots happen, when civil war begins. But inner chaos is even more terrifying. If you cannot trust yourself who can you trust?

But Chaos is something else – Chaos is also “the void at the beginning of creation” Chaos IS creation – the beginning of all things. When things change, whether inwardly or outwardly, it is often accompanied by a sense of chaos because we need this disruptive, bubbling, creative force in order to begin. Perhaps the eclipse is teaching us something here about being willing to face the void within – to look into the vast emptiness inside and instead of seeing chaos, seeing the potential of what could be.

Charubel and Sabian Symbols
Normally I look at the Sabian symbol for the lunations but this time I was drawn to look at a different degree symbolism system – that of Charubel. In this system, the symbol for the eclipse degree is: –

As we look into the chasm of space, so too must we look to the inner void. It brings as many questions as gazing into the cosmos. As we wonder whether aliens exist somewhere beyond our galaxy, so too we can see parts of us that seem alien. This is how we become alienated from each other – through refusing to accept our own demons. In turn we demonise others.

Interestingly the Sabian symbol for the eclipse is: –

If the Ground Hog can see his shadow on the 2nd February, winter will continue.

In the context of this eclipse, the symbol suggests that we must face the shadow in order to be adequately prepared for the future. At least by looking for your shadow, it shows an awareness of it – an awakening. The eclipse is trine Uranus, also called The Awakener.

Eclipse T-Square 1 – Moon opposite Sun-Venus square Mars
The eclipse is part of two t-squares in the chart. Firstly Mars sits at the apex of the t-square created between the Moon’s opposition to the Sun and Venus. The Sun and Venus in Gemini opposite the Moon feels like an ‘everything is fine, darling’ kind of aspect. Venus wants to placate and to please, conjunct the Sun she wants to charm at the party. Opposite the Moon she really doesn’t want anything too heavy. But Mars isn’t having any of it. In Virgo he’s got work to do. He’s not doing this for the good of his health you know! This configuration may bring up issues between people (especially couples) who are avoiding the issue, chatting about inconsequential things instead of what really matters and/or putting on a brave face. 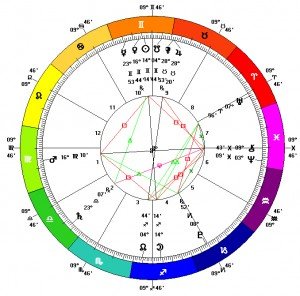 The Moon sits at the apex of a t-square with Mars and Chiron. Chiron is wounded, emotionally hurt in Pisces, Mars in Virgo is angry about everything; picking at the smallest transgressions. Mars might even pick on Chiron because bullies like to pick on the weak…Chiron might play dead or try to appeal to Mars’ sympathies. Both need to turn to the Moon but it’s not easy. It’s not easy to tune into how you are really feeling when you’re flaming angry or when someone has hurt you deeply. It’s a struggle to accept that maybe you are playing the victim, playing the persecutor, playing out your shadow. But the eclipse says you need to be prepared to look into the void and deal with things that have been swept under the carpet.

Stationary Neptune
Neptune is stationary in the eclipse chart – stationing retrograde a few hours after the eclipse. Neptune is square the North Node. It catches my eye, as if momentarily my imagination is cast outward, projecting a dream image onto the waking world. Neptune seems to call my attention with his stillness, like a meditating Buddha, supreme compassion.

Maybe that’s all it takes, a moment of compassion, for yourself, for another. Neptune is the connective tissue, hands linking to hands. The square to the North Node shows the sense of struggle to achieve this.

Jupiter conjunct Lilith
Jupiter, ruler of the eclipse is conjunct Black Moon Lilith. In one creation myth, Lilith was born from the void, an entity that desired to become a physical being and enter paradise. Lilith is both demon and instinct. She more than anyone understands our shadows. Lilith conjunct Jupiter can amplify fear or we can choose to believe in her, put our faith in her, When you find meaning in your own darkness, then there is light.

Lilith and Jupiter sit on the Charubel symbol “A crucifix” apt for the religious orientated Sagittarius eclipse. The crucifix has many associations, some good, some negative but essentially here I’m drawn to its redemptive qualities. Much like stationary Neptune, Lilith and Jupiter ask, can you forgive yourself?

Questions and Reflections for the Lunar Eclipse
Can you love your demons?
What do you believe in?
Can you forgive yourself?
What laws have your created in your own life?
Who laid down the law when you were a child?
What is chaos to you?
When you look into the vastness of space, how do you feel?