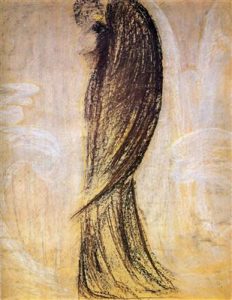 Asteroid Angel was discovered by C.S. Shoemaker and D.H.Levy (yes the ones after which the Levy-Shoemaker comet was named which famously crashed into Jupiter in 1994). The date of discovery of Angel was June 4th 1992 at Palomar Observatory in San Diego, California. Angel has an orbital period of approximately 5.7 years.

Doreen Virtue, famous for her angelic work, suggests that one of the ways angels can communicate with us is through numbers. In her article ‘Number Sequences from the Angels” she says :-

“1’s and 9’s, such as 119 or 991 – A new door has opened for you as a product of your thoughts. You have the opportunity to stare your thoughts in the face and come eye-to-eye with your own creations. Let the old fall away, as it is replaced with the new in accordance with your desires.”

The Light Connection
Angel was named after Roger Angel, a professor of astronomy. According to the information on the University of Arizona’s website, Professor Angel has been instrumental in the development of telescope lenses, vastly increasing their capacity to gather light and hence seeing further into the cosmos.

In a telescope, the mirror serves the purpose of gathering light and focusing it on a single point.

“Telescopes actually work by collecting more light than the human eye can capture on its own. The larger a telescope’s mirror, the more light it can collect, and the better its vision.” Hubble Site

Angels are often connected to ‘light work’. Doreen Virtue used the term her book “The Lightworker’s Way”. In spiritual circles, we often talk of ‘seeing the light’ or experiencing ‘enlightenment’. In ancient history you find Solar deities – Ra in Egypt, Helios in Greece, Sol Invictus in Rome and Lugh for the Irish Celts amongst many others. In Christianity ‘Jesus is the light’. Light and God/The Creator have been interchangeable quite probably since time began – as we see in the first lines of the Bible “Let there be light”.

An angel can illuminate the thought and mind of man by strengthening the power of vision.
St Thomas Aquinas

Whilst many consider Angels to belong to specific religions such as Christianity, their history is ancient. Encountering an angel one senses something old. The book of Enoch speaks of Angels being here before mankind. Whatever their origins, they are considered messengers of God and an expression of pure love. That said, whilst much modern day associations focus on the love and protection provided by angels, there is also a sense of enormous strength in these beings. Note that Mars is powerful in his own sign of Aries in the discovery chart.

In the discovery chart itself, Angel sits on the Uranus-Pluto midpoint as well as the Neptune-Pluto midpoint. It seems somehow fitting that this asteroid should be connected to the outer transpersonal planets. Angel shows that awakening to profound unconditional love leads to powerful transformation.

Even more expressive symbolically is the Finger of God aspect pattern in the discovery chart – otherwise known as the Yod. The Neptune-Uranus conjunction sextile to Pluto form the base. Mercury forms the apex which is in keeping with Angels as divine messengers. Mercury is conjunct the Sun; in touch with God/The Creative force. With Angel opposite Mercury, this forms a boomerang yod, the energy of Mercury bouncing back to be manifested through Angel. Much like the Finger of God suggests, Angel has something to do with showing us the way – pinpointing a path.

Mercury sits on the Charubel degree:-
“A traveler struggling onward in the midst of a terrible snow-storm. He pushes forward in hope of finding a refuge, but the storm thickens, it grows darker and darker. The brave man is lost in the darkness. “

Often Angels seem to appear when all else has failed, at our darkest times of need.

Without a time of discovery noted, I decided at random to choose 10pm at night, thinking of when the skies begin to grow darkest. Whilst fully aware that this time could be wrong, I was struck by the relevant symbolism in the chart – perhaps synchronicity was at work here!

Uranus conjunct the Ascendant caught my eye immediately. Uranus is the higher vibration of Mercury. Uranus also rules technological advancement, innovation and invention which can all be attributed to the man whom this asteroid is named after. It’s interesting too that Angel appears in the 12th house – the house typically associated with spirituality and divine connection. Angel was in Sagittarius on the date of discovery. The natural house of Sagittarius is the 9th house or The House of God. Angel in this sign suggests that it is concerned with the concept of faith.

Angel in Your Chart
Whatever your spiritual path, asteroid Angel’s placement in your natal chart shows where you have an opportunity to receive divine guidance and where you may feel watched over and protected. By aspect it may also show where you encounter living angels, those people that appear in your life just when you need them most.

In my own chart, Angel doesn’t aspect any of my natal planets but it sits in my 3rd house. I often have a sense of something whispering in my ear, especially when I am doing readings for people. I have also often felt that words are given to me when doing creative writing or song writing. I don’t tend to think up the words, I write what I hear – as if they have already been written. Perhaps this is because Angel sits exactly on the midpoint between my natal Jupiter and Neptune. I never feel quite alone in my mind. There is always the quiet voice of something else.

Keywords and Phrases for Asteroid Angel
Divine guidance, surrendering to a higher power, messages from God/Creator, divine intervention, guardian angel, an angel in disguise, angelic assistance, a helping hand, being shown the way, spiritual healing. Seeing the light, a mirror for the soul, having your eyes opened to all that is, change of consciousness, enlightenment, cosmic connection.

How to find asteroid Angel in your chart.

Go to Astro.com
Create your natal chart
Click on Free Horoscopes > Extended Chart Selection
Enter 11911 in the ‘additional asteroids box at the bottom of the page.