This Lunar eclipse seems full of the duality of Gemini. One minute I look at the chart and it seems very still and poised, the next minute it’s like the planets are running all over the place! This Full Moon in Gemini Lunar eclipse seems to set everyone talking at once, with almost every planet raising their voice a little louder to be heard. The oddest thing is that Mercury seems rather out on a limb and he’s the one we need to watch as ruler of the eclipse. He’s only just turned direct and still in the retrograde after-shadow. He’s there in the mix with a wide conjunction to the North Node and a sesquiquadrate to Uranus but somehow looking at him leaves me in the dark, which is perhaps exactly where he wants us to be.

But everyone else is yelling. In fact it’s as if Zeus himself is roaring down from the heavens. A tight Finger of God (yod) aspect is present with the eclipse at the apex. The base is made up of a Venus-Saturn conjunction sextile a Mars-Pluto conjunction – phew! This eclipse has some kick! And then there’s the fact that the position of the Sun in this yod makes it into a boomerang yod – so it’s rather like Zeus is balling down from the heavens and it’s reverberating across the mountains, his call bouncing echoes across Olympus.

And then we have Lilith conjunct the eclipse at the apex of the yod – she who screams the secret name of God. Something primal is clamouring for your attention and it’s not backing down. Words are raw. What you come to know (Gemini) is powerful. Gemini connects to the voice as well as the mind. I’ve written before that when we name something, we give it power. It’s as though what we vocalise now will keeps on reverberating, rippling out into the future. Emphatic words have emphatic results!

Mars-Pluto quincunx Lilith taps into unbridled force. She is dancing between absolute destruction and absolute creation. The Venus-Saturn quincunx can’t ‘tame’ her for her essential nature is wild. It’s about channelling her power into a force for good.

The Moon together with Lilith can bring up all kinds of feelings. When I see these two together in a natal chart, often the relationship with one’s Mother has been challenging. But if nothing else, Lilith with the Moon teaches you to be a survivor. Lilith knows where to find food and how to sustain herself.

Watch the Moon conjunct Jupiter as can make everything seem bigger than it is and there’s no room for power trips. The Gods may take unkindly to those who would seek to de-throne them. Likewise this Moon exposes greed whether for money, food, love or power. ‘Less is more’ may be one of the messages of this eclipse. 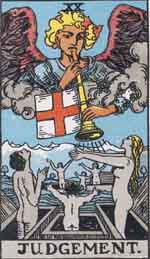 Oddly I keep seeing the Judgement card in the tarot as I write. It’s a card associated with a wake-up call. I hear the trumpet of the Archangel Gabriel depicted on the card. “Rise up”. Raise your vibration. Commit to your inner calling. Yods are often connected to ‘fate’ or ‘destiny’. They are often experienced with a sense of irritation because they point out where we need to adjust our course and they don’t let up until we’re moving in the right direction. They can feel like an invisible hand prodding you in the back, annoying and comforting all at once.

The eclipse sabian is: –

This eclipse calls upon something ancient. It’s taking you right back to the source. A well provides fresh drinking water and is a symbol of life itself. But it’s not like turning on a tap, you have to make an effort to draw water from a well. This eclipse is asking you to put your effort into getting down to what matters. No one else can do it for you.

The base of the yod is a fascinating configuration. With Saturn-Venus and Mars-Pluto, here is love in all it’s forms. Love makes us brave and strong, strengthens our sense of self-esteem and gives us a sense of responsibility. Love is the building blocks of life and love transforms. But with the sextile it’s up to us if we take the opportunity.

The sign Gemini is associated with choices and this eclipse is likely to raise issues that reflect your choices in life so far and now it seems there are more choices to be made. It’s make your mind up time. Mercury’s sesquiquadrate to Uranus feels like you’re waiting for inspiration to strike but it doesn’t always work like that. Sometimes you need to go in blind. The powerful yod in the chart suggests that if you can’t choose, the universe might choose for you. Listen for the call. Think. Dig deep. Draw on that well of inspiration within you.

Ancient of Days by William Blake – Thanks to ibiblio.org