The Kite Pattern in the Full Moon Chart
Whilst Cancer is a sign associated with the soft emotional Moon, moods, motherhood and home, it is also wise to remember this is a cardinal sign, full of active energy ready to leap to protect its own. This lunation forms a transiting kite pattern in the sky. I’ve removed the other aspects on the lunation chart so you can clearly see the pattern. 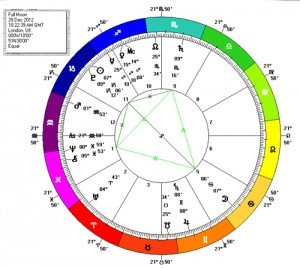 I see myself as a small child in the middle of a field watching my home-made kite skittering in the wind. My fingers are holding tightly onto the string. The wind pulls at the kite wanting to make it her own but I struggle, preferring to suffer the string cutting into my flesh than let go of my toy. The wind hisses, spits rain in my face, twists and catches my kite, twitching it into the path of a tree; tangling it around empty branches. And still I don’t let go. But if I want my kite, I’m going to have to climb up into the gnarly oak, brave his bending branches and bugs and high places that make me afraid when I look down.

The kite in the Full Moon chart is created from a water grand trine. Normally this is a very forgiving element, loose and flowing. It can give a talent for empathy and intuition but trines can also be lazy aspects. A grand water trine can be forgiving to a fault, letting people walk over them rather than standing up for themselves. The Sun-Pluto opposition to the Moon however forms a backbone. Pluto with the Sun is like the obsessive sky pulling the kite up, up, up into the clouds above the mountain. The Moon however is just as apt to rip and tear and claw in response. A Moon-Pluto opposition doesn’t gave up easily especially when it involves tenacious Cancer!

Trines from the Moon to Saturn and Chiron give a sense of being fortified. You know now that you can survive whatever life has to throw at you. You’ve learned how life can hurt and what you need to do in order to heal. The thing is, just when you think you’ve got it together, along comes the Devil (in disguise as Pluto!) ready to test that theory.

“Are you sure?” he snickers whilst kicking back in the sunshine.

“Are you sure you’ve really dealt with ALL your fears?” He yanks the chain attached to Uranus for good measure, just to remind you that life can still surprise. It’s the BOO! in the middle of the night from your friend hiding behind the door that leaves you shaking and laughing. But despite the giggles, your body is now on red alert with every hair standing on end ready to receive warning of dangers in the dark.

The Sabian Picture
The Full moon sits on the Sabian :-

This is a rather surreal image. Rabbits are often considered lucky creatures, most likely because of their similarity to the magical hare. However they are also jumpy creatures, literally. If you watch a group of rabbits grazing outside their warren, you’ll notice that they are constantly on the alert. Their noses twitch to catch unknown scents, their long ears move to the slightest sound and should anything seem out of the ordinary the whole herd will bound out of sight back down the burrow in the blink of an eye.

Humans of course are one of the greatest enemies to rabbits so it’s very strange for these rabbits to be dressed up in human clothes. On one hand I’m thinking this image combined with the Pluto effect is something about keeping your friends close and enemies closer! Are the rabbits in disguise?

On the other hand this image also shows that we are all animals on the inside.

Linking to the image of the kite, I believe this symbol is about overcoming fears, The rabbits here are in human clothes, parading themselves amongst the enemy. It is as though the rabbits have said “Enough is enough – I’m not running away anymore, here I am – deal with it”!

The trouble is with fear is that fears multiply just as fast as bunny rabbits! Sometimes you just have to tough it out, look your fear in the eye. With Pluto under the rays of the Sun your shadows are brilliantly illuminated so it’s the ideal moment to try to out-fox them.

The Asteroid Picture
Interestingly Pluto is conjunct Diana, the Roman huntress who was protector of the wild as well as of women in childbirth. She fiercely defends youngsters and virgins against the predatory advances of those who should know better. It’s interesting that today in the UK, new measures have been announced to protect children from child abuse and this occurs during the ongoing investigations into the horrifying institutionalised paedophilia that has been unearthed in the past few months. At the same time in India, protests continue after the appalling gang rape of a young woman and there has been outrage at the Pope’s ill thought out recent comments regarding paedophilia within the church. Finally the people are beginning to stand up for their rights where the establishment had turned its back.

Venus is opposing asteroid Chaos and Neptune has squared up to Pandora. There is love that is healing and beautiful and then there is professed ‘love’ that is just fear and hate dressed up in disguise.

“I did this only because I love you so much…”.
“If you loved me you would…”

The caution with that Neptunian square to Pandora is that it can leave you inclined to make everything look pretty when it clearly isn’t. There are certainly things we all would rather not see but if we’re going to look then we need to take it head on however chaotic it feels and however much it offends our sensitive nature. Neither can nostalgia (a typical Cancerian trait) for times past cut it in these changing times.

My eye is drawn back to the rabbits standing in line, their human clothes hanging over their fur. Their soft, dark eyes gently gaze at me, the human. I look from rabbit to rabbit and think – yes, we’re all afraid, we are all soft under our hard shells of hurt and pain. We need to look out for each other, protect each other. And sometimes even when we are afraid, we have to stand up to the bully’s and those who would prey upon our kindness. There comes a time when we can no longer turn a blind eye, nor can we run and hide at the sound of danger.