This lunation is heavy on Capricorn energy given that there are now five planets (the Sun, Moon, Mercury, Venus and Pluto) slogging over rocky ground. Generally when the new moon is in Capricorn, it’s time to get down to business.

There’s a no-nonsense vibe in the cosmos and it feels quite relentless. If you slip, tough – get up and get going again. If you fail – tough, try again. It’s all ‘pull your socks up and stop wallowing’.

It’s not that the universe doesn’t care, it’s just that sometimes you have to do the work whether you like it or not. And in the end, you will be happier, stronger and maybe a little wealthier for it, not to mention one step closer to your goals. 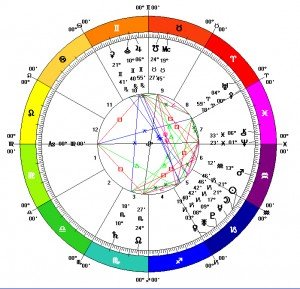 A conjunction to Mercury puts your mind firmly on the task at hand. It’s a serious frame of mind, one that doesn’t want to deal with anything overly emotional. You may feel weighed down with everything but it’s important to keep some perspective and avoid pessimism. A realistic approach will keep you grounded and more able to cope.

The new moon is just past perfection in a quincunx to Lilith. On a world level this seems to echo the consequences of the horrifying Delhi gang-rape that has prompted mass calls for change in both the law and in the way women are viewed. Capricorn is institutionalised and sometimes can seek to maintain stability at the expense of someone else. But Lilith isn’t going to let that happen. She’s shrieking from every news report in rage. How dare they! As a representative of the wounded and defiled, she is going to get under the skin of those in charge and insist on changing the minds of men.

On a personal level, the quincunx to Lilith is the wild part of you craving release from all this all work and no play. Somehow you need to give her a little space to breathe even if your to do list is still full. Otherwise Lilith is going to mess with you mind until you at least acknowledge her.

An applying sesquiquadrate to Jupiter cautions you against going overboard or thinking you need to know every last thing before you start. It’s time to shut down the excess voices, close Facebook, Twitter and your email and just get on with what you need to do. The sesquiquadrate typically evokes feels of ‘it’s too much’ or ‘it’s not enough’ and discontent can ripple into dissatisfaction so that whatever you do, you don’t feel happy with it. A simple solution is just to gently encourage yourself, remember to congratulate yourself for a job well done even if you’d rather be out playing with your friends.

The semi-square to Chiron suggests that you are sensitive to failure right now and need to curb those any tendencies towards hurting yourself because you are fumbling over the key to get to the next place you need to be. The door is probably open anyway and just a sharp nudge will be all that’s needed to get through. With the Moon also sextile to the North Node, keep your sights on your purpose and it will be easier to do what you need to do. It takes a bit of effort, I know.

Saturn, ruler of the new moon is still in a waning square to Mars and that’s just s-l-o-w going. Capricorn doesn’t need fanfares and accolades but it does need a little motivation. The trouble is motivation might be lacking and in this instance it may be a case of forcing your backside in the chair to do the work regardless because once you start, you may find that your inspiration kicks in even when you didn’t expect it to. The sextile from Saturn to Pluto and the trine between Saturn and Chiron are all still present, offering you some stability and the chance to change.

The Sabian Picture
The new moon is on the Sabian symbol

“By Accepting Defeat Gracefully, A General Reveals Nobility Of Character”.

Everyone fails at some time or another. Sometimes you have to accept that you have been defeated. It’s never a nice feeling but how you look at it will govern how you can use the experience in the future. One of my favourite motivational quotes comes from Thomas Edison who, after relentlessly trying to create a working light bulb said “I have not failed. I’ve just found 10,000 ways that won’t work.”. By accepting defeat, you open yourself up to new ways of trying to achieve your goal. Also, accepting defeat means that you have something more to learn and there are a myriad of people who have most likely walked the path before you. Nobility is also about recognising the achievements of others as much as accepting your own defeat. Do you carry the failure or the experience? Your choice.

The Asteroid Picture
The new moon is square Eris and Sisyphus. Sisyphus was the guy punished by Zeus to eternally roll a great boulder to the top of a hill whereupon the boulder would always roll back down making it an endless and pointless task. With Eris in the mix, repetitive tasks are likely to have you seething and maybe you can’t see the point of them at all. If you’ve been doing the same thing over and over and not getting anywhere, you may need a change of tactic.

The Fixed Star Picture
The Moon is conjunct Sulaphat which is in the constellation of the Lyre. Sulaphat comes from the Arabic for Tortoise. In mythology, Hermes created a lyre from the shell of a tortoise which he gave to Orpheus who eventually would charm everyone with his beautiful music.

The tortoise energy fits well into the feeling of this moon. It echoes the earthy Capricorn energy not to mention the Saturn square to Mars! Tortoise as a power animal reminds us that there is wisdom in moving slowly. Tortoise grows to a great age as she lumbers across the earth. She witnesses much and stores away all she sees. She has everything she needs with her house upon her back and is protected. Even if she is moving slowly, she’s still getting somewhere. Don’t forget the story
of the tortoise and the hair

There’s certainly some frustration present in this lunation but much of that feeling may come from expectation of where you think you should be by now. It may be that you’ve just started out on a new path and can only see the endless stretch of road in front of you. Maybe you feel like you keep running out of time or that you’re facing an impossible task. It may seem like everyone else seems to be able to do what’s required of them but you’re struggling. Maybe you’ve been working and working on the same thing for what feels like forever but still you can’t see the end in sight.

The trick this lunation is to accept that slow progress IS progress. If you find something isn’t working, no matter how much work you’ve put into it, don’t be afraid to start again. Your work won’t be wasted, it all counts towards experience and this time you will have a better idea of what works and what doesn’t. No one said it was going to be easy, but ease is a state of mind.

Questions and Reflections for the new moon
Where is there excess in your life? How can you cut down?
What do you feel dissatisfied with?
What do you feel you are mastering or want to master?
Have you been here before? What did you learn then that you can apply now?
What’s the hurry?
Are you using the carrot or the stick approach?
What gentle encouragement can you give yourself?
What do you need to see in order to keep going?