Asteroid Sisyphus was discovered on the 5th December 1972 at 02:28 by Paul Wild at Zimmerwald observatory in Bern, Switzerland. The largest of the Apollo asteroids, Sisyphus is an Earth-crosser meaning that it’s passage through the sky takes it through Earth’s orbit.

There is no suggestion currently that this could mean a collision! The orbital period of Sisyphus is 952 days or roughly 2.6 years. It is thought that Earth-crossing asteroids originated in the asteroid belt between Mars and Jupiter. They were then nudged into a different orbit by the gravitation pull of Jupiter.

The Mythological Figure
Sisyphus was an arrogant King with a devious mind and given to flouting the rules of the Gods. In one part of his story, he persuaded river God Asopus to do him a favour. Zeus had taken a liking to Aegina (daughter of Asopus) and abducted her. Sisyphus betrayed Zeus and told Asopus where to find his daughter in exchange for the river God providing a spring in the Acropolis.

Zeus was furious when he found out and sent Thanatos (God of Death) to chain Sisyphus in Tarturus (the Greek equivalent of Hell). Sisyphus however tricked Thanatos, asking him how the chains worked so that he could capture the God of Death. Ares, God of War, wasn’t at all happy that no one was dying in the battles he started, so he freed Thanatos and re-captured Sisyphus.

Sisyphus still wasn’t done with his trickery. Before his death, he told his wife to throw his body in the public square instead of burying him as she should. His wife did what she was told not knowing that her husband was actually testing her love for him. Sisyphus was outraged and persuaded the underworld Gods to release him so he could admonish his wife for doing such a terrible thing, promising to return. The Gods relented and let him go back to the upper world but of course Sisyphus had no intention of returning to the lower worlds. Back in the world with all it’s beauty and possibilities, Sisyphus wanted to stay. In the end, Hermes was given the job of retrieving him.

As punishment for his arrogance towards the Gods, Zeus charged Sisyphus with the task of rolling a boulder up to the top of a hill. Whenever he neared to top, the boulder would roll back down again at which point Sisyphus had to climb back down and start all over again. This was his punishment for eternity.

On the face of it, it seems that Sisyphus deserved his punished. He wasn’t a good man after all! But there is something about his punishment that turns my blood cold. If I imagine being in his position, I experience a deep sense of emptiness.

Finding Meaning in the Story
The story of Sisyphus has many depths. Essentially, his greatest crime was to try to cheat death. In fact, by chaining Thanatos, Sisyphus was attempting to kill death itself. Not once but twice, Sisyphus tried to outwit death, refusing the inevitable end that comes to us all. It is fitting then that his final punishment was to ensure an existence without change and without end.

On a deeper level still, perhaps the story of Sisyphus touches us, because woven within this tale is an underlying sense of meaninglessness. Sisyphus’s task is utterly pointless. Sometimes, in our own darkest hours, we wonder why. What’s the point? What does it all mean? Sometimes we too find ourselves on a treadmill repeating wake up, go to work, come home, clean the house, feed the kids, sleep, wake up, go to work, come home…

And in these dark hours, we might find meaning in our faith or spirituality –
sensing that there’s a meaning that will one day be revealed to us when we pass over to the other side. But Sisyphus has passed over. He is on the other side – and it’s still meaningless. Can you imagine the horror that there is nothing more, that there is no meaning to any of it? This is one of the questions raised by the myth of Sisyphus.

Sisyphus in the Chart
In the astrological chart, Sisyphus may reveal where we have a tendency to
repeatedly make the same mistakes or become stuck in the same pattern through fear of change. The more you fight to hold on, the heavier the burden becomes until it pushes you back to the beginning again and the cycle repeats.

Life becomes monotonous without change. Ares, the Greek equivalent of Mars, is rightfully outraged when Death is chained up. We need challenge. If we have no goals, no passion, no motivation – life becomes very stagnant.

But in all this, there is a little piece of us that might admire Sisyphus for his
outright refusal to accept death and for his ability to repeat a task that is doomed to fail for all time. In him we see the try, try and try again attitude that is a distinct feature of humanity. Somehow he captures an aspect of humanity’s indomitable spirit that lives as if it’s never going to die, that finds meaning where there may be none and fights to live in the face of death.

Perhaps the positive side of this asteroid is the ability to keep going, even when we can’t yet see the point. Essentially, he perhaps shows where we can find meaning in what we do on a daily basis, not just in our achievements or the winning of battles. 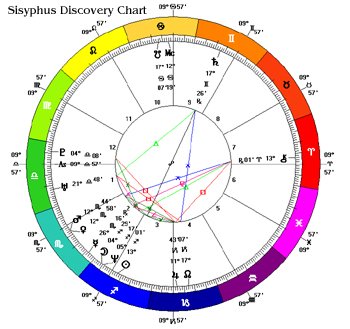 The discovery chart for Sisyphus is fascinating. Immediately we can see that the only planets above the horizon are Pluto, Saturn and Chiron – Intensity/power, restriction, wounding. All the personal planets are below the horizon. Sisyphus is in the dark.

The angles are weighted with Pluto conjunct the Ascendant from the 12th house, Chiron conjunct the Descendant and Jupiter conjunct the IC. The Nodal axis conjuncts the MC-IC axis.

Pluto could be seen to represent ‘hell’ or Tarturus. Chiron on the Descendant in Aries could be interpreted as Sisyphus wounded by his enemies because of his arrogance. Zeus (Jupiter) is inescapable on the IC. Sisyphus must find his own inner sense of meaning in a meaningless existence. This message seems strengthened by the Jupiter-IC conjunction with the North Node. The South Node connected to the Midheaven in Cancer says to me, it’s no longer about the comforts of achievement in
the outer world, it’s about fortifying ones inner self – building from the bottom
up. Jupiter is our self-belief.

Saturn opposes the Sun from the 9th house. Saturn in the 9th can indicate belief in a harsh God, one that inflicts punishment upon those who sin. The Sun-Saturn opposition is indicative of feeling weighed down by the world, troubled by one’s thoughts (Sun in the 3rd house), feeling misunderstood by authority. Here the Sun often chooses the hardest path. The brick wall often suggested by Saturn became literal as Sisyphus could do nothing else but face the rock/reality.

The 2nd house is full with the presence of Mars, Venus, Mercury the Moon and Neptune. This huddle of planets indicates that some part of the message of Sisyphus is connected to finding one’s self worth. The Moon conjunct Neptune can be a classic sign of escapism – rather like Sisyphus who deluded himself that he could escape death itself. With the conjunction occurring in Sagittarius, these two can create a kind of divine discontent, always searching. It’s a hungry Moon driven by an inexplicable emptiness.

Wisps Of Winglike Clouds Streaming Across The Sky.

Does Sisyphus only see the clouds or does he see the wings of angels?

Dane Rudhyar says this degree speaks of “The awareness of spiritual forces at work.”

Perhaps then, Sisyphus is also about finding the meaning in the mundane, knowing that there’s a reason behind it all and trusting that you are being watched over when life is at it’s hardest. Maybe it’s about loving yourself enough to keep trying.

“I leave Sisyphus at the foot of the mountain. One always finds one’s burden again. But Sisyphus teaches the higher fidelity that negates the gods and raises rocks. He too concludes that all is well. This universe henceforth without a master seems to him neither sterile nor futile. Each atom of that stone, each mineral flake of that night-filled mountain, in itself, forms a world. The struggle itself toward the heights is enough to fill a man’s heart. One must imagine Sisyphus happy.”

Albert Camus. The Myth of Sisyphus

How to Find Sisyphus in Your Chart
To find Sisyphus in your chart, go to Astro.com and enter 1866 into the asteroids which are found under the ‘extended charts’ option. The house of Sisyphus will suggest the area of life where you might struggle with the reality, repeat mistakes or find it hard to change. This area of life may cause you to go around in circles or you might fight to maintain the status quo even when all hell breaks lose.

Suggested Keywords and Phrases for Sisyphus
Starting over, repetition, meaninglessness, try again, pushing through it, pointless work, an uphill climb, a thankless task, an eternal battle, “it’ll be the death of me!”, exasperation, frustration, trial, an uphill battle, nothing accomplished, the absurdity of life, futility, cheating death, getting nowhere. Finding faith in the mundane, maintaining faith when all else fails, believing without seeing, appreciating the journey rather than the destination, acceptance that all things change, adhering to the will of the Gods, accepting your fate.