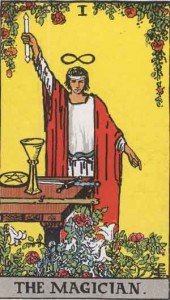 The Magician stands with his right hand raised, pointing a baton to the heavens. His left hand points to the ground. He is in touch with both Mother Earth and Father Sky connecting all things, a conductor of energy. Above his head is the infinity symbol, the perfection of thought as a creative act which reaches into the infinite beyond.

Perhaps also, it is a message to remind us that we too are woven into the fabric of the universe and that our thoughts cross space and time. His pointing hands also show that he has the power to manifest thought. The card captures him in the act of casting a spell which will bring something into being. The infinity sign also is a reminder of the figure of 8 symbol which can read ‘as above, so below’.

The Magician has the traditional tools of his trade upon an altar in front on him. The staff, cup, sword and pentacle symbolise the four elements (fire, earth, air and water) and represent the four suits of the Minor Arcana. The ground in front of him is abundant with roses and lilies. The roses also grow from above him as if shaped in an arch. The Magician’s robes echo the red and white of the flowers, showing that he is perfectly in tune with nature and that he understands the creative forces that govern it. With the Ouroboros wrapped around his middle, we see that he has developed great wisdom and a timeless understanding that life and death are intimately connected. The Ouroboros signifies that energy never dies, it only changes. It is life, death and re-birth in a constant state of renewal.

The Magician is the Number 1 representing unity and a state of oneness with the universe. He is also ‘at one’ with himself. He is the knowledge that the mind must be a servant to desire. Ruled by Mercury, the Magician is fleet of foot and has many tricks up his sleeve! He may surprise and delight you but he also might twist and turn like a slippery eel. Typically when the Magician appears, we know that something special is about to happen. What was impossible now becomes possible. The Magician doesn’t follow earthly rules aside from those that honour life and therefore isn’t limited or restricted.

When the Magician appears in a reading, he is a reminder that there is magic within you. By mastering your thoughts, you too can create the life you desire on earth. Magic however is also a great responsibility which cannot be entered into lightly, hence the serious, focused gaze of the Magician. Despite his youth, he is master of ancient wisdom. This is perhaps captured by the altar which I always imagine to be made of oak.

When the Magician appears in your reading, you have opportunities open to you. Everything you need is at hand. Now it is just a matter of picking up the right instrument for the task. The Magician may be there to remind you that the way ahead is clear. In an advisory capacity, he shows you that you can move forward if you choose. The Magician says that you that you are able to find creative solutions to problems.

Perhaps you have been distracted recently or unable to focus. If this is the case, then like the Magician, you need to master your mind. With the infinity sign above him, he reminds you that all your thoughts ripple out into the universe. It is time to become clearly aware of the signals you are sending and whether these correlate to the spell you wish to cast/the path you hope to take. Remove the extraneous noise of life, conquer your inner chatter and focus on the task at hand. Magicians are often known for their words of power; for example, abracadabra! This card may be a subtle reminder to be aware of the thoughts you voice as well as those you just think. Words have power.

When the Magician is reversed, trickster energy may be at work. Things aren’t as they seem. It can be like being under the spell of someone else, unable to see the reality. Caution is advised before making any decisions. Here Mercury is slippery tongued, perhaps telling you what you want to hear in an attempt to get their own way. He may be charming, but he isn’t trustworthy. Be sure of the facts before you sign on the dotted line.

It may be that you have skills that you aren’t using. Perhaps there is something you do effortlessly that you don’t consider to be a talent yet others are amazed by your ability. Perhaps you cannot decide which action to take or which tool is the best for the job. Maybe you simply have too many options. Perhaps that is something you do well but have left behind for other reasons. The Magician urges you to live your full potential, using the skills and talents you were born with.

You may be living with your head in the clouds, endlessly going over the possibilities but never taking action. You may be seeking magic in the wrong places. Remember the magic is within you!

Affirmation
I am conscious of the power of my thoughts.

Keywords and phrases
Upright – A time for magic, control your thoughts, mental strength, aptitude, opportunities abound, use your skills, focus, concentration, intention, thoughts made manifest, spell-casting, abracadabra, open sesame! Conjuring something from nothing, the impossible made possible, the opener of ways, mind over matter, using your initiative, acting on the moment, focus brings growth, unrivalled skill, the art of persuasion.

Image – The Magician from The Rider Waite Deck