Card Description
A young man dressed in a flamboyant shirt, leggings and boots stands poised on the edge of a cliff. A feathered plume is set upon his cap. His head is pointed to the sky and his forward momentum suggests he will step right of the cliff. In his right hand he supports a staff that carries his satchel. In his left hand he carries a white rose. At his feet a white dog leaps playfully. In the top right hand corner the sun is shining. The sky is painted yellow to reflect the brilliance of the sun. In the distance behind him we see jagged icy mountains. 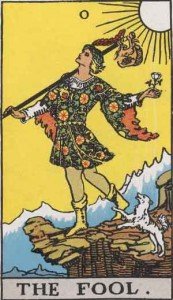 The Fool is the beginning of the Tarot so he signifies beginnings. He is the heady rush of optimism, the daring first step. The Fool looks up to the sky suggesting that he guided by a higher power, the Sun blazing in the right hand corner suggests a feeling of optimism when looking to the future. The small white dog at his feet represents trust and being loyal to oneself.

There is a strong sense of freedom. The Fool carries only a small satchel. He has chosen to leave the baggage of the past behind, taking only what is essential. It may be that as he is young, he hasn’t had the emotional experience to accumulate any psychological baggage. The staff in his right hand like the wands in the tarot represents faith, courage and will. The white rose in his left hand suggests he is at peace with the past. In the language of flowers, the white rose depicts purity and innocence.

The Fool is full of optimism because he is young, wild and free. He is your last day at school, first day at college and the day you move out of the hotel of Mum and Dad.

The Fool often shows up in a reading when the Querant is starting a new path, one which they have most likely instigated. It is often accompanied by a feeling of joy and excitement, a willingness just to venture into the unknown and see what happens. It can be there when you take a chance on something you perhaps never considered before. The Fool can herald a moment when you just say ‘I’m going to go for it!

As the Fool steps out, he doesn’t see the edge of the cliff, he’s focused on the road ahead. With the feathered plume touching the sky, he’s perhaps dreaming of all the adventures he might have a long the way. We may see him as ‘foolish’ but he’s following his heart’s desire. In a reading it can suggest letting go of worry and concern and taking a risk.

In time’s past, the Fool or the Court Jester was the one person in the court who didn’t have to adhere to the rules. They could speak freely in jest and sometimes offer wisdom to the King through their Tom foolery. The Fool could raise issues that needed to be attended to and could poke fun at issues in society that made people question and comment – much like a clever comedian does in this day and age.

A quote by William Faulkner raises an interesting issue

“The artist is still a little like the old court jester. He’s supposed to speak his vicious paradoxes with some sense in them, but he isn’t part of whatever the fabric is that makes a nation.”

Zero is a circle of completion, unity and togetherness. he is the divine connection yet also a unique individual (shown through his association with Uranus).

If the Fool shows up in a reading to a “should I or shouldn’t I” question, he is there to say follow your heart wherever it may lead. There may be an innocence, a naivety even about what is to come and the consequences of such actions but through child-like trust we are carried forward on our journey.

The Fool and the Devil
Depending of surrounding cards and/or intuition this can relate to either making a significant mistake (being lead by madness) or alternatively can indicate that the way through your fears is to learn to trust yourself again.

The Fool and the Eight of Cups
Being the one to end a relationship and walk away.

The Fool and the Ace of Pentacles
An offer of a new career that will involve significant retraining.
Note – I often find the Fool comes up to show a university or college course.

The Fool and the Six of Swords/Chariot
Hitch-hiking

The Fool and Seven of Cups
Fool’s paradise

The Fool and the Star
Absolute trust in a higher power

The Fool and the Magician (either one or both reversed)
Trickery, sleight of hand.

Reversed
When the Fool is reversed all the more tradition meanings tend to come into play. Perhaps the Querant is in over his head after making a foolish mistake. one may be about to make take an unnecessary risk, leap without looking or bank everything on a childish whim. Taking a small bag on a long journey may suggest not thinking through the practicalities. The Fool reversed can show up when we are doubting ourselves too much, not trusting enough and unwilling to open a potential new door. With the Fools head at the bottom of the card, the phrase ‘sticking your head in the sand ‘ may come into play! Recklessness and immaturity can rock the boat more than is anticipated.

Affirmations
I am open to new experiences
I trust

Image – The Fool from The Rider Waite deck