New Moon in Aquarius gives you a chance to distance yourself from day to day challenges and get a glimpse of the bigger picture. During this lunation, spend some time considering whether you are headed in the right direction. Are you keeping your goals in sight? Aquarius is about making wider connections, hunting out like-minded folk and getting actively involved with the wider world. Who do you need to connect with? This Moon reminds you that you are not alone and you have a place within society as a whole.

The New Moon is square the last November solar eclipse and the North Node in the lunation chart will be conjunct the previous eclipse point- thanks to the lovely Nika over at Lua’s Facebook page for the head’s up on that one!

The last solar eclipse was quite challenging, so with the eclipse point activated, issues that were occurring during that time may be triggered by this New Moon. Think back to what you were experiencing then and look at what you have learned about yourself since then. Recognise how things seem different when you have some distance on them. It is all part of the karmic path. 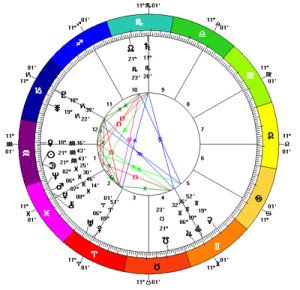 Uranus is ruler of this Aquarius Moon. The semi-square gives this chart an edgy, unpredictable feel. Combined with the previous eclipse point, there may be surprises, sudden blocks and unanticipated turns of events. This isn’t all bad. The semi-square pushes you to make the best of what you have and promises that it will fortify you for things to come.

Less than an hour after the new moon occurs, a square between Mars and Jupiter perfects which again hints at issues being apt to blow out of proportion. It’s blowing your balloon up too fast, wanting it to be bigger than everyone else’s – POP!

Mars is ruling over headstrong Uranus at the moment as well, so this little power play could have some people running in confusing circles as Mars suddenly realises he’s in hot water and doesn’t know how to swim. Uranus however is in a nice tight sextile to Jupiter so opportunities abound here to really raise your vibration. If things are just so up in the air that you are getting frustrated, imagine yourself in 3 months time. See yourself resolving any problems you are currently experiencing. Imagine yourself in the future looking back at you now and reflecting on the steps you took to resolve problems and move forwards. This exercise may help you to come up with some sparkly solutions to anything you are currently worrying about. Uranus, even in an edgy mood, can still bring flashes of insight.

whose name means ‘auspicious one’ and is considered to be ‘The Destroyer’ and ‘The Transformer’.

The difficulty is that when you go out into the big bad world, your experience with others changes your self-awareness. Most often we interpret this as ‘they made me feel this that or the other’ but most often these are projections of our own mental constructs. Your interactions with the world are shaping you, encouraging you to question and come to a better understanding of both yourself and others. Sometimes, people push us to change – to shift into a new level of understanding and we don’t want to. We hang on like grim death to who we are think we are because we think we are what we think! It’s easy to identify so much with what we think that we lose a sense of who we really are…

And so we become afraid of being ‘destroyed’ when in fact we are being transformed.

The New Moon is also trine Ceres. You can bet your bottom dollar that this lunation will give you food for thought…

The Sabian Picture
The New Moon is on the Sabian symbol :-

This rather lovely symbol provides a wonderful clue to this Moon and ties in the trine to Ceres. Consider what you need to make you feel comfortable enough to be able to play with the possibilities of your life. How can you nourish and nurture yourself better to allow yourself the chance to change? The trick is to make yourself safe enough to explore the big wide world without making it so safe you are too afraid to leave. In practical terms, you might want to create a nest egg or strengthen your ties with friends and family in order to give yourself a support network.

It’s true that sometimes Aquarius can be obstinate just like a small child saying no, no, no just because they can. Uranus will sometimes dig his heels in just because…! But if you are open to the changes happening around you, there is the bright glimmer of possibility pulling you out of your comfort zone. When you are open to change, rather than having the rug pulled from under your feet, the surprises that Uranus can bring can be like a magic carpet whisking you away to exciting adventures. Don’t forget that Saturn is the co-ruler of Aquarius. Currently in Scorpio he quietly seems to say, if you see something glittering – keep digging. You may have just struck gold.

Questions and Reflections for the New Moon
Are you prepared for change?
Who are the like minded-folk you need to seek out?
What makes you feel safe enough to explore?
What ‘food for thought’ have you been given recently?
What possibilities have you been considering?
What do you think about yourself? Is it true?
Who or what pushes you to change your thinking?
What have you learned recently that changed your perspective?
Do something different to get a different result.
When you imagine the future, what do you see?

Thanks to the following Deviantart.com artists :-
Large rectangle carpet rug by madetobeunique
Girls Everywhere 17 by Falln-Stock
Shiva Nataraja by EveLivesey