Vesta was discovered by Heinrich Wilhelm Olbers on the 29th March 1807 in Bremen and named by astronomer friend Carl Friedrich Gauss who helped to calculate Vesta’s orbit. Vesta is the 3rd largest asteroid after Ceres and Pallas and the 4th to be discovered (hence its number 4). The symbol of Vesta used in astrology was designed by Gauss and indicates the altar of Vesta and its sacred fire.
The symbol we use now is slightly different from the original however the meaning behind it is the same.

Out of interest, Olbers is the man behind ‘Olbers paradox’ which suggests that because the sky is dark at night, this indicates that the universe is finite. Olbers postulated that if the universe was infinite and without beginning or end, the light from billions of stars would have reached us by now which would cause the sky to be light at night. Whilst there are other theories which challenge this, it remains a rather fascinating connection to Vesta as she represents the light of sacred fire. According to some Aborigine beliefs, the stars are the burning campfires of those who have passed over to the other side.

Vesta’s Story
Vesta was a Roman Goddess often likened to the Greek Goddess Hestia. However Vesta seems to have little in the way of personal mythology. Much like the Greek tale of Chronus and Rhea, in Roman myth, Saturn swallowed his children in an attempt to stop them from overthrowing him. His wife tricked him into swallowing a stone giving Jupiter the chance to be born. Jupiter overthrew his father and released his brothers and sisters; namely, Juno, Ceres, Pluto, Neptune and Vesta. When asked what she would like with her freedom, Vesta only required her continued purity and turned down all offers of marriage.

The only other tale of Vesta concerns Priupus, a rather naughty God by all accounts. Priapus spied Vesta sleeping one evening and took a fancy to her. He tried to creep up on her with the intent on having his wicked way but the bray of a donkey alerted Vesta, protecting her from assault. For this reason, the donkey is an animal sacred to Vesta.

Initially Vesta was worshiped in the homes of the common people as the Goddess of the Hearth fire but over time she grew in status. Eventually she was honoured in a temple built to house the sacred flame of Rome. The flame itself was tended at all times by Vestal Virgins rather like the perpetual flame of St Brigit in Kildare, Ireland. In Rome, the job of tending the fire was taken very seriously as people believed that something terrible would befall their city if the fire was allowed to die. The fire represented the spiritual heart of Rome. On March 1st each year, the fire was ceremonially renewed. Vestalia, Vesta’s sacred festival, was celebrated between the 7th – 15th June. It was only during these times that her normally closed inner chamber was opened to woman who would bring offerings to her.

The Vestal Virgins who tended the sacred flame were chosen before puberty and took a vow of chastity for 30 years. It was essential that they remained untouched and pure. Those who were found to have dallied were buried alive. The Vestal Virgins were priestesses considered to have very high status not normally accorded to women. Unlike other women, they did not belong to their Father or to a husband. Vesta’s temple was also different from other temples to the Gods. It was round rather than square and didn’t contain a statue to represent her. It was considered that she was one with the flame.

“Conceive of Vesta as naught but the living flame” Ovid

Aside from tending the sacred flame, the Vestal Virgins were also charged with keeping secret important documents (such as political treaties) and wills. There is some suggestion that they also looked after a sacred relic called a fascinus which was a representation of a phallus. Kept at the burning heart of the internal chamber, we can begin to see how Vesta was once connected with sacred sexuality. The fascinus was said to ward off the ‘evil eye’.

“She’s truly a virgin, who neither accepts seed nor yields it, and she loves virgin companions.” Ovid

Whilst their regime was strict, they were also generously compensated for their service. They also held a curious privilege in that they could release by touch a criminal being led to punishment – as long as the meeting was seen as accidental.

The Discovery Chart
I have not been able to locate a discovery time for Vesta, so I chose an arbitrary time of 1am to set the chart. Therefore I am ignoring the house position of the planets and the angles. 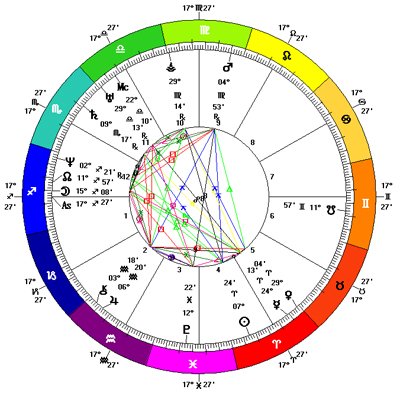 Firstly, we see that Vesta was discovered in the anaretic degree of Virgo. Often anaretic degrees intensify the sign attributes. I have likened it to the moment of death where suddenly every aspect of life to the smallest degree becomes incredibly vivid. Anaretic degrees are like the swan songs of the zodiac, singing louder and more beautiful than at any other time. The difficulty with them is that they can be so intense. The sworn dedication to service by the Vestal Virgins can be seen in this powerful degree symbolism.

The closest aspects to Vesta are a semi-sextile from Uranus and a quincunx from Venus. These two aspects seem to suggest the freedom offered to the Vestal Virgins yet also the cost to their sexual selves. Nevertheless, with Vesta in a quintile to the North Node, we see how she can indicate a special skill which involves a strong sense of purpose. Although the Moon may have been a few degrees closer or further apart from the North Node, part of me is struck by the symbolism of the North Node nestling between the Moon and Neptune. This is about the purpose (North Node) of the divine (Neptune) feminine (Moon). All three are in the visionary fire sign Sagittarius!

A triseptile from Mercury perhaps indicates the spiritualised mind (Septiles are considered to have a mystical connection).

Vesta is opposite the Sun which is fitting for focusing on ones own inner light. The Vestal Virgins seemed to cast off their own identity in order to take on their sacred duty. This aspect also alludes to their physical distance from men.

Neptune adds a further spiritual overtone in a sextile to Vesta. Whilst normally I work with very tight orbs with asteroids, I am allowing for this, as Neptune has much to do with the dissolving of boundaries, sacrifice and spiritual service.

The Sabian symbol for Vesta’s discovery degree is uncannily apt! Dane Rhudyar’s keynote for this degree is “The total concentration required for reaching any spiritual goal.” This symbol needs little by way of explanation as it serves as a vivid connection to the role of the Vestal Virgins and Vesta herself in the chart. Vesta’s primary goal therefore, is to focus to achieve her task, whatever that may be, without distraction.

Vesta in the Astrological Chart
The sacred fire is an ancient symbol for sexuality – the burning passion of sexual desire and its resulting fecundity. In times past, the abundance of the Earth born of fertility was essential to life as was the proliferation of the human species. Whilst there are certainly overtones of sacred sex linked to Vesta, I would personally class the more overt practice of sacred sexuality to Hestia who preceded Vesta. With Vesta, sexuality is revered and honoured within oneself but channelled to spiritual service. In this role, she is similar to Christian nuns who ‘marry’ Christ and spiritual practitioners of celibacy. For some, celibacy is considered an essential path to spiritual enlightenment.

Fire in itself represents the divine spark, the essence of all life. Fire keeps us warm, cooks food and gives light. Fire can be used to protect, defend and purify. as I pondered the role of the Vestal Virgins, a poem I used to read as a child floated up from the depths of my mind…

I thought of the Vestal Virgins watching the flame intently and it reminded me of divining by fire. Perhaps the fire also trained these priestesses to see what could not readily be seen – as if seeing into the heart of the divine source.

“She sees all things by her light that never fails.” Ovid

Generally in astrology, Vesta shows where you are devoted to something – a cause, project, person, belief. Vesta indicates where you capable of being utterly focused with a single aim. The house she tenants in your chart often shows the area of life where you take full responsibility and make sacrifices for the greater good. You may be very private about this area of your life simply because it is very important to you and you want to keep it free from impurities from the outside world. Asteroid Vesta suggests where you are dedicated and willing to work hard, putting aside your personal wishes as necessary. Vesta gives you the quiet passion to maintain your focus, always keeping the end goal in sight.

On a more subtle level, Vesta shows were you must keep the inner flame burning and what must be tended to. The house of Vesta is sanctified by her presence. Any perceived wrong-doing which comes under the house concerned is forgiven by Vesta but the price must be to dedicate yourself in her honour. Therefore, sometimes Vesta shows where we may experience much difficulty in an effort to ‘see the light’.

Negative manifestations of Vesta’s energy may include self-absorption to the exclusion of all else, an inability to focus, unwillingness to commit, a sense of being divorced from one’s spirit or mission in life.