Can you feel it? The cosmos feels charged. I feel like the hairs on my arms are trying to reach out to something indefinable yet tangible. It’s like the hour before a thunderstorm or earthquake when I feel oddly excited, slightly anxious and like every fibre of my being is on red-alert. I’m noticing my psychic senses seem super-tuned, my dreams extra-vivid. There’s a shift happening – whether we like it or not.

There’s a new Pope with a renegade edge to his chart, Cyprus is the focus of attention of the crippled banks in Europe and in the UK, a heavy-handed government is cracking down on every scapegoat possible with fists of steel. Feelings about the biggest changes to the benefits system in 50 years range from despair to rage and there is a very real fear that this will have dreadful repercussions.

This Moon is about balance and right now the scales are sorely tipped. Don’t get me wrong, I see people doing incredible things both individually and in groups. Charities and organisations desperately trying to put right huge mistakes made by others. People going out of their way to help others – sometimes having to smash through bureaucracy and put themselves on the line to do so.

When people are oppressed, inevitably they will rise up but these clashes can cause a great deal of pain. In my heart I hope for peaceful resolutions.

Libra is about peace, balance, listening to the other person. Libra is fairness for all, justice and truth. This Moon is pushing for balance yet it is intricately woven within a kaleidoscope of aspects that seem to push and pull in different directions every time I look at it.

In truth, my first thought was ‘duck and cover’ when I first looked at the chart, and that was before I saw the Sabian symbol! But astrology teaches us to work with what we have, to use the energies available to make the best of them. Sticking my head in the sand and wishing it all away is not going to make a difference.

And perhaps that’s the point, the Libra Moon reminds us that we can make a difference by working together. It’s a cardinal sign full of vigour. It tells us to check back in with ourselves to create a balanced approach in our own lives in order to bring balance to the wider community. 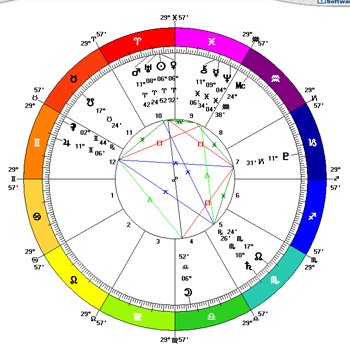 The Aspect Picture
So – here we go. The aspect patterns in the chart are quite extraordinary. The Full Moon herself is opposite Venus, Uranus and Mars who are nestling close to the Sun. This gathering of planets in Aries brings a war-like energy to the chart. A battle for peace ensues. Venus, ruler of the Full Moon is already upset by being in the sign of her detriment so isn’t looking her best and she’s combust the Sun.

Venus is trying to do her job to make everyone feel good about themselves but she’s being outshone. With the antagonised male energy planets nearby, this may bring up issues of equality between men and women.

The Aries stellium says ‘every man for himself’ but we can try to make it work for us by using the energy of Mars and Uranus to push for change. This can be a courageous aspect pattern, fuelled by love if we let it.The Moon also makes a square to Pluto which in turn is bound up in yod with Jupiter and Saturn. The Moon square Pluto needs to take action. Feelings can become obsessions. Everything felt is intensified. On a mundane level this is a crisis for the people who are hungry for change.

On a personal level, it’s about dealing with the demands of the wider world, emotional extremes and powerful needs. If you can relinquish what you don’t need, you can use this energy as a conduit for transformation. Mars however makes a square to Pluto just before the Full Moon is exact and this just adds fuel to the fire. The air is heated.

As I mentioned above, Pluto is involved in a yod pattern. This chart contains not one but two yods – fingers of God pointing in different directions and somehow we must take note of both.

Firstly Pluto sits at the base of one yod along with Saturn in mutual reception. At the apex we have Jupiter. Yods are about adjustment, fate and sometimes sickness. Jupiter is connected to morality, higher learning, the Church, growth and optimism. Jupiter in Gemini is expanding the mind. On the one hand, Jupiter is well placed for the gathering of information. In the age of the internet we are primed for connection which can help us to act as a group and change the moral climate. In another way however, this yod can point to a dangerous preoccupation with wealth with the media intent on distracting us from the real issues. Jupiter also perfects to a square with Chiron on the same day as this lunation so we have further concerns regarding how healthy is our world view? Those who are wounded, hurt or damaged are pushing us to ask bigger questions with wider implications.

On a personal level, this Moon asks you to question what you believe. What is being pointed out to you? What information have you recently discovered that has changed the way you view things? What fundamental structures (Saturn) must you retain and what must change? Jupiter square Chiron asks – what hurt you so much that you stopped believing? 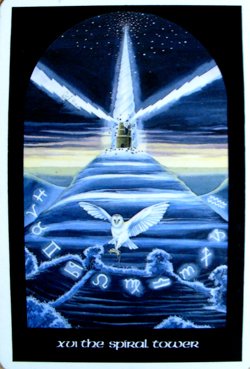 Saturn himself is at the apex of the other yod with Uranus-Mars and Jupiter at it’s base. This yod feels distinctly unstable compared to the other with this Mars-Uranus connection. It could manifest as new discoveries or ways of thinking that push the establishment (Saturn) to shift it’s position. Every time I look at Saturn though, I see the Tower in the Tarot – something is crumbling, foundations are moving. Like the beautiful Tower from the Hallowquest Tarot, perhaps something must fall in order for the spirit to be energised. I note also that Jupiter is still in orb of a square to Neptune. It’s important to stay grounded in reality even when the ground is shaking.

Oddly as I write, I’ve just heard the news that a large library and museum in London is on fire. Libraries are ruled by Jupiter, Museums could be said to fall under both Jupiter (culture) and Saturn (preservation).

On a personal level, there’s the potential of flashes of inspiration that can bring reformation. Your strength lies in your individuality – there’s no one like you in the world! You’re the only one who can…The test is to finish that sentence 🙂

The Asteroid Picture
Asteroid Hygeia is caught up with the Sun so lies opposite the Full Moon. Her name is at the root of the word ‘hygiene’. The health of the people (the Moon) lays firmly in the hands of those with power (the Sun), or so it seems. We may be given a sanitised version of the truth yet there is dirt underneath their fingernails. The task for each of us is to cleanse our own environment, mentally, emotionally and physically in order to clear the way.

A Woman Feeding Chickens And Protecting Them From The Hawks

The Sabian symbol says that whatever happens, we need to care for those around us. The children still need to be fed, the sick cared for, the food prepared. When all hell is breaking loose around us, we can find our way through by simply doing what needs to be done and caring for those who cannot care for themselves. With the Moon square to Pluto and Pluto square Mars, this is fierce protection, like that of she-bear defending her cubs to the death.

On a more subtle level, this Sabian urges you to protect the things you want to do with your life – your personal projects are your chicks. All of us have a reason for being here and it is vital to stick with your responsibilities when the going gets tough. Nourish your life rather than feeding your fears.

There is another sneakier side to this Sabian however. It could represent those who insist they have ‘our best interests at heart’ yet the over-protective edge keeps those ‘under their wing’ in their place. This image gives us food for thought and tips us back to the scales of Libra. Pluto is a little suspicious that perhaps not everything is as it seems.

There’s no doubt that there are some volatile aspects in this lunation but as always it’s about how we use the energy available. We can either blindly accept what we are told or investigate further. We can choose the truth or live a lie. The Moon’s trine to Jupiter asks that we have a little more faith in each other. We can make the best of what we have or kick it down and start again. We can be at war with each other or we can work towards peace. These are the choices that must be weighed against the lightness of our souls. These are the decisions that will govern the future of our children. Seek out truth in the roar of the battle for this will be your sanctuary.

Images courtesy of
Nebula M1-67 around Star WR124 – Hubble.net
The Tower – From The Arthurian Tarot by Caitlin and John Matthews

Want to know how these powerful lunation aspects may affect you? Check out my readings page…