I’m starting a new weekly astrology column, a little different from the Cosmic Tides, as a round up of the week ahead and to give you a head’s up on what to look for and what to make the most of.

The skies are still extremely busy after the feisty Full Moon last week. In that post, I noted that I kept seeing The Tower when writing about one of the yods present in the chart. Oddly, I noticed in the news that The Eiffel Tower in France was evacuated on Saturday after a terrorist threat. Presumably it was significant enough to clear the site of over a thousand people. Taking a quick look at the chart of France with the last Full Moon chart around it sees the Sun, Mars, Venus, Uranus stellium in the 12th house of hidden enemies. All are square to the Midheaven which is the ‘highest point’ in the chart. The MC can also stand for something that France is known for much like the MC in a natal chart is often our public self and what we aspire to. The Eiffel tower is about as iconic as you can get and the most recognisable structure (Midheaven in Capricon) in France. 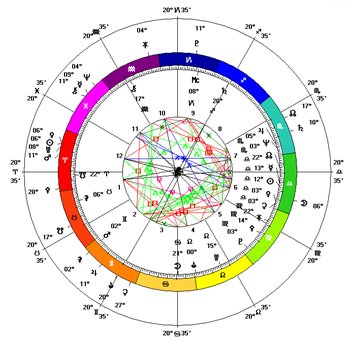 Looking forward into this week, a sultry last quarter Moon occurs on the 3rd April conjunct Pluto. There’s a feeling of grit your teeth and just get on with it. What you are working on now has lasting effects so don’t let your temper or fears get in the way of good things to come.

The big news of the week is that the ongoing sextile between Pluto and Chiron becomes exact again on the 4th April. This is a long-running dance between these two which will take until 2016 to complete. During that time, we have a chance of healing some very deep wounds and making very powerful changes – but the sextile says that it’s just an opportunity. It’s up to each one of us to take it.

Chiron is the stress relief in the current Uranus square Pluto story. Think of him as mediator between the two. Sure he’s old and has a limp but his eyes brighten when Uranus tells him wild stories. Chiron was a bit of a renegade himself! Pluto who sure as HELL isn’t going to give an inch to Uranus can however listen to Chiron. He doesn’t feel threatened by him and Chiron doesn’t dig up trouble. Instead Chiron talks about peace and healing a lot which calms Pluto down a bit and makes him think of different ways to change things.

Also on the 4th April, Ceres moves into Cancer bringing a strong maternal feel and also a focus on home grown foods. With the UK still in horror of horsemeat found in beef products and continuing investigations turning our stomachs, Ceres in this sign may force us to look at what we are feeding ourselves and our children. On a personal level, eat consciously and focus on the foods that nurture your system.

Meanwhile, the antagonistic quincunx between Jupiter and Saturn ebbs away, dissolving the two finger of God patterns in the skies. Black Moon Lilith however is headed in Jupiter’s direction to create a conjunction on the 6th April. My feeling is, with the many nasty stories of horrendous treatment of women in various parts of the world that there could be an escalation of these issues. Lilith isn’t one to lie back and take it and with Jupiter in Gemini it’s like she’s screaming out through the headlines. Amina Tyler, the topless Tunisian protester wrote words on her body to protest against the treatment of women in her country and many others have followed suit to support her (note, strong language and semi-nudity).

The uprising of Lilith is being played against a backdrop of belief systems. Jupiter stands for the Church and religion which is kind of ironic considering he was a wandering rover with an eye for the ladies in Greek mythology. Monogamy wasn’t his strong point! Lilith and Jupiter have to find a way to work together to channel all the sexual energy, otherwise someone is going to try to lay down the law to everyone else and that’s when this energy can get out of hand. With Pluto making a quincunx to Black Moon Lilith on the same day, this energy could prove explosive. On a personal level, this may manifest as a need to battle your demons to get down to what really matters. Mercury flies out of the shadow zone from the last retrograde on the same day as Lilith and Jupiter are conjunct so the lines of communication are open if nothing else.

But still, let’s look on the bright side because the week ends with a conjunction between Venus and Mars on the 7th April. It’s all going a little lovey dovey. Tensions now can be relieved the old fashioned way. It’s a bit fast and furious, wham bam, thank you ma’am with the conjunction occurring in Aries but sometimes that’s all you need to shake off stress. On another level, use the Venus-Mars conjunction to bring together your inner male and female, your anima and animus, your yin and yang. Ultimately it’s a passionate and creative aspect which can drive you onwards and upwards.