The Aries New Moon is ripe for planting the seeds of future endeavours. Whilst in the UK we are still shivering after the coldest Easter in 50 years, the clocks have gone forwards, Summer has (apparently) arrived and we too must speed up. This is the first heat, grass cracking through the pavement, birds nesting and a fiery thrill of energy that says I can DO this! Take the initiative and sow the seeds of intent. This Moon is action orientated. 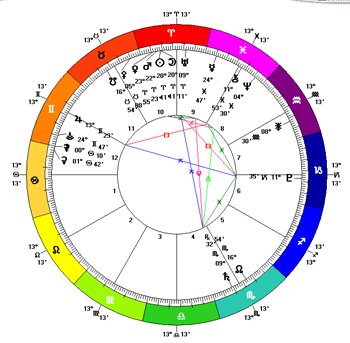 The Aspect Picture
The difficulty with this New Moon however is that it’s rather like having all your eggs in one basket with a stellium in Aries. The New Moon is conjunct Venus and Mars and although Uranus is out of orb to a conjunction, he’s still part of the picture.

This stellium feels very fertile with Venus and Mars conjunct but there’s an impulsive edge that suggests you may need to do some weeding out a little later down the line. A semi-square to Neptune puts you on notice that not all of your ideas may be grounded in reality and not all of your seeds will take.

But then again, sometimes you need to just throw all you have at it just to see how it turns out. Mars as ruler of this Moon is utterly at home in this hedonistic ‘go get ’em mood’ and with Venus there, he’s more able to persuade others into doing what he wants rather than beating them over the head about it – if he chooses to that is.

The Asteroid Picture
The problem is that Mars is conjunct Eris shortly before the New Moon which brings a compulsive, competitive edge to this lunation. It’s every man for himself if this position. I’m hoping that Venus can appease this a little but it’s wise to watch for someone trying to upset the apple-cart just because you want to do what you want to do. Alternatively, it may be you who’s frustrated by someone else’s pig-headed attitude and you might feel like throwing the towel in. The advice is to hold your ground if you can – and retreat if necessary. Sometimes you just have to live to fight another day.

A Pugilist Enters The Ring

This symbol emphasises the strong Martian energy of this lunation. This gives a fighting spirit, a willingness to enter the fray and confidence in your strengths and abilities. The only negative side (especially with Eris in the mix) is you need to know how to pick your battles. It’s no use stepping up if you are a bantam weight and your opponent is a heavy-weight.

If this Moon seems to be pushing you around even though you’re in a fighting spirit, use the energy available to work on your strengths and also identify your weaknesses. Nobody likes to admit they feel weak but once you identify what exactly that weakness is, you know what you need to work on. Aim towards a positive, confident, assertive manner that comes from being completely in tune with yourself. Brash confidence sometimes has its place, as does winging it, but you will be better prepared for the fight by being strong within yourself.

Questions and Reflections for the New Moon
What are your greatest strengths
Where are you ‘gaining muscle’
What are your weaknesses?
How can you turn your weakness into strength?
What are you fighting for?
Are you putting all your eggs in one basket?
What do you want to start?
What action do you need to take today?