Even though the skies seem a little calmer than they were, they certainly aren’t quiet – not with Mars issuing war cries left, right and centre. There’s an altogether fiery tone which is heating the air around us. I began writing this on the 2nd April and have noticed during the week, the build up of ‘war cries’ coming from Kim Jong-un.

In 1699 the tenth guru, Guru Gobind Singh, chose Vaisakhi as the occasion to transform the Sikhs into a family of soldier saints, known as the Khalsa Panth. Quote from BBC Religion pages

The guru carried a great sword. In front of a crowd he shouted “Is there a devoted Sikh who will give his head to me here and now?. One by one, five men entered the tent of the Guru. After each entered, the Guru appeared outside with a bloodied sword. After the 5th man had disappeared, the crowd were obviously quite concerned! Eventually however, the Guru came out of the tent with all five men safe and sound. They become ‘the beloved five’ of the Sikhs and the first men of the Khalsa Sikh community. 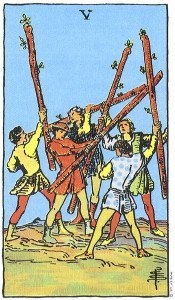 Five is a magical number. Five is the pentagram and the perfection of Da Vinci’s Vitruvian Man. You see the magic in your hands and feet, in the five perfect fingers and five perfect toes of a newborn. Five is repeated throughout nature, in petals and snowflakes. Five in the Minor Arcana of the tarot however typically connects to conflict and competition. It is through conflict that you come to know your strengths. When you know your strengths, you can be brave and fight for what you want in life.

Strength is a concept to examine this week. On the 8th April, the Sun visits asteroid Lucifer. As I said in my article on Lucifer “If you can squarely face the dark, then Lucifer will bring you the light. By facing the things you most fear, he illuminates the darkest places in your psyche.”

Knowing your fears gives you strength and this sets the tone for the week.

On the 10th of April the New Moon creates a conjunction to both Mars (in his ruling sign) and Venus. I wrote all about the New Moon here but suffice is to say that this Moon is about knowing when to fight and when to back off. This lunation is likely to offer you the chance to step up, take a hit or throw a punch (metaphorically speaking please!) and generally gives you an idea on how you handle yourself when conflicts ensues; even that which rages inside yourself. True strength comes from facing your fears and embracing your own power – being at one with it.

And this takes us to Pluto who on the 12th April will turn retrograde, giving you a chance to switch off the noise and go within to question where exactly your power lies. It may be in the way you love, the way you learn, the way you work. It may be in what you create. Look to the house that Pluto is transiting because this is where you have perhaps lost power and need to regain some ground. Pluto will help you to recharge your batteries.

Finally on the 14th April, Mercury joins the rest of the gang for a party at Aries house. He won’t get a chance to sweet talk Venus though as she’s halfway out the door on the way round to the neighbours. Mercury in Aries however does help bring you up to speed and more able to deal with the combative edge to the cosmic energy.

In Aries, Mercury also reminds you to think about what makes you feel young and free. Often as we become older, we have more to lose and therefore take less risks. Mercury jumping into the fray may see you considering the crazy old days of youth and thinking about whether or not you are ready for a new challenge to stretch your mind.