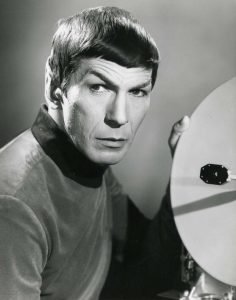 I’ll admit it, I’m a sci-fi junkie. Ever since I was a little girl, I have been fascinated with space travel. My great-uncle worked at the Kennedy Space centre and would often send me newspaper clips and souvenirs. I devoured every single sci-fi series in rapt silence, shushing anyone who dared to speak during the show. Star Trek, Dr. Who (Tom Baker was my doctor), Space 1999 (I wanted to be Maya!), Blake’s 7, Battlestar Galactica, Logan’s Run, Mork and Mindy… If it had aliens and space travel, I had to watch it.

Star Trekkin’ across the universe…
Still pretty much obsessed with sci-fi and fantasy, my own writing (and reading) has always favoured these genres. The charts of writers are often quite fascinating. The natal astrological symbolism often spills through into their characters sometimes voicing aspects within the chart. For a little bit of fun as the new Star Trek movie release date draws near, I thought I would take a look at the chart of Star Trek writer and creator Gene Roddenberry. 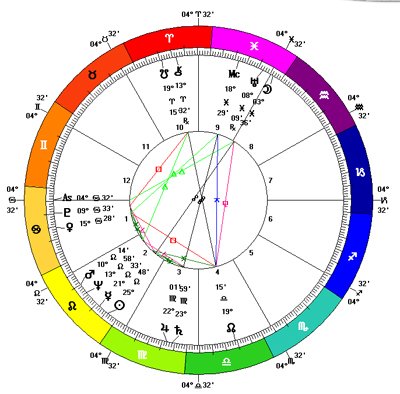 It’s life, Jim, but not as we know it…
Cancer on Roddenberry’s Ascendant is indicative of this affectionate man who is fondly remembered for giving great big hugs. Pluto (conjunct the Ascendant) along with Venus, quickly gives a picture of someone who had the tenacity and the determination to transform his own life as well as lending itself to the cult status that he enjoyed with the birth of Star Trek. Initially staying close to his roots, he became police officer (Pluto = crime) before turning to writing.

There’s Klingons on the starboard bow…
Ruling planet the Moon, lies close to the edge of the 8th house in Pisces indicating an emotional understanding of deep psychological motivations which would have helped him as a policeman and as a writer. The Moon however is conjunct Uranus in the 9th house and here’s where it becomes quite fascinating. Uranus feeds not only to his ruling Moon but also back to Pluto and Venus in the first.

Uranus is considered to be the higher octave of Mercury and the 9th house is associated with overseas travel, communication through symbolism (as opposed to words in the 3rd house) and broadening the mind. It is the house of the visionary. Note that Neptune, ruler of Pisces and dispositer of both the Moon and Uranus is conjunct Mercury. These iconic words float back to me…

Space – the final frontier…These are the voyages of the Starship Enterprise. Its five year mission… to boldly go where no man has gone before.

It is perhaps within this Moon-Uranus conjunction that Mr. Spock was born. He belongs to an alien race, one closely related to humans yet they have developed the ability to switch off their emotions and deal with life in a coldly rational way. Uranus conjunct the Moon is associated primarily with emotional detachment.

Uranus of course is also noted to be the planet of invention. It is future orientated and futuristic so no wonder then that Roddenberry created a story far in the future with a the teleport system (‘beam me up Scotty!’) as a way of moving his characters easily from one place to another.

Ah! We come in peace, shoot to kill…
Roddenberry developed the idea of Star Trek so that he could “deal with important issues such as sex, religion, and union-management without upsetting the network.“. In effect, Gene peacefully raised cultural issues in an innovative way. The prime directive of Starfleet is that they cannot interfere with the social development of any alien race they encounter. This natural urge towards peaceful co-existence is a manifestation of the Moon-Uranus conjunction in Pisces. When Star Trek began in the 1960’s, it was revolutionary that he chose to have a multi-racial cast and an ultimate agenda towards peace in a divisive, warring climate. Whilst Roddenberry had no planets in air signs, his North Node in Libra spoke through his urge towards equality for all. With the North Node conjunct asteroid Astraea (Star Maiden) who left earth to dwell within the stars because she couldn’t bear the injustices upon Earth, once again we see how the astrological symbolism plays out.

Roddenberry’s deep understanding of our psychological roots helped him to create a world where we can battle our shadows. In this case, the shadows (Pluto) that threaten to disempower our society, were moulded into aliens. Often wearing recognisably human faces, the various aliens could bring up the issues that Roddenberry was concerned about in an acceptable way. For example, Mr. Spock’s people (the Vulcans) have incredibly powerful emotions (Moon in Pisces) which threaten to violently overwhelm them (Moon ruler Neptune conjunct Mars in Leo – perhaps with a dash of Pluto in Cancer conjunct the Ascendant thrown in!). As a result, they have learned through intense self-discipline (Mars semi-square Saturn) to detach from their emotional selves (Uranus conjunct the Moon). In the Star Trek mythology, Vulcans saved the people of Earth after World War 3 had almost obliterated us by eliminating poverty, disease and suffering – all Piscean issues.

Ye cannot change the laws of physics…
Back down in writer’s corner in the 3rd house, Roddenberry had a fabulous Jupiter-Saturn conjunction. This shows he had the discipline to put pen to paper and that he most likely enjoyed the process of developing his stories. Given the proliferation of books and websites which list every aspect of back-story, this configuration in the chart shows his careful appreciation to detail in character development and plot-lines. Both Saturn and Jupiter are conjunct the IC giving him the deep-down belief and attitude to create a long running story that manifested through both the small and big screen.

“You know, there are some words I’ve known since I was a schoolboy: ‘ With the first link, the chain is forged. The first speech censured, the first thought forbidden, the first freedom denied, chains us all irrevocably.’ Jupiter conjunct Saturn in Virgo

It’s worse than that, he’s dead, Jim, dead, Jim, dead, Jim…
With the Sun shining brightly in Leo in a packed 2nd house, Roddenberry had a gift for drama which not only made him money but also created heroes who could fight our own imaginary demons. Neptune dispositing the Moon and ruling the 9th gave him a hunger to create imaginative, archetypal stories.

Captain Kirk himself was Starfleet’s youngest Captain (Sun conjunct Mercury), given to occasionally bending the rules of Starfleet command when he thinks it necessary (Sun in Leo semi-sextile Saturn). In opposition to the Moon, Kirk was pretty much led by gut instinct to action which occasionally Mr Spock had to curb (back to Uranus conjunct the Moon).

“It isn’t all over; everything has not been invented; the human adventure is just beginning.” Uranus in the 9th House trine Pluto

Only going forward, still can’t find reverse.
Chiron in Aries in the 10th house is in an interesting position trine both Mars and Neptune and square Pluto and Venus. Chiron in the 10th indicates that Roddenberry’s success came not without struggle. Star Trek was initially cancelled after dismal ratings but a core following revived the show. Even once the show was revived, it as not without difficulties. Eventually, after the first movie was made and the studio saw its money making potential they “forced Roddenberry to relinquish creative control of future sequels.” Chiron of course, could be the character Bones who was given to a more fatalistic outlook (Chiron square Pluto). ‘Bones’ however are also the jurisdiction of Saturn so it’s interesting that Saturn lies in health-conscious Virgo.

Star Trek Asteroids (yes really!) and their placements in Gene Roddenberry’s chart.
In researching for this post, I discovered that there are several asteroids with Star Trek inspired names not to mention an asteroid named after Gene Roddenberry himself. You gotta love that there’s an asteroid called Mr. Spock! 🙂

The asteroid which really caught my eye is Enterprise which is exactly conjunct Gene Roddenberry’s powerful natal Pluto. How expressive! The ship herself (always referred to in the feminine in the original series) carried our glorious heroes into the blackness of space and on into the unknown to seek out new life (Pluto rules the 5th house). It was to be a journey that would transform Roddenberry’s life and influence generations after it.

“It is the struggle itself that is most important. We must strive to be more than we are. It does not matter that we will not reach our ultimate goal. The effort itself yields its own reward.”
Pluto in Cancer in the 1st House

Star Trek – Into Darkness is released on the 9th May 2013

Whilst writing the post I found myself giggling at this song which was released some years ago. If you are a Star Trek fan, I’m sure you’ll remember…