The lunar eclipse occurs at 04:24 on the 25th May 2013 (UT) at 04SAG08 and this eclipse marks the beginning of Lunar Saros 150. As the Moon only grazes the Earth’s penumbral shadow, it will not be visually perceptible to the human eye.

This lunation is the Full Moon in Sagittarius with added eclipse spice. Sagittarius rules faith, belief, morals, culture. Symbolised by the centaur, this half-man half-beast is torn between two worlds. The world of instinct gives heat and a fiery passion. The world of man, brings the concept of philosophy and a search for meaning. 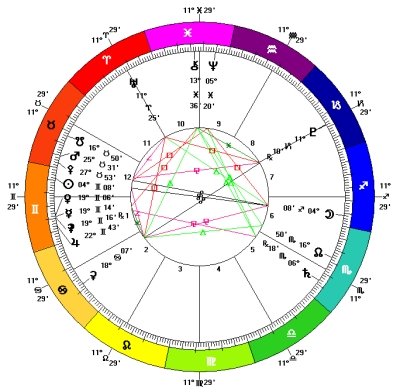 The Aspect Picture
The lunar eclipse is square to Neptune forming a profound connection to higher dimensional knowledge. But the square is tense – no one knows quite what to believe.

With the Moon and Sun in opposition across the Gemini-Sagittarius axis, it’s what you know versus faith. It’s facts and figures compared to the bigger picture. But nobody knows the whole truth, everyone has their own truth – what it yours?

Whilst the eclipse physically is subtle, the psychic effect of it may be strong. Squares to Neptune are deceptive in their power. On the plus side, you can use this energy to meditate upon those things that are confusing you. In fact, it feels much more about giving over to a higher power – that old let go and let God story.

When I look at the chart, I think of that moment in Fringe (oh yes, I love it!) where Olivia first sees a ‘glimmer’ of the other side. Other worlds, other dimensions, other places, all call to your imagination and the real and solid suddenly seems slippery underfoot. This eclipse feels like a ghost passing through your room. By the time your skin starts prickling, it’s already gone – leaving your hair standing on end and a cold shiver up your spine.

But the thing is, it doesn’t have to be scary. The difficulty with this eclipse is that it’s easy to scare yourself when things go going bump in the night. You can however draw on a trine to Uranus who (unlike Neptune who is reduced to a puddle by said spectre) is rather excited by it all! I mean – ghosts, how cool! Uranus of course has all his tech tools available and can figure out in a few minutes whether it was really a ghost or whether in fact your iphone is giving off too much electromagnetic energy. The trine to Uranus is 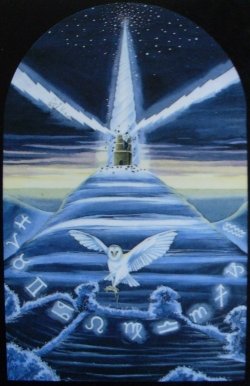 in the background with a wider orb but it does suggest that you can make a choice about whether to be scared silly by your own shadow or whether you decide to get interested in this strange phenomena and treat it like a science project. Don’t forget, Sagittarius loves to study and become an expert. When you put together Neptune, Uranus and a Full eclipse Moon in Sagittarius, you have one big, transcendent, awakening, visionary experience in the offing, even if it does scare you.

It’s natural to be afraid of things you cannot see – not just ghosts but your nebulous unconscious fears. Fear of the future, fear of your dreams when they get weird, fear of people acting out of character, fear of odd thoughts that slip into your mind. And then there’s the bigger things: fear of strangers, fear of being alone, fear of your own demise, fear of never making it, fear of getting lost. And this is where Sagittarius steps in because he’s happy to hot hoof it to a foreign country and get to know the language so that he doesn’t feel a stranger any more in a place where things just seem strange.

Sagittarius simply wants to understand because when you understand something, your fears evaporate.

But there are some things that science (Uranus) has still yet to figure out. We don’t know for sure what lies on the other side, whether aliens exist or whether we go on after death. These ‘answers’ come through personal experience which leads to belief and ultimately faith.

What could be spookier that an owl call in the middle of the night! Religiously used in older horror films, the call of an owl reminds you that you are in the dark. Night has fallen and now your other senses must kick in. The owl is an ancient symbol of wisdom. This eclipse therefore calls to you to find wisdom in the dark. Turn out the lights. Sit alone in a darkened room in the dead of night. Can you do it? Can you be with yourself in the darkness? The owl is like Neptune, reminding you that there are mysteries still yet to be explored and maybe you don’t have all the answers yet.

The Asteroid Picture
The asteroids are quiet in this eclipse but I notice Jupiter is conjunct Echo. Jupiter as ruler of the eclipse is connected to our culture. Sometimes, it seems far easier to fall into the pattern of thinking set by the masses, echoing thoughts like they are your own. But there is another echo – that of your own voice calling from the depths of the soul, singing your way back home. Fall in love with that voice. Find a special place in your heart for it. Much can be forgiven and forgotten by the Neptune square when unconditional love flows and Jupiter can become a blessing in disguise – even if he turns up in a Hallowe’en costume.

Questions and reflections for the lunar eclipse
What is the mystery?
What question can’t you answer?
What do you NEED to know but don’t know?
Do you believe in life after death/ghosts/paranormal phenomena/aliens?
Can you sit in the dark?
What are you most afraid of and why?
Where do you need to go to discover more?
Who can help you along the way?
What is your own personal horror story?
Note down any nightmares during this period – they have much to tell you.
If there was a monster under the bed – what would it be? (play with this one, draw it, collage it, sing it).
How can you become friends with the monster?

Birthdays Affected
If your birthday falls in the following dates, the eclipse will be strongly aspecting your natal Sun.

Any planet or point falling between 3 – 5 degrees of any sign may be triggered by this eclipse. Don’t forget to check the positions of progressed planets and your solar return.