Mercury stations retrograde at 13:07 UT on the 26th June 2013 at 23CAN06. During this year, each Mercury retrograde will occur in a water signs which encourages contemplation on your emotional life. In Cancer, issues connected to your home and family, childhood and emotional history are all brought into the foreground. Life can sometimes be the ‘school of hard knocks’ and consequently you have probably built your own shell to protect yourself and those you love. The question is whether this shell is doing its job or whether it’s restricting you too much. Cancer also relates to how you feed yourself both physically and emotionally. It’s the Mother’s love you did or didn’t have and it’s the instinctive way you defend yourself when you feel threatened.

When Mercury turns retrograde, you tend to hear dire warnings about things getting lost, electrical problems, mechanical breakdown and broken agreements. Whilst these things may occur, the purpose of the retrograde period is to stop you in your tracks so that you can see exactly where it is you are going. Often, a busy life leaves little time for reflection and contemplation so Mercury provides opportunities to do just that to ensure that you are going in the direction you want to be going in. Mercury also gives you time to reconsider decisions and plans and a chance to pause for breath. With the retrograde in Cancer, it could be said that Mercury is giving you time to consider what you are gestating.

Mercury’s function is to make connections. In the first part of the Mercury retrograde you are in the ‘after-thought’ phase. Maybe I should have done this, signed that, said this, made a different decision. As Mercury is as able to fly to hell as he is to heaven, he tends to trigger our internal demons – the ones we tend to push away (or worse, the ones we think we have pushed away but in fact have their foot on the accelerator!). But this is ok. It’s ok to have some thinking time and in this case, thoughts are likely to be felt. It’s important to be really aware of your gut feelings during this phase. 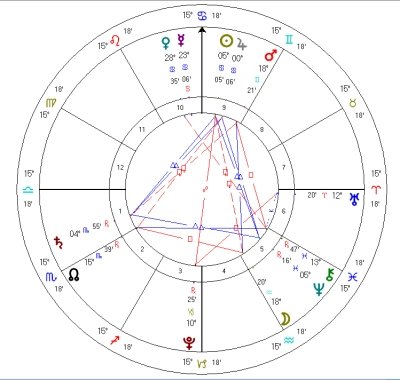 In the Mercury retrograde chart, you can see that the Sun is creating a grand water trine with Saturn and Neptune. It’s the power to make your dreams real people! But Mercury wants you to have a good think about exactly what that dream is. Idealism needs to be married with a healthy dose of realism for the idea to be realised. On the 5th July, Mercury will make a sesquiquadrate to Neptune, an echo of the same transit which occurred on the 17th June whilst Mercury was still in direct motion. This puts you on notice that there is a danger of making decisions that are based on little more than a fantasy. It might feel like the right thing, the only thing to do but caution is advised. Sesquiquadrates have a tendency to go overboard in an effort to make everything feel OK. There’s an air of nostalgia creeping in. There could be a tendency to bemoan the loss of the good old days. The trick is to see things as they are rather than desperately trying to squeeze your feet into a pair of red sequinned shoes and clicking your heels. Wishes are apt to dissolve and that would be a shame because Saturn is offering a helping hand to bring them into being. But they need a little work, a little thought and some good old fashioned gut instinct for knowing when the time is right.

The last aspect Mercury makes in this retrograde cycle is a conjunction to the Sun on the 9th July. This begins a new phase of the Mercury cycle and triggers new ideas and plans and often a sudden push to get going again. Check the house in which this occurs in your natal chart and any aspects this conjunction makes to give you a clue as to what these plans and ideas may be about. The best thing at this stage is to hold that thought. The Sun’s conjunction to Mercury retrograde often gives an intense desire to take action but as Mercury isn’t yet out of the retrograde period, the best way to use this energy is for planning and research if possible. Think before you act is your motto now until Mercury is out of the shadow phase.

This is a fascinating symbol. Who are these characters? If they are unrelated will they begin a new community? Will the woman bare children from both men or just one? Will she choose one, both or neither? Perhaps the two men are a couple.

It could be said that this symbol carries the concept of unity and duality with the woman representing unity and the men, duality. Do we pull together or do we fight? Are the two guys going to fight over one girl like the world wars over Mother Earth?

Dane Rudhyar alludes to this symbol being of mind-body-spirit. However you look at it, there is something that suggests that these three have to find a way to relate, to communicate and essentially to get on (after-all, they are castaways). This symbol then indicates the urge to form bonds both with your inner self (mind, body and spirit) and with those people in the outside world with whom you have a sense of ‘family’.

This brings me to the second idea – perhaps there is something in this symbol about new communities being built by those who are cast away from the main society. The South seas represent the concept of warmth and fire – fire is enthusiasm and vision. In these changing times, new communities are forming from communes to co-operative living. Neighbourhoods are growing food together and people are beginning to help each other now that we know the governments won’t.

I notice that both the Sabians mention North, East and South – what of the West? What indeed. It is the Western world that holds the purse strings. Don’t forget, Cancer is always saving for a rainy day. Perhaps the point is that we need to look in other directions than the West for the answers we are searching for. West is the land of the setting Sun, Tir Na Nog and what is passing out of our lives. What do other cultures have to teach us of the bonds of family, community and what constitutes ‘home’?

As Mercury turns retrograde then, he poses the following questions to ruminate on during the retrograde period.

What community to you belong to?
How do you choose between options?
Who are your family? Are these blood ties or chosen family?
Where do you feel cast out or adrift?
Are you connected to the right people in your life?
How can you balance mind-body-spirit?
Are your feelings reflected in the people closest to you?

Mercury stations direct on the Sabian :-

Rudhyar says that “In occult terminology the north-east is the direction from which spiritual-cosmic forces enter the Earth-sphere”. The North represents death and the darkness and the East represents light and beginnings.

With this symbol pointing midway between these two directions, it is as though the way forward is by facing the dark. You can face the dark if you know the light is coming. The whole image offers a sense of eternal wisdom, timeless mysteries and the kind of serene peace you get when you accept both dark and light inside as well as outside. There is also a subtle hint that this ‘very old man’ may be hovering between life and death – facing unflinchingly the face of death and the possibility of eternal darkness yet trusting that death will simply be another birth.

It’s deep and dark and mysterious and wholly in keeping with the sign of Cancer. Cancer is birth but it is also death.

Combining the symbols, the danger is feeling that you belong nowhere, feeling disconnected from your land, race, family or like minds. You may feel like there’s no place like home or that there’s nowhere that feels like home.

Home is within you – find that and you can be at home anywhere. Make the connection.