On July 29th 2013, we have a very rare and beautiful planetary alignment called a Grand Sextile which coincides with the last quarter Moon. The ongoing summer grand trine forms part of this configuration and altogether we have seven of the major planetary players involved. In the image below, I’ve removed all the other aspects so that you can clearly see the Grand Sextile. 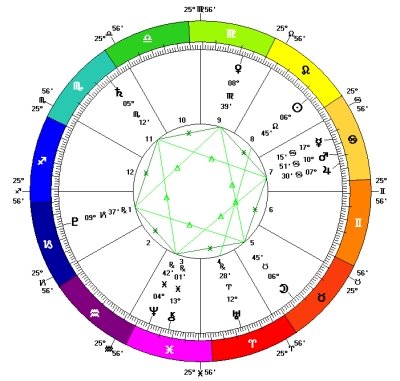 The Aspect Pattern
The Grand Sextile is one of the most complex aspect patterns as well as rare. Looking at it is akin to a game of cat’s cradle where one pattern after another pops out at you the more you look. To get to the specifics, there are 6 trines, 6 sextiles and 3 oppositions contained within the pattern. Look again and you will see two grand trines, one point up, one point down overlapping each other and forming the ‘star’ pattern. Look again and you’ll see 3 mystic rectangles and 6 kites!

In this July configuration all the planets involved are in receptive, feminine signs –

Inherently, trines and sextiles are both considered to be flowing, ‘easy’ aspects and some say that whilst the Grand Sextile is beautiful, it is not necessarily very active. Certainly in the warm, feminine, earthy and watery signs there is something soothing about this aspect but to me it seems to contain the essence of what is possible. With  Water and Earth being the featured elements, this is a aspect pattern that speaks to us on a very human level. We are moulded and shaped from clay and to the Earth we return.

Grand Trine Number 1 – Mars-Jupiter, Saturn, Neptune
This is the Grand Trine which has been the focus of the Summer with social Jupiter and Saturn and transpersonal Neptune taking part. Now personal planet Mars has fired up the position of Jupiter with a conjunction. Mars is often a trigger of patterns – after all, he likes to be in the hot-spot! And he is, as both Jupiter and Mars are opposite Pluto imbuing this grand trine with an intense urge towards change. With Jupiter in the mix, it’s a bit ‘all or nothing’. The trouble with the trine is that it can err on ‘nothing’ without a push.

Grand Trine Number 2 – the Moon, Venus, Pluto
Within this pattern, the Great Mother is at work, the divine feminine calling for a mass shift of consciousness. Venus however is opposite Neptune. This dreamy aspect can fuel us with happy daydreams but the danger here is that the divine feminine can remain separate and indistinct from the real living women that walk the Earth. Venus of course is in virginal Virgo and this aspect could leave us wondering how the divine feminine within all of us, both male and female, can ever truly be manifest. There’s something here about drawing down the Moon, about making this feminine presence a real and living force. There’s still too much separation – too much virgin/whore syndrome. Too much trying to live up to impossible ideals fuelled by unrealistic ideas of perfection. Too many lies we tell ourselves in order to ‘fit in’. We know it. We experience it every day. But grand trines don’t force us to act…

And neither do sextiles…

Sextiles in fact, show us where opportunities lie. They are like open doors. I think of them as ‘apprentice’ aspects. They are skills which are available to us. Sextiles show what we could be good at, if we care to give it a try. The motivation to go for it has to come from within – and there’s the rub. We have to want the changes promised by the trine. We have to truly want peace and love and harmony and all those nice things we dream about in order to take action on it. Sextiles are about the practice not the ‘theory.

Don’t forget, the sextile comes from the number 6 which relates back to Virgo and the 6th house. The 6 sextiles linked together form a hexagon, one of the most efficient shapes used by Mother Nature herself. Honeycombs created by bees are illustrative of the work that goes in to look after the Queen and traditionally associated with hard work – ‘busy as a bee’. 60 degrees in a natural chart from 0 Aries takes you to the cusp of Gemini. This work needs to involve the mind of the collective. Forget the Borg, we need to connect.

You’re either doing or you are not doing. You’re either taking part or you’re retreating. Venus in Virgo is saying we need to put love into practice on a day to day level. It’s the small things that count. Simple kindness counts. Sweetness, like honey is healing. Used productively, the opposition to Neptune can show that those very basic acts of love can have a profound effect on all. Not only do we need to think of ourselves as King or Queen bees, we need to think of each other that way too. At the same time, we are all workers in the hive.

In her book ‘The Women’s Dictionary of Symbols’, Barbara Walker suggests that the hexagram is a representation of the sexual union between Kali and Shiva. There’s a sweet spot with this configuration, a honey pot pulling us in and it can be tantalising and dreamy or it can be pure tantric channelling of the highest cosmic order. As above, so below, God within, God without. Can we get it together?

The way in to this pattern is through the Moon. She is the most accessible personal planet available to us and represents the people. Sitting sextile to Neptune and Jupiter-Mars, the Moon gives us a chance to connect with each other, to figure out what we truly believe – and perhaps (opposite Saturn) where we pull away from each other because of our differences. We can either set up barriers or we can tap into what connects us all. The power of faith can fuel a deep transformative process.

The Woman Of Samaria At The Ancestral Well

The last time this degree was emphasised was back in October 2012 when the Full Moon fell on the same degree. The women of Samaria is from a Biblical tale where Jesus talks with a women beside a well. The women is unmarried (or a prostitute) and generally not considered very highly in society, so she is shocked when this foreign man speaks to her. Jesus tells her that she should ask him for water but the women exclaims he has no equipment to draw water from the well. He replies :-

As you can see from this symbol, there is something here about getting back to the source and about finding one’s spiritual centre which constantly renews and refreshes. There is also a sense that nothing can’t be forgiven or washed clean. Again there is a theme of the feminine who is shunned, objectified and/or judged according to marital/sexual status. The last quarter Moon hints this must be a closing chapter.

Look to where the last quarter Moon occurs in your chart. This is where you have a chance to connect with this Greater Pattern. It is here that you can find solace and spiritual sustenance which give you the impetus to tap into the immense creative potential of this pattern.

This Grand Sextile is an offering from the cosmos like invisible lines drawn by the dance of bees from flower to flower. It is up to you to follow the thread.

The last paragraph was going to end this post but with extraordinary synchronicity, as I finished typing, a bee has just flown in through my window. He’s buzzing loudly! I’ve taken a photo of him below 🙂

Edit – Thanks KB for pointing out the he bee is a she bee! 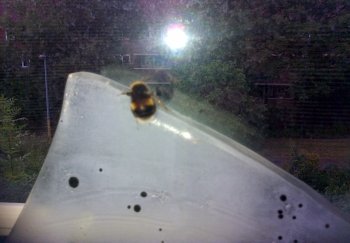