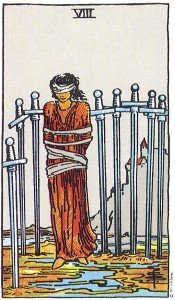 The 8 of Swords has been in my readings for too long. I’ve got to a point where I see myself taking one of those damn swords and hacking at the bindings around her just to get rid of her. I’m done. I’m done with feeling blind and bound.

My mind plays on words – with her arms bound she is armless. So she isn’t armed, she’s not defending herself. She’s letting life push her around. She’s let herself get caught up in something she didn’t want but didn’t say no. And the weight of that bind has left her feeling weakened, unable to choose for herself the next step.

Maybe she wants to be ‘armless (harmless) and not offend anyone by thinking for herself.

“No that’s fine, I’ll just wait here. No really, I’ll be fine. The bogs a bit smelly and the bindings are itching my skin but no, I’ll just stay here.”

You silly women. Walk away. Just make a step. Sure there’s a puddle in front of you but you have to get your feet wet sometime. Maybe if you just wriggle a bit, you’ll find those bindings aren’t as tight as you thought. Do you really think someone is coming to rescue you? It only happens in stories love.

Sometimes, you have to be your own hero/heroine and rescue yourself.

I remember when I was a kid, I had a skipping rope with wooden handles at the end. I hardly ever used it for skipping, I was far more interested in showing the other kids out I could free myself from any knots they bound around my hands. They would pull the rope as tight as they could and still I would release myself. For some reason, I found it therapeutic. I guess it was something I was trying to release myself from on a deep psychological level but it was a game too.

Sometimes the women in the 8 swords looks like she’s smiling, smirking even. It makes me want to pick up a pile of mud and sling it at her because she’s just standing there. It makes me furious how she just stands there and takes it!

Everything is going on at the castle behind her. There’s weddings and parties, cosy nights in beside the fire, friends coming over. There’s the safety of walls and turrets and I imagine the grand gardens behind. Sometimes I imagine the occupants looking out of the window and exclaiming to each other,

“Really? Is she STILL there? What IS she doing?”

So I try to relate to her, try to get into her skin because I know she has a message and I know she isn’t laughing at me any more than I am laughing at myself. I imagine my eyes closed and my arms bound. I think to myself, each sword behind me is a decision I made that went wrong. Or even a decision I never made – decisions that were decided for me because I was too afraid to decide for myself. I let myself be blown by the wind and now all those decisions, all those paths are dead and gone.

But they keep me stuck, because I’m afraid to move backwards or forwards because I don’t know if I’m going to slice myself on one of those sharp edges. Fear is a dangerous thing. Fear tricks me into thinking there are swords all around me but that isn’t the truth.

I recall playing Blind Man’s Bluff when I was a kid too – how sometimes I cheated by being able to see a crack of light from the bottom of the blind. I found if I wriggled my nose like Samantha in Betwitched I could move the blind a little bit to let me see. Even if I could only see the feet of one of my friends running away, that was enough.

I also found that when I did play the game properly, my senses were super-charged. My skin would tingle before sounds reached my ears. The hairs on my arm stood up when someone crept up behind me and I would giggle when I felt a breath on my cheek.

Fear is a learned thing. As a child it’s all a game. As an adult, we are left shivering with fear as old ghosts come haunting. If madam here could stop being scared for a minute and just tune in, then all the information she needs would be right there.

Maybe, she could get her bearings and follow the sounds emanating from the castle. Maybe she could find her way back home.

Yes, I’m done with the 8 of swords. It’s a rite of passage discovering that you can walk away, that you can free yourself in a blink of an eye. Sometimes, we choose to be blind because the way ahead doesn’t look that enticing. But when you’ve been in the same spot too long, the land becomes malnourished and like Alice crying her great pool of tears in Wonderland, the ground just becomes waterlogged and you shrink into yourself.

The number 8 is linked to the concept of ‘As Above, So Below’. The stars may seem constant but they are changing. The planets move in their endless orbits weaving pattern upon pattern. The 8 of swords is like a broken thread in a magic cloak and if you let it, it begins unravelling until you become afraid of your own shadow. And there we descend into the 9 of Swords…

Change is necessary and you have to face it head on – even if you feel blind to what’s to come or fear you can’t handle it. Maybe it is just a bluff.

Image – Eight of Swords from The Rider Waite deck