All hail the light! The Leo Moon is sparkling in her finery as befits the regal Lion. This chart feels completely different to the last few lunations and I have a sense of release, as if finally there is space to move and just to be.

This is what Leo likes best, the chance to be himself and show what he can do. The Leo heart delights in the applause and praise of others, just like a child shouting

Leo’s enthusiasm is infectious. We can’t help smiling. As children we want others to encourage us so that we learn to encourage ourselves. We learn where our strengths and our weaknesses lie.

I remember watching a little friend of mine walk along the edge of a brick wall. My hands were out ready to catch her if she fell – the adult instinct to protect but also to fear. But she laughed and said

And she did because fear was the last thing on her mind. All she wanted to do was show me that she was brave enough to do it. I remember thinking back to when I used to do the same, recklessly climbing up to high places, pushing the swing as hard as I could so I could jump from a higher place. And yet when I began to think of things I wanted to do as an adult, pushing myself forward, being seen, my anxiety began to kick in. I noticed the adult block over my heart – the fear of falling, the fear of failure…Somewhere along the line I had lost courage. 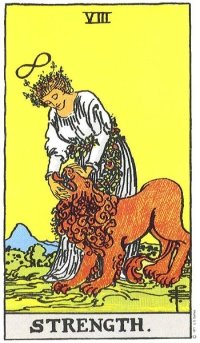 In the Tarot, Leo is represented by the Strength card. The traditional Rider Waite deck shows a woman dressed in white and covered with flowers, holding the jaws of a lion. Strength is about taming the beast within, controlling it so that it works for you rather than against you. But it is control through love and compassion rather than brute force. When you overcome fear in this way, when fight of flight is channelled into excitement, your will and drive are free to face whatever comes your way.

This New Moon has a frisson of energy from a semi-sextile to Mars. It’s a boost of morale and confidence but it’s about making it work in your favour. Semi-sextiles are mildly irritating and it’s as though Mars in Cancer is a little more cautious than usual. But the semi-sextile says don’t allow this caution to hold you back. You can be careful and brave all at once.

A fabulous trine to Uranus is what makes this chart sing and I hear the wonderful Freddie Mercury singing “I want to break free” in my head. The feeling is of electric excitement. It’s the icing on the cake topped with hundreds and  thousands and those cute little edible silver balls. You’re all fired up and ready to go! This aspect positively encourages you to take a risk. Go on! Show them what you’ve got! 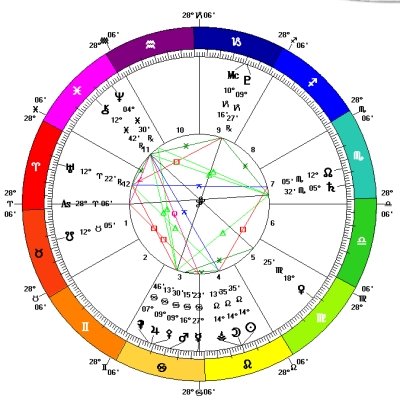 The only sour-puss in the pack is Chiron as the New Moon is quincunx the wounded healer. He seems to represent those times when you made a fool of yourself, when you bottled out because it was just too scary, when you bombed in a presentation or interview. Chiron’s a little edgy because sometimes it doesn’t work. Sometimes people don’t appreciate what you have to offer.

But you know we have to all move past that right? Because we can’t be held back by what ifs. Chiron is like someone moving into your space, blocking the Sun. Maybe you need to adjust your position a little so that you can catch the rays.

Sweet Vesta is sitting directly conjunct the Sun and Moon and I feel she tempers this energy beautifully. This is shining from the soul people! Vesta brings dedication to purpose, a sense of meaning in every action. There is a sureness about her in conjunction with the New Moon and she seems to echo the quiet composure of the maiden in the Strength card.

The Sabian Symbol for the New Moon is :-

A Pageant, With Its Spectacular Floats, Moves Along A Street Crowded With Cheering People

This Sabian has a wonderful complementary feel to it. It speaks of celebrating your achievements, taking a moment to congratulate yourself and just get into the feel-good vibe. It also reminds you to connect with others. Let’s celebrate ALL the things that we ALL have achieved.

Sure there are still some sticky aspects in this chart – after all Uranus is still square Pluto, Jupiter is just about to perfect an opposition to Pluto and all hell might break loose at any time. But the thing is, there’s always something that might put a dampener on things – for every Tigger, there’s an Eeyore.