Recently I’ve got into watching Castle after a friend pointed out that it stars the lovely Nathon Fillion from Firefly. I’d forgotten how much I like detective shows. As a kid, aside from Dr. Who and Space 1999, my favourite shows revolved around Cagney and Lacey, Starsky and Hutch and Kojack.

On the 21st October 2013, Mercury will station retrograde in Scorpio but he entered the shadow zone on the 1st October so the slow down is already in place. In fact, just ten minutes into writing this post, I received a text from the store that delivers my shopping to apologise that they were delayed! Yes, it’s that time again when communications go awry, computers get glitchy, mechanical things break and it’s really not the time to sign contracts unless you have read the small print. But for this retrograde, Mercury has an extra big magnifying glass as he mysteriously sweeps into detective mode and goes hunting down some dark alleys.

This retrograde cycle contains some extra special cosmic kick as whilst it occurs, we also have a yod on the 1st November plus an eclipse on the 3rd November. Studying this retrograde is akin to falling down the rabbit hole where everything is mysteriouser and mysteriouser…

In fact, just as Mercury slipped quietly into the shadow zone, he also formed a trine to Neptune. Now, whilst this is a sweet aspect full of imaginative power, it could also have indicated the imagination running away with itself. This Neptunian connection recurs as the last aspect before Mercury stations direct, cushioning the retrograde period in a hazy glaze of magic. It could be slight of hand or outright deception. Alternatively it could be conscious raising.

Generally, when Mercury is in Scorpio it’s time to dig deep, find out the truth and focus the mind. It’s self-analysis and a psychological question time. If something is amiss, Mercury retrograde in Scorpio is going to relentlessly hunt it down. Instead of finding out what they think, the retrograde period forces the onus back onto you. 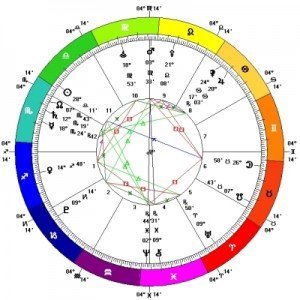 The retrograde chart shows Mercury in a wide conjunction to Saturn, trine to Jupiter, square Pallas and sextile Vesta. The trine to Jupiter has not yet been perfected and won’t be until the end of November. It’s just a sense that things could be better but at the moment, it might just feel like everything is in the dark with that conjunction to Saturn. Combined with the square to Pallas, it might feel like our timing is off and it’s difficult to plan when you don’t know what’s going to happen next. The Mercury in Scorpio is instinctual, following his nose where it leads. The problem is that sometimes we are going to be lead down some dead ends unless we listen closely. Luckily that tiny candle light from Vesta might help.

Scorpio is dark, as is Saturn and there’s an eclipse coming which makes the night seem even darker. Mercury the detective is just a little jumpy and his goose-flesh is crawling. The flickering light of the candle makes those shadows look like something else. Those echoing footsteps could be coming from anywhere. Sound is bouncing off walls, throwing him off track and voice are distorted. It’s hard to recognize where we are. The in- orb trine to Jupiter makes me think of laying down the law but it’s hard to apply the law when you don’t know what you are dealing with.

Mars as co-ruler of Scorpio is in a difficult opposition to Neptune but trine to right-hand man Pluto. On a psychological level this could express the need to root out sickness of the psyche. Mars is slowly strengthened by the trine to Pluto as the aspect becomes closer but right at the beginning of the retrograde it may be harder going. It’s akin to our detective being given a bad tip off and being sent on a wild goose chase.

A Parrot Repeats The Conversation He Has Overheard


The trouble is when you over-hear something you don’t always know the true context. There’s a stark warning here that we need the full story before going off half-cocked. Pluto in a sextile to Chiron wants to help the wounded but he’s being hampered from finding his victim.

Mercury retrograde conjuncts Saturn on the 29th October and this reminds me of the blind alley I mentioned earlier. It may feel as though everything has come to a dead stop. The candle is blown out. There’s an eerie silence in this aspect too. Sometimes you have to just stand still and listen to get your bearings and decide what to do next. Now you’re forced to use all your senses. Scorpio is finally attuned to the psychic atmosphere and now you must too.

On the 31st October, Mercury trips backwards and falls head over the upcoming eclipse point. It’s rather like our detective opening a closet only to find a skeleton falling out of it in true horror story style. The eclipse point is ultra sensitive. The veil between the worlds is thin. Old ghosts that you never expected come back to haunt you. The eclipse point could be like a twist in the tale, an unexpected development in your murder-mystery plot.

On the plus side, don’t forget Hallowe’en/Samhain is a time to honour the dead. If you  find yourself confused, upset, hurt, betrayed or simply dealing with you own internal demons – send up a prayer to someone you once loved on the other side. Re-member them. Death is not the end – it is a beginning. Re-lease.

On the 1st November, Mercury makes a conjunction to the Sun. Finally now we are seeing the light! On this day there are a raft of aspects. The conjunction between the Sun and Mercury sextiles Mars and both quincunx Uranus forming a yod in the skies. It’s as though all the clues knit together and finally Mercury knows whodunit! With all the focus on quirky Uranus, it’s like the end of Tales of the Unexpected. You may be surprised by what you learn. The trick however is to sit with this new knowledge, to absorb it, even though Mars probably want to take action. Mercury is still retrograde so the denouement is yet to come. As Uranus points out though – it’s a time of awakening. With the quincunxes in place, it isn’t necessarily comfortable however all it takes is a little adjustment to your thinking.

This date is also All Saints Day which celebrates those who have achieved beatific vision: those who have looked into the face of God. No longer are things taken on faith, suspicion and doubt is removed. Now you know.

Mercury is now edging back into that trine with Neptune. The imagination can now begin to work unencumbered by delusion and illusion. We’ve been taken to another place with the conjunction to the Sun, come face to face with both the devil and the God and now it’s time to dream a new dream. It’s lost pieces of the soul returning home and becoming consciousness.

Now that all the pieces of the puzzle have been found, now we have pieced together and resolved the issues in our own lives, the mind can begin to function normally again. The case is almost closed. There’s just some administrative work to do. Now we can begin to make plans and consider our options. We need to hold off from making any major changes until the 27th November however when Mercury finally exits the shadow zone.

Leave no stone unturned during this retrograde period. We are being challenged to figure it out, to face what needs to be faced. If you have been punishing yourself, find out what part of you believes you committed a ‘crime’. Take the time to find out the true story before laying the blame. It’s about holding yourself accountable without beating yourself up. You can play good cop or bad cop but either way it’s about solving an inner mystery. All the clues are there. It’s time to take up that big magnifying glass and see what you can see.

Image by pschubert on Morgue Files