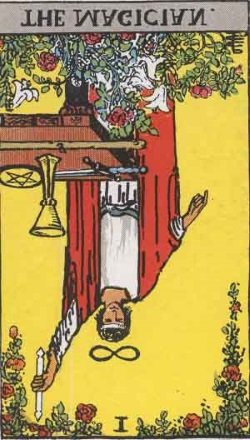 A lot of the time, Mercury retrograde has a bad rap but it can be a positive time of contemplation, re-working ideas and reviewing decisions. Essentially it’s a time to go inwards and reflect. Typically, the more you find yourself at the mercy of Mercurial tricks such as communication problems, transport issues, computer freezes and broken items, the more Mercury is pushing you to step back.

The Magician Reversed signifies the entire retrograde period. When the Magician is reversed, it may be that someone is trying to force their will on the universe. The universe however will always outwit them. The skill and talent of the upright Magician are in disarray reversed. The mind is scattered. Mercury retrograde can indicate a time when focus is hard to come by and it is only by going inwards that we can regain that connection.

In the tarot, communication problems can be shown in a variety of ways. Maybe it’s broken promises, waiting for a decision or the office gossip. When communications break down, it can be extremely frustrating. The action of not being heard or not feeling able to get your point across can be deeply upsetting. Here are the 10 cards that I have noticed in readings that deal with communication issues and have a Mercury retrograde ‘tone’ to them. Swords crop up more often as this suit is naturally aligned to issues connected to the mind and communication in general.

1. Five of Swords – Sword is an anagram of words! With this five, sharp words are indicated. Arguments and disagreements cut a divide between people. Everyone wants to get the last word in. There are no winners with the Five of Swords despite the victorious look on the face of the character in the foreground. There is always a cost. The Five of Swords indicates that there is nothing to be gained from constant arguments.

2. Two of Swords – Whenever I see this card, I see my Gemini friend jokingly covering his ears and shouting “La La La” whenever he doesn’t want to listen. This card can represent a stubborn refusal to listen to what’s really being said. It is also a card of stalemate, an argument where both sides are refusing to budge. There can be a stalemate because no one is willing to change. Compromise may be key. In one reading I did a long time ago, this card stood for someone who suffered from a stutter.

3. The High Priestess – The High Priestess can indicate that someone has a secret. It may be you or it may be somebody else. Secrets can be kept for a variety of reasons – keeping a pleasant surprise from being discovered; preferring to keep one’s counsel; privacy;  keeping information back that might hurt someone else; holding a dark secret through shame or fear. When this card shows up in issues of communication, it suggests that there is something you don’t yet know which has a bearing on the outcome. It is wise however not to jump to conclusions! Listen to your gut instincts. Silence is golden.

4. Knight of Swords – The trouble with the Knight of Swords is that he’s a bit gung-ho sometimes and says what he likes without thinking! Consequently, he can stand for the ‘open mouth, insert foot’ syndrome! Blunt thoughtless comments can be hurtful, even if that wasn’t the intention. This Knight is inclined to give someone a piece of his mind but may regret those words later down the line.

5. Five of Wands – This card is full of ideas but nothing gets done because everyone is shouting at once. Communication problems here have a competitive edge which puts people on the offence as well as defence. There can be a ‘my way or the high way’ attitude with the Five of Wands. Sometimes this is a debate turned sour. Opinionated beliefs are blocking progress. On a personal level, it can indicate that you have some great ideas but each conflict with the other.

6. Seven of Swords – ‘Liar, liar pants on fire’! This card can represent someone is telling lies. It can be everything from a little white lie to protect someone’s feelings right through to outright deception and blackmail. Paired with the Devil, this can show someone with a forked tongue. Lies cause problems further down the line, whatever the reason. The character in the card hasn’t been caught out yet, but it’s unlikely he’ll get away with it. Whether he’s found out or whether he just ends up tangled in his own web of deceit, somewhere along the line it will all catch up with him. Occasionally this card has also come up to show the feeling of being ‘guilt-tripped’.

7. Eight of Wands Reversed – What was going so well comes skidding to a halt with the Eight of Wands reversed. Maybe you’ve had lots of orders coming in for your business; perhaps you have been storming ahead with your novel. Whatever was moving fast now seems to come to a stop. Everything is up in the air. I have seen this come up to represent very typical Mercury retrograde problems such as website glitches, emails going amiss, texts sent to the wrong person and computer failure. Back up your work! If you don’t use reversals, look out for The Hanged Man combined with the 8 of Wands for a similar effect.

8. Four of Cups – Someone’s in a sulk! I’ve also seen this card appear in readings where someone refuses to listen to the signals from the universe which are pointing the way. It can be like ignoring your Guardian Angel! Shut-down and cut off, this character just doesn’t want to hear it.

9. Page of Swords – This page can represent the typical gossip who spreads rumours and feeds intrigue. The Page doesn’t tend to do this with malicious intent, even if the gossip can get them and others into hot water. Sometimes the Page can represent a child who lets an adult’s business out of the bag without realising. It can also represent children’s back-chat!

10. King of Swords – Sometimes this card can indicate feeling ‘cut off’ by someone.  Perhaps a previously warm and talkative person has suddenly cooled off. The King can indicate someone who only wants to deal with the facts. Overly emotional displays are likely to see him shut down even more. The solution is to stay cool, calm and collected.

Which cards do you find represent issues in communications? Do leave a comment…

Images from The Rider Waite Deck