Aries is the sign of a pioneer, first in the zodiac, first to peek his head through the ground after a long winter. Aries is motivated by the guts of Mars, fuelling his desires and firing him up with confidence. Aries needs this bravado to brave the unknown, to boldly go where no one has been before.

Aries is passion incarnate and driven by instinct but the soul purpose of Aries is to learn to tame this wild impulse so that it can be used to its advantage. Lit up by an inner flame, Aries is connected to divine inspiration. Creative and filled with fight, Aries dares us to be who we are.

The Full Moon lunar eclipse in Aries brings these fiery qualities into play. Eclipses can be tricky things. As the shadow of the Earth passes over the face of the Moon, there can be a sense that there is something bigger at work. Shadows and consequences in our own lives can be revealed by a lunar eclipse.

“Awareness itself is an act of transformation”
Nadiya Shah

One of the tasks of Aries is to learn ‘awareness’. It’s about being aware of how our actions impact upon other people. Self-awareness leads to healthy relationships. Aries is active, Aries IS the ‘act’. Deep awareness governs our actions, making them ‘right’ action. Awareness is what makes us able to make conscious choices. 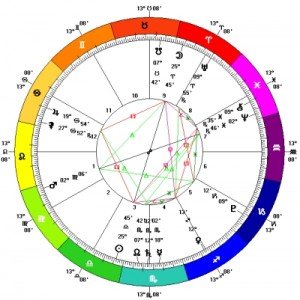 The lunar eclipse itself is semi-square Chiron, trine Mars and square Jupiter. Have previous hurts knocked your confidence or will you challenge yourself to keep moving forwards regardless? Are your beliefs holding you back? There’s so much energy here with the trine to Mars but trines can also get out of hand. The dangers in this eclipse are connected to hitting out at others, bullying tactics and over-confidence that gets people into trouble. Black Moon Lilith (true position) in a square to the lunar eclipse will have no problem with loudly calling out those who dare to put a foot wrong.

The trine to Mars however is out of sign with Mars in Virgo and Mars is opposite to Neptune. Together with eclipse semi-square to Chiron and square to Jupiter, it’s like watching a big bruiser of a guy get knocked down by a weedy lightweight. They didn’t see it coming. It’s your knee bleeding the first time you fall over; the first time you lose a battle of whatever kind. There’s something in this eclipse about being shown a weak point which challenges your beliefs about what is possible – but also challenges you to get up and live to fight another day. It could be about becoming aware of your limits which paradoxically teaches you to go further than you have gone before.

The lunar eclipse is on the Sabian symbol :-

“A Man Possessed Of More Gifts Than He Can Hold”

The thing with Aries is that it has a ton of great ideas but is not so great on following them through. Sometimes too many ideas is just as challenging as not enough. Having options is great until you have to make a decision which comes under the realm of Aries’ opposite sign Libra. The problem is that Aries wants to do everything and that’s not always possible. With this eclipse being a South Node eclipse, it may be necessary to let go of previous ideas to allow for the growth of others.

Jupiter sits on asteroid Fortuna. Here the Aries Moon must learn to really listen to its instincts in order to catch opportunities at the right time. It’s easy for it to get ahead of itself or worse, try to push too hard, too fast. This is about having the faith to know when to act – and when to hold back, not easy for that Aries energy!

The key to this eclipse is self-awareness. Whatever occurs between this lunar eclipse and the upcoming solar eclipse, pay attention. Look to the house in which the lunar eclipse occurs for a clue to the area of life which is highlighted for change. Be open to what you learn. By being aware, you learn to identify which battles are worth fighting, which ideas are divinely inspired. It doesn’t have to be all or nothing. By becoming aware, you can identify your weak points as well as your strengths. At this eclipse, become a pioneer of your own inner landscape, a spiritual warrior.

And if you fall, know that you can get up again.

Thanks to Nadiya for giving me permission to use her quote 🙂

For more fabulous astrology by Nadiya Shah including her astrology WebTV show and e-book ‘Astrology Realized’, do check out her website at http://nadiyashah.com/

Painting – The Zodiac, Aries by Erte