I planned to write about Pallas-Athena today but something about Arachne kept calling me back to her. I have a spider living nearby that looks distinctly like a false widow. She made a web on my balcony last week. This week she’s moved to the window of the stair well downstairs. I didn’t realise her breed until I started to see the news about a man who nearly lost his leg from a bite and various over-stretched media about this ‘dangerous‘ spider ‘invading‘ the UK. I thought she looked a little different to the usual balcony spider with her fat body and grey-white marks.

In truth I have an odd relationship with spiders. I’m terrified of big ones, my skin crawls when any of them, whatever size (!) scuttle nearby. But I also think they are amazing creatures. Drawing on all my Aries stellium courage, I have learned to reach for a piece of card and a glass and gently remove them to the outside. I can’t hurt one. My grandmother used to say they are lucky.

Arachne was once a beautiful princess, gifted with a talent for weaving. So skilled was her work that people compared it to the Patron Goddess of weaving, Athena. Arachne wasn’t happy to have her work compared, even to a Goddess and boasted that she was better than the Goddess herself.

Athena wasn’t impressed so disguised as an old woman, she challenged Arachne to a weaving contest and warned her not to speak ill of the Gods. Arachne accepted the challenge and dismissed the warning, whereupon Athena revealed herself. Undaunted, Arachne began to weave. She wove a scene of the indiscretions of Zeus, frolicking with a variety of his lovers. Athena wove a scene depicting her winning the city of Athens.

Whilst Athena had to admit that Arachne’s work was flawless, she was incensed by the subject of the tapestry and ripped it and the loom to shreds. Arachne was so devastated she hung herself. Athena saved her from death but punished Arachne to ‘hang’ for the rest of eternity by turning her into a spider, committing her to weave forever.

In some stories, Athena herself inflicts a mortal wound on Arachne. In others Athena fills her with guilt so that she tries to hang herself. In yet another story Arachne always refused to bow to Athena as a Goddess, even in spider form. 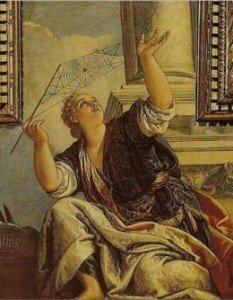 Arachne’s meaning in the chart can be as complex as a spider web. There is certainly something here about natural talent, a gift in the extreme that must be used. But there is an underlying tone that the gift should speak for itself rather than boasting about it.

It is a sad but true that most often, a natural ‘god given’ talent can also draw jealously from others. The gifted can be ridiculed as much as praised. Great gifts can sometimes make others nervous as well as envious and power plays ensue.

Whilst Arachne can indicate where you own gift lies, she also shows where you will be challenged to perfect your craft, where you must be able to do what you say you can do and where you may experience competitive clashes. If Arachne’s gifts are unused, she may turn her hunter instinct inwards, poisoning the mind with envy, biting off other’s heads! The opposite to creation is destruction.

Spider as Power Animal links to creation itself and in turn ‘fate’. Extreme talent seems to open a window into the heavens themselves. We get a glimpse of our true human potential and can be filled with a sense that there is something ‘beyond’ our experience. It is humbling and it can be frightening, hence the strong reactions of some. Whilst science seeks to pull back the veil to reveal the workings of creation, it often leads to more questions than answers. Spider medicine and Arachne  tap into the unknowable, even what ‘should not’ be known. Arachne may connect to the concept of playing God.

For many, Spider is a symbol of the ancient Mother Goddess, a divine feminine symbol.  Perhaps this is why Spider has been feared and maligned.

Arachne and Spider are also about the pattern you weave in your life – the sense you make of it, the tangles you create. It is the patience to weave and wait for your prey (your goals) to be fulfilled. The beautiful complex patterns of spider webs along with their incredible strength tap into the extraordinary beauty of the universe, the complexity and simplicity of the Greater Pattern and our part in the web of creation.

The Discovery Chart
Arachne was discovered on the 13th October 1895 by Max Wolf in Heidelberg. Spider to me has always connected to the number 13 so the symbolism of the date isn’t lost on me. Also, I find it fascinating that the discoverer had the ‘predatory’ name of Wolf. There is a wildness in ‘Spider’ as power animal and many of us react to spiders on a very instinctual level – fear. Spider is a natural predator.

As there’s no time for the discovery chart, I set it for midday. Despite the fact that the houses are irrelevant and therefore the Ascendant is most likely incorrect, I was struck by the fact at Pallas Athene showed up in the 1st house conjunct the Ascendant. It’s almost like confirmation from the universe, much like a horary chart confirms its validity through the symbolism shown. Strange.

Arachne herself was at 02TAU49 which is on the Sabian symbol :-

Natural Steps Lead To A Lawn Of Clover In Bloom

Within this symbol, there is an illusion to the natural process of creation of which Spider is a symbol. ‘Natural’ relates to the inborn talent that is associated with Arachne’s mythology. If we are ‘crafty’ to coin a phrase, we can reach our goals. Arachne doesn’t make any aspects herself, not unless I widen the orbs considerably more than I normally use for asteroid aspects. In a way, it seems fitting. No one can touch her.

It’s interesting that the closest major aspect in the chart is a square between Venus and Neptune. It’s as though it shows a mortal woman (Venus) against the Gods (Neptune). Here lies the magic – and the lies. Venus square Neptune links to the allure of the ‘black widow’, sweet poison, spells, being caught in a web of illusion.

And then there’s Pluto, perfectly square to the Nodal axis. Perhaps this shows Arachne’s desire to have the power and the control – to over-rule the rules of the Gods, to go against how it always was and how it will always be. Along with Neptune, she’s working her own spell, creating her own path – both are trine to the Sun.

How to find Arachne in your chart
Go to Astro.com and enter 407 into the asteroids which are found under the ‘extended chart selection’ option. Alternatively I can provide a list of asteroids in your chart via the following page…

Where is Arachne in your chart? What has your experience been of her or Spider Medicine? I’d love to hear your story.

If you are looking for an interpretation for Arachne in your own chart, I offer readings on the following page https://www.leahwhitehorse.com/readings/