Astronomy
Pallas was discovered by Heinrich Wilhelm Matthäus Olbers on the 28th March 1802. One of the largest asteroids in the solar system, she is also one of the most irregular shaped bodies. Together with her eccentric orbit, Pallas is rather inaccessible to spacecraft. A high axial tilt means that large parts of the asteroid are either in constant sunshine or constant darkness during summer and winter. She is part of the main belt asteroids situated between Mars and Jupiter and has a high inclination to the ecliptic. She is the head of the family of asteroids known as the Palladian Family. Pallas is designated as asteroid number 2 and her symbol represents the spear of Pallas. She has an orbital period of 4.62 years.

Mythology
Athena was born from the head of Zeus; fully grown, armed and ready for battle. Some say she was the child of Metis, Goddess of Craft and Skill. Whatever her origins Athena was a powerful Goddess and ruled over strategy, law, weaving, crafts, skill, maths, wisdom and courage. 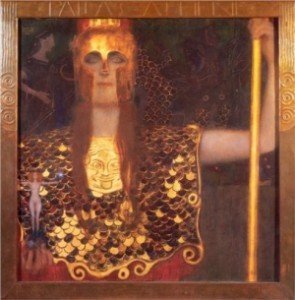 Athena took on the name Pallas as an appellation after killing her friend Pallas in a fight that got out of hand. Again, the myths vary as to who Pallas was and why Athena killed her but the essential aspect is that Athena regretted her actions and carried the name in honour – and perhaps as a reminder to never allow blood lust to
over-take her in battle.

Pallas-Athena (sometimes spelt ‘Athene’) helped many of the heroes famous in Greek mythology such as Jason, Heracles and Odysseus however although she was beautiful, she never married or took a lover. Her virginity is acknowledged in the name of her temple, The Pathenon which is rooted in the Greek for ‘virgin’. There is therefore an association with purity and clarity.

Despite her skill in battle, Pallas preferred to settled conflicts through the use of wisdom. With her understanding of philosphy and intellectual rigor, it was her nature to apply logic and reasoning to the most hotly contested disputes. Pallas remained impartial to the emotional pull of either side and looked only for the truth of the situation. Her decisions were informed and just.

The city Athens is named in honour of Pallas Athena who won the city in a contest with Poseidon after she produced an olive tree. The olive tree (or rather olive branch) has since become the symbol of peace and reconciliation.

The owl and the snake are both associated with Pallas Athene, each in themselves a symbol for wisdom. 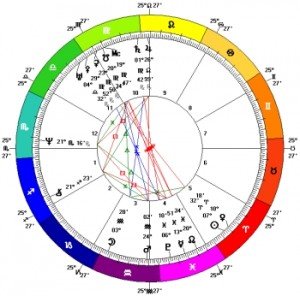 In the discovery chart, Pallas sits at the very end of Virgo between Ceres and Uranus. The connection to Ceres shows the skill Pallas attained from her Mother Metis. Her dispositor is Mercury, ruler of the mind. Mercury is conjunct Pluto in Pisces so Pallas is deeply perceptive and even compassionate however she does not allow her compassion to get in the way of her decision making. Note that the Moon is in Aquarius, known for emotional detachment. The presence of Uranus in Libra suggests the brilliance, the genius she has available to her. In Libra, she has a higher understanding of what it takes to bring harmony.

The Sabian symbol of Pallas is :-

This symbol emphasizes the fact that the judgement of Pallas cannot be swayed.

Venus sits beside the Sun in the chart perhaps alluding to a daughter born of her father, but the opposition to Pallas/Uranus shows that Pallas must have her independence. Both the Sun and Venus in Aries show the fiery creative energy that is available to this warrior Goddess. Mars opposite the Jupiter-Saturn conjunction in the chart suggests the balance that Pallas must find between all out war or a more benevolent but authoritative approach. Pallas will take action if necessary but it is an internal debate. The square from Mars to Neptune suggests that Pallas would always prefer to act for peace if possible.

Meaning
Pallas is the mind of God, gifted with powerful perception. In the chart she shows where we are able to figure things out, where we strategize, where we have the ability to use logic and reasoning along with a spark of creative understanding. I have seen reference to Pallas having the ability to recognise patterns – perhaps with her association with weaving and crafts. I would suggest too that she sees patterns of human experience and behaviour, the natural way we communicate with other. With her strong Mercury conjunct Pluto plus the conjunction to Uranus in the discovery chart, it suggests that she has the ability to understand the complexity of language. She sees both the text and the subtext, what is spoken and unspoken. She knows what to say in order to get the desired action that will benefit the whole. Her objectivity is her strength and therefore it is to her we look to when we need to tap into our own objectivity. She is the considered space between thought and action.

Her impartiality affords her the ability to overcome emotional and psychological blocks. With Mercury conjunct Pluto, deep psychological complexes are made conscious.  Pallas is conscious of her decisions and the impact they will make. In the chart, she is our creative intelligence and where we can gain clarity. With her involvement in many heroic conflicts, she may indicate where we have political acumen or strong political opinion. Pallas doesn’t sit on the fence, she looks at all sides then makes her judgement.

As the favourite daughter of Zeus, Pallas may say something of a daughter’s relationship to her father. As a fierce, virginal protector of women, Pallas also connects
us to issues around equality and the feminine principle.

With the association to Owl and Snake, Pallas may also indicate where we receive intuitive information, heavenly flashes and mind to mind/telepathic communication.
Both creatures are connected to divine/occult knowledge.