Depending on where you are along the eclipse line, this eclipse will either look like a total eclipse or an annular eclipse (the latter creates a ring of fire because the Moon is not quite large enough from that angle to cover the full disc of the sun). Hybrid eclipses are quite rare. The eclipse shadow itself will mostly fall over the African continent but will also be partially visible from some parts of North and South America and southern Europe. The Scorpio solar eclipse belongs to Saros cycle 143.

In her book Predictive Astrology, Bernadette Brady says that this saros is…

“…a gentle family of eclipses which brings a sense of inspiration…the sudden release of material from the unconscious which brings with it a great deal of insight. These ideas are good and the individual would be wise to act on them.”

So the background picture is that this is a series of eclipses that provide insight which should be acted upon. This fits very nicely with the eclipse in Scorpio (perceptive, insightful) falling sextile to both Mars and Pluto.

The eclipse itself is bound up with retrograde Mercury and Saturn and is part of a yod pattern which Mercury sparked on the 1st November. The eclipse has taken the place of Mercury so the yod is still active despite being on the wane. Uranus, already under huge stress from Pluto, is the apex of the yod. Tied in the with message of the saros itself, it really does feel like a finger of God, pointing the way ahead. But it isn’t easy. Sometimes we want to go our own way and despite something ‘up there’ giving us a friendly shove, we might be inclined to resist just because we already decided to go in a certain direction. 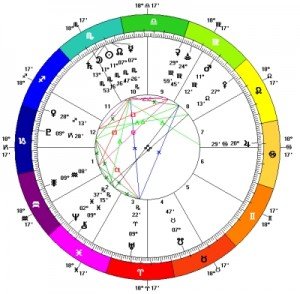 But the opportunities are plenty with the sextiles to Mars and Pluto. This is a North Node eclipse so it’s pulling us forward. With Saturn, it’s saying we must do the work. A solar eclipse is an amped up New Moon – it’s time to make a start.

The eclipse is conjunct asteroid Deucalion. Deucalion was the son of Prometheus who warned his son that a great flood was coming. The Gods were intent on punishing mankind for its sins. Deucalion listened to the warning of his father and built an ark and consequently survived the flood with his wife. As the last two humans on earth, they were shown how to repopulate the planet by throwing rocks behind them that became men and women.

The eclipse on Deucalion reminds us that we can weather the storm ahead (and I swear to the Gods as I wrote that sentence there was just an enormous crack of thunder!). By listening to our own internal warning system and tuning in to our own intuition, we can become aware of the right action to take, just as the Saros advises.

The eclipse sits on the Sabian symbol :-

An embassy, typically is the place you go for diplomatic immunity. If you go to the US embassy in the UK, once inside your are back on US turf. The Embassy can be a safe haven, much like the ark Deucalion built.

But there is a more subtle side to this Sabian, that of loyalty. The ball is only open to those who are officially invited. There may be something here about class and social divides. On an inner level, it’s about checking in with yourself where your own loyalties lie – whether it is to individual people, causes and groups or a country. Who or what are you inviting in?

Scorpio as a sign is fiercely loyal but you have to earn his trust. Once you have it, it’s for life but God help you if you break that trust! The eclipse may bring up issues connected to who and what to put your trust in.

Without a doubt, there are strong planetary energies at play during this eclipse but there is also a feeling of protection too – much like a ring of fire which can ward off any overly aggressive demons! But it’s also up to us to activate these energies by be willing to engage with them.

As I finish this post, an email from New Scientist has just dropped into my inbox. The headline is “What happens when we can’t hide who we are anymore?” That indeed is a question for this eclipse.